Nigeria, Togo, and Benin have recorded the lowest petrol costs per litre in the West African sub-region as Africa’s biggest economy’s subsidy payment increases, a new analysis by Zutobi Ed, an international driver’s education organization based in the United States, has revealed.

According to the International Driver’s Education Company’s worldwide fuel index study, Nigeria has the lowest fuel cost per litre in the sub-region at N185.3, followed by Togo, Benin, and Sierra Leone with N397.5, N400.8, and N494.278, respectively, as of May 7, 2022. In Nigeria though, the official pump price at many fuel stations ranges from N162 to N165, about N10 lower than the price quoted in the report.

Also, using the quantity of petrol obtainable in liters for $50 (N20,759.75) and the number of miles one can travel in a Toyota Corolla, the company reported that one buying 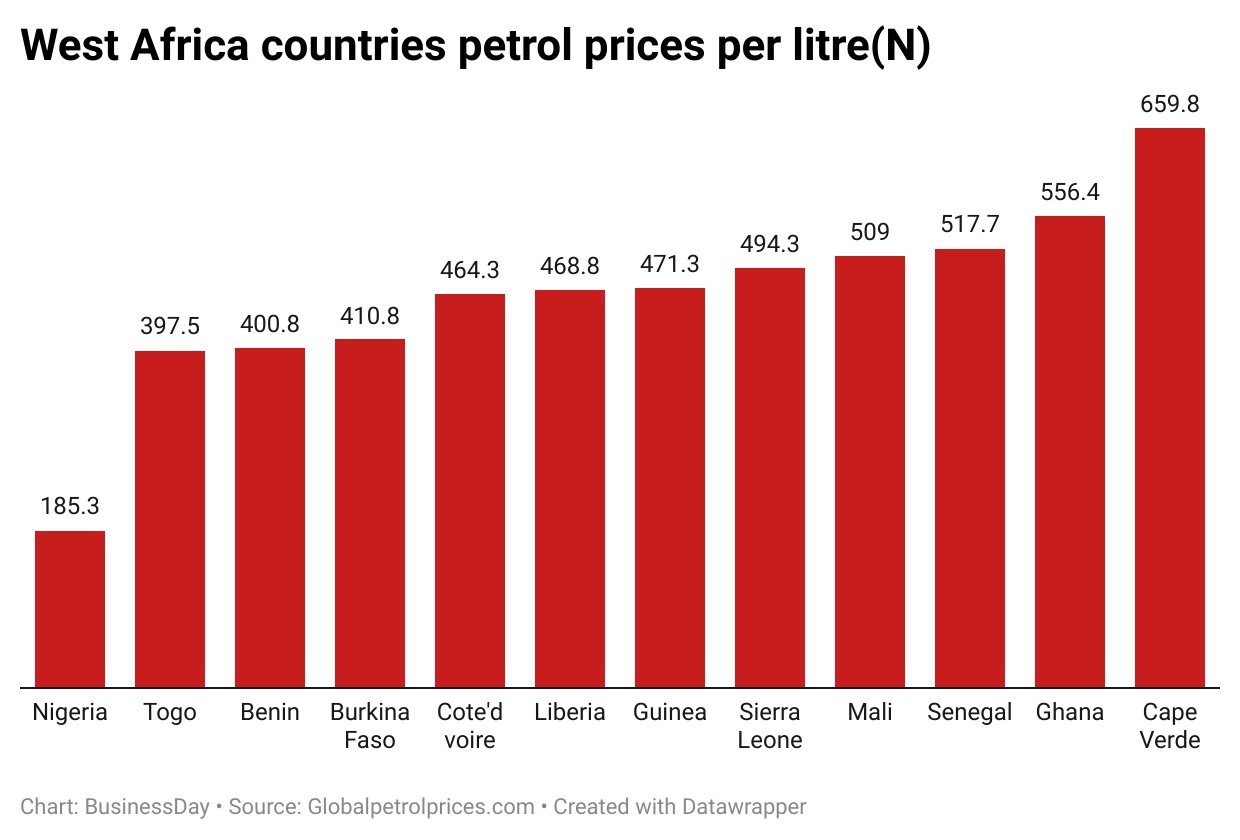 The Toyota Corolla is the best-selling car in the world, according to the research, therefore it was used to assess how far you can travel in each country on $50 worth of petrol.

“The petrol-powered Corolla has a Miles Per Gallon (MPG) of up to 44.8, and therefore the number of gallons you can buy for $50 was multiplied by this figure to discover how far one could travel.

“Of course, the cheapest countries are the ones where you can travel the furthest for $50.”

Outside of the West African Region, Libya has the cheapest fuel per litre at N13.02, followed by Algeria and Angola at N131.85 and N164.04 respectively.

While this is true, Globalpetrolprices indicated that the price discrepancies between countries are attributable to differing petrol taxes and subsidies.

In international markets, all countries have access to the same petroleum prices, but they apply various taxes or shoulder the expense through subsidy payments.

African governments are also rethinking their energy subsidy programs. Taking away fuel subsidies is a thankless task for the government, particularly in Sub-Saharan Africa such as Nigeria.

According to presentations to Federation Account and Allocation Committee (FAAC) meetings seen by BusinessDay, Nigeria, Africa’s largest economy, has spent a total of N675.937 billion on subsidy expenses.

This, according to the approved 2022 budget, has shown that Nigeria will be spending an equivalent of 74.07 percent of its capital expenditure for 2022 on subsidy payments.

This would mean the country has spent 68.1 percent of the value of its capital expenditure on subsidies in the last fourteen years.

There are fears that given the increase in subsidy bill, the country may find it hard to meet its fiscal needs and subsidy payment may shortchange the country on other developmental needs that could have been enjoyed by residents of the country.

Analysts have also said that the subsidy cost is denying the country value that could have accrued from higher oil prices.

In addition to this, energy subsidies are often regressive overall, with over 80 percent of the total benefits accruing to the richest 40 percent of households, according to a global analysis by the International Monetary Fund (IMF).

“Fuel subsidies are a costly approach to protecting the poor due to substantial benefit leakage to higher income groups,” argue IMF in a report.

“In absolute terms, the top income quintile captures six times more in subsidies than the bottom.”

Also, a report by the World Bank has shown that the Premium Motor Spirit (PMS) popularly known as the “petrol” subsidy distorts efficiency incentives, promoting its non-essential or inefficient use.

It said, “The subsidy also creates a very large price differential between Nigeria and neighbouring countries that encourages smuggling, benefiting criminal syndicates at the expense of the public,”

However, the Word bank said that while some of these weaknesses can be mitigated through improvements in the design of the policy, no version of the PMS subsidy would be superior to its alternative.

Abuja-Kaduna train: We met all terrorists demands they failed to release all victims…