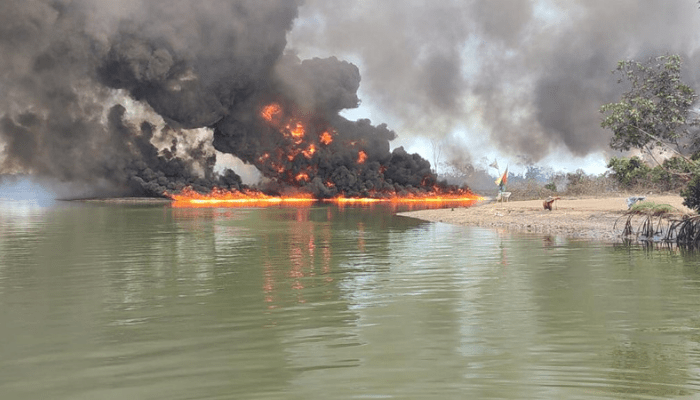 Eroton Exploration & Production Company Limited has confirmed an uncontrolled flow of hydrocarbons with wildfire into the environment.

The incident occurred in wells AKOS004L/S and AKOS014L/S of the Akaso field and was observed by members of the community on October 1, 2022, the company said in a release.

AKOS004 was completed as a dual string well and came on stream in May 1994. It was subsequently shut-in December 2020 for well integrity repairs. AKOS014L/S on the other hand came on stream in 2005 and was also completed as a dual string which was quit in August 2018, and subsequently followed by vandalization of the wellhead accessories by third-parties.

“These wells were observed to be releasing uncontrolled flow of hydrocarbon into the environment with wildfire due to the suspected compromise and vandalization of XMAS Tree containment valves of the wellheads, presumed to be from illegal bunkering activities,” she said.

This is the fourth incident of confirmed and suspected sabotage and vandalism in the last three months experienced by Eroton Exploration and Production company Limited and the company said it is snowballing into an existential threat.

“The AKOS004L/S and AKOS014L/S flow was discovered to be coming out from the short string flow arm of both wells. A cursory look at the wells from a distance show the absence of some wellhead valves on the body of the XMAS TREE,” she said.

According to Max-Ebibai, Eroton had duly informed the requisite regulators and their host community through the designated Cluster Board of the incident accordingly and the Eroton Emergency Response Team have been working around the clock to abate the situation.

The company spokesperson also said that a Joint Investigative Visit with key stakeholders and members of the press was being planned in earnest.