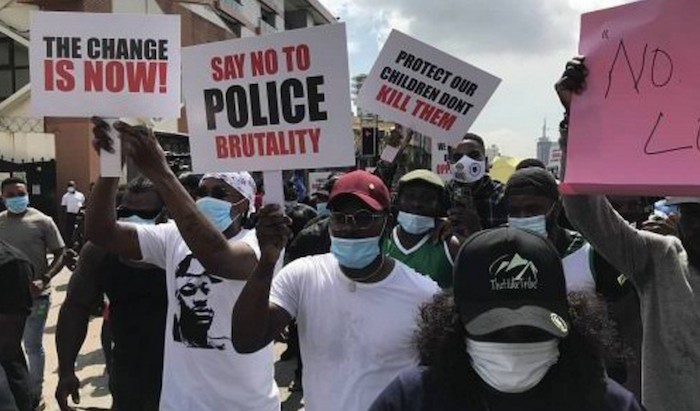 One Kenechukwu Okeke, an activist, has dragged some Nigerian celebrities and influencers, who participated in the #EndSARS protest that rocked the country in October, to Abuja Chief Magistrate’s Court, accusing them of “misdemeanor”.

Okeke said through the action of the protesters, his properties were destroyed.

He said he was pursuing the case “in the interest of defence, public safety and public order”.

Among those Okeke dragged to court include musicians Davido, Banky W, Paul and Peter of the defunct Psquare, Yemi Alade, Burna Boy, Tuface, among others.

Okeke in his statement of claim said between Oct. 28 and 30 this year, the defendants conspired among themselves to commit “misdemeanor, to wit: promoting or acting in such a manner with intent to assist in the promotion of unlawful assembly under or composition of #EndSARS”.

He said the offence committed by the defendants was punishable under Section 97(2) of Penal Code Act, C53 Laws of the Federation of Nigerian, 2004.

Okeke tweeted via his verified Twitter handle: “Having initiated criminal proceedings against the #EndSARS riots promoters at exactly 1052hrs WAT, 09/11/2020, we shall ensure that same is diligently prosecuted in the interest of defence, public safety and public order. The Federal Republic of Nigeria is country of laws.” — KeneChukwu Okeke (@HumanRightsNG) November 9, 2020.

Okeke stated further in his claims: “That 1 to 50 accused persons with intent to carry out some common purpose, assemble in such a manner, or, being assembled under the composition of ‘#EndSARS’, as to cause persons in the Federal Capital Territory Abuja to fear on reasonable grounds that such assembly needlessly and without any reasonable occasion may provoke other persons tumultuously to disturb the peace.

“a. Properties (movable) belonging to the complainant was egregiously destroyed by some riotous and tumultuous person (s) instigated and incited by the 1 to 50 accused persons.

“The averments as espoused in this complaint is not intended to be a complete recitation of all the applicable facts in issue or relevant facts relating to the conspiracies to assist in the promotion of an unlawful assembly (#EndSARS) riots, and shall not be deemed to constitute a waiver or relinquishment of any of the complainant’s constitutional right to fair hearing all of which are hereby expressly reserved including complainant’s right to tender all available computer-generated evidence by virtue of Section 84 of the Evidence Act.”

#EndSARS: Analysts want severe punishment for those indicted in report

EndSARS Anniversary: Why we protest, our aspirations for Nigeria