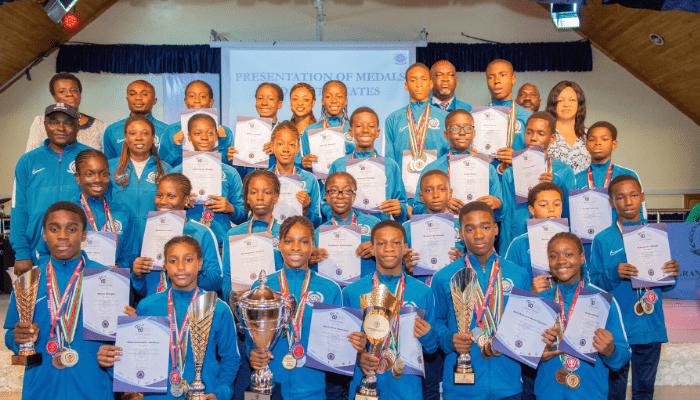 The 2020 World School Games in Dubai is an international competition for schools to showcase the talent, diversity and sportsmanship of school students around the world.

The team which excelled across all categories won a cumulative total of twenty-eight (28) medals and all twenty-four (24) team members received gold medals as overall winners of the games.

They outperformed 18 other schools from around the world and five other international schools from Nigeria as they accrued a total of 53.5 points, the highest from any of the participating schools, securing their victory as Champions in athletics, swimming and football.

Okechukwu Obi, director of activities at Grange School Lagos, while speaking about the victory said, “I know how much work and passion these students put into preparing for this competition, this is what makes this victory so heart-warming and inspiring. I am so proud of every single one of them; this victory proves that hard work and dedication pays, and I know they will carry this victory as a symbol of hope and perseverance throughout their lives.”

Abra Stoakley, Head of School said “When I watched as our team was announced Champions of the World, I was so proud and excited and I thought that my heart would explode. My pride in our team’s outstanding performance also extends to every student in this school whose support and cheer kept the team going and inspired them to victory. This is a victory for us all.”

According to Stoakley, “Grange School Lagos, now in the global spotlight for sports competitions, is inspired by this victory to participate in future editions of the games and hopes to continue in its winning ways.

Obi further said the theme of the competition, today’s Champions. Tomorrow’s Leaders,” hold true for the team from Grange School Lagos because they not only participated, but broke an existing record in the triple jump category, and coming first in the athletics and swimming category, and second in the football category.

Educationist calls for child-centered learning to groom next generation leaders