Modupe Adeyinka- Oni, the founder, and proprietress of Standard Bearers School (SBS) in Lekki- Lagos has advocated the ‘Brilliance Plus’ factor as the tool to bring out the intrinsic worth of a child in this 21st-century economy.

Adeyinka- Oni disclosed this during the 25th-anniversary celebration of SBS when she said that mere academic brilliance is not enough to assess the real, intrinsic worth of a child.

“The 21st-century economy is a global marketplace of goods, services, information, and ideas, and it demands more than just academic brilliance; it demands ‘Brilliance Plus’,” she said.

According to the educationist, it is that X-factor that has over the years set the students of SBS apart and above their contemporaries.

The school, she said, has long departed from the norm of ranking students according to their grades or positions in examinations (1st, 2nd, 3rd, etc.). These positions and attending grades do not really determine their trajectory in life or their bottom line in business.

The phenomenon in the real world of first-class academic stars working for third-class graduates has become something of a cliché. “I want that third-class student that can innovate and create, who is daring and believes in his/her abilities.

“I don’t want the first class that is going to say ‘Yes sir’ to a boss all the time. I am building leaders. That’s why I put them on the stage – in readiness for the bigger stage of life,” she noted.

In her remarks on the occasion, Adeyinka- Oni said the school’s comeback from the Covid-19 pandemic was a testimony to the Biblical affirmation that weeping may endure for a night, but joy cometh in the morning.

She expressed her gratitude to God for guiding and guarding the school and its community through the worst of the pandemic. 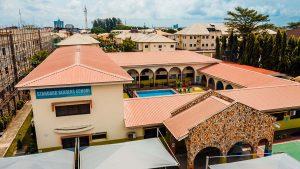 Describing the worldwide plague as a ‘beautiful time’ for SBS, the proprietress said the period of lockdown and restrictions gave the school the opportunity to reinvent itself anew, step up its game, and do everything that was hitherto attributable only to technology.

Adeyinka- Oni paid tribute to members of her staff for their dedication, loyalty, and professionalism, recalling her personal engagements with them and the students as they undertook various projects. She defended her insistence on always seeking out the innate creativity of each of her wards.

“I don’t know what your children are going to do tomorrow,” she told the parents who turned out in their numbers for the occasion, “but my job is to ensure that I put in them the seed, and they understand that they can be anything they want to be and that there’s no limitation,” she said.

To this end, she said, she has set a pattern of putting these children on stage from the tender age of 2 and encouraged them to perform and showcase communication skills alongside their creative side.

This policy, she said, is informed by the fact that she is a creative person herself, and one who has reaped immense benefits from her creativity.

The serial leader expressed confidence that the future of SBS would be even more glorious than its past. The journey toward that future, she said, will take a turn that nobody can imagine.

A teaser about what that future will look like in the coming days is a full-scale school production scheduled to take place at either the MUSON Centre or Terra Kulture (both in Lagos) in December 2022, in which both parents, children, and staff will share the stage.

The enterprising educationist urged parents and guardians to be prepared to be part of the success story on that day.

“It’s is not just for children; it’s the whole community,” she noted.

Recalling the school’s production of The Lion King (a remake of the Disney classic) about a decade and a half ago, she said that production had set a standard and became a reference point.

One of the life-long values which Adeyinka- Oni has successfully imparted to her students over the years, young and old alike is that of entrepreneurship. This, according to the life coach is informed by the need for everyone to have multiple streams of income, whatever one’s background, current income level, and age.

Standard Bearers School (SBS) is a Nursery & Primary school founded on January 7, 1997, to raise a Godly generation of tech-savvy leaders who understands the power of embracing their talent as a key success factor for their future.

2023: Why restructuring should be major campaign issue

‘Every Indian is a brand ambassador in Nigeria for his country’