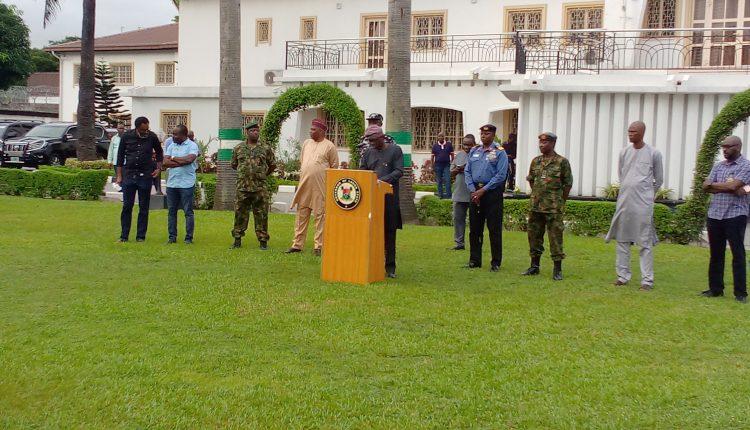 Governor of Lagos State Babajide Sanwo-Olu says the road ahead the fight to defeat the Covid-19 pandemic will be tough but not insurmountable.

He made the declaration while giving an update, Saturday, on the measures being taken by the state in collaboration with the federal authorities to contain the spread of the deadly virus, saying, however, it was not all about bad news, as more patients are recovering and being sent home from the isolation centre of the Infectious Disease Hospital, Yaba, Lagos.

“Fellow Lagosians, let me, again, seize this opportunity to remind you all that while the road ahead remains long and uncertain, I must however tell you that the bulk of the battle is fought and won in the mind.

“We must condition our minds and reinforce our psyche to take on that of a winning approach. By this, I mean that we must begin to picture life after this pandemic and a return to normalcy. We must continue to reassure ourselves that we are not weaker as a unit, but much stronger and our confidence lies in the fact that, working together, we have and will always emerge victorious.”

To win the battle, the governor said every citizen and resident of Lagos must show resilience and cooperate with the government by obeying the stay-at-home directive and shun large gatherings.

He said as a sign that the state can win the battle, one more patient of the virus had been discharged from the isolation centre.

The latest patient discharged on Saturday, April 4, brought to 25 the number of recoveries since the index case of the deadly virus in Lagos in February.

But as more patients are recovering, additional cases of the virus are being recorded in the country, as the Nigerian Centre for Disease Control (NCDC) announced late Saturday that the country now has 214 confirmed cases, with five new cases reported that day. Lagos accounts for  109 out of the number.

Sanwo-Olu announced new measures to cushion the effect of continuing knockdown on the state targeted at emergency cases.

According to him, while the knockdown lasts and throughout the month of April, all emergencies including accidents, deliveries by pregnant women and admission in any of the 27 state-owned general hospitals and other public health facilities would be handled free of charge.

“The Lagos State government will, for the duration of the restriction on movement, take full responsibility for the medical bills of all patients who fall in the following categories, at all Lagos State-owned secondary healthcare facilities:

“What this means is that, at this time, patients with the above-listed conditions will not need to pay to access treatment and care at all our 27 general hospitals across the state,” said Sanwo-Olu.

He explained that the state would continue to work with the federal authorities, represented by the Presidential Task Force on Covid-19, the Federal Ministry of Health, and the Nigeria Centre for Disease Control (NCDC) in addressing the challenges posed by the pandemic.

Answering question on the possibility of extending the current 14-day knockdown on Lagos, Ogun and Abuja to curtail the spread of virus, the governor said that only the Federal Government which announced the lockdown could review it.

He explained, however, that the movement restriction was yielding positive results, as the NCDC “has told us that they have been able to take advantage of the absence of traffic on our roads to make appreciable progress in their contact tracing.”

He added: “I would like to thank everyone who has dutifully obeyed the instruction to stay indoors, resisting the temptation to defy these directives that have been made for the good of all of us.”

Sanwo-Olu, notwithstanding the increasing number of cases being recorded in the state, was optimistic that all the patients will continue to enjoy excellent care being offered by the medical officials, who deserve credit for their heroic exploits on the frontlines of this battle.

“On behalf of all Lagosians, I thank our medical and emergency personnel, and all our ad-hoc staff and volunteers. When the story of this brave fight against Covid-19 is told, there is no doubt that your sacrifice, service and heroism will feature prominently.”

He reassured of his government’s commitment to continue the distribution of food and other essential items to the vulnerable citizens, saying this has started making positive difference in the lives of many of the beneficiaries, though there have been hitches in the implementation.

“I must also acknowledge that there have been hitches and snags in some aspects of the implementation this. This is not as though we never envisaged teething problems along the way, but I must tell you that our major focus was to roll out without delay and fine-tune the modalities as we continued with program expansion.”

“What we however did not reckon with, was the extent to which some people would go to deliberately undermine and sabotage a programme intended to bring succor to the poorest among us. This kind of malicious behavior is unacceptable, and we will leave no stone unturned in ensuring that all the culprits are identified and appropriately punished.”

“I must assure you that we have since returned to the drawing board for a more superior strategy to ensure that this laudable programme is not compromised by the sheer irresponsibility of a few, and that the full palliative impact is realised across the state,” said the governor.

Sanwo-Olu warned those violating the stay-at-home directive to desist, as the security agents now have full instruction to enforce it 24/7, stressing that the road ahead remains tough.

LEFT TO SUFFER (II): From Boko Haram’s Bedroom Plaything TO…