Covid-19 workers protest over termination of appointment, non-payment of allowance 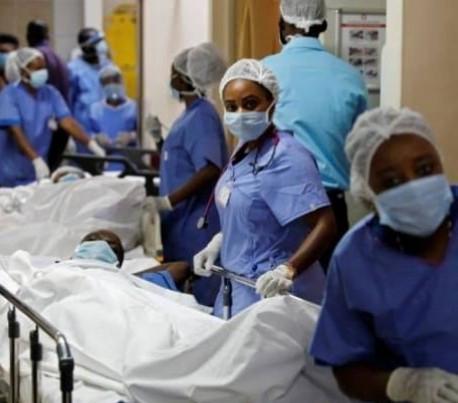 No fewer than 200 Health personnel in Edo State Coronavirus (COVID-19) response team on Tuesday protested the termination of their appointment by the State Government.

The personnel also protested against the non-payment of their two months allowance.

The health personnel who worked as mobile screening staff blocked the entrance of the Edo State Health Management Board, thereby preventing movement in and out of the board’s premises .

The screening team which comprised medical doctors, health personnel, contact tracers, data collectors among others, were employed as adhoc staff to trace people who have had contact with COVID-19 patients, all in a bid to ramp up testing in the state.

The spokesperson of the protesting mobile screening staff, Ojei Emmanuel alleged that they have been treated with disdain, lack of pity and compassion.

According to him, to our greatest surprise after working for two months we received a WhatsApp message from the Incident Manager COVID-19 mobile screening exercise, Andrew Obi, disengaging us from duties without due payment of monthly allowances.

“Andrew Obi, the incident manager COVID-19 mobile screening team sent us a message without showing his face and that is not a credible act by any person.

“I come from a distance, I pay N600 on a daily basis for transport fare, and I have been doing that for 61 days.

“We just came in today to find out that we have been relieved of the job and we have not been paid for two months. We have 26 groups containing about eight persons per group. There are group leaders in each group.

“The state government agreed to pay us 3,000 per day which amounts to N90,000 per month but none of us here have ever received such an amount of money as stipends”,he said.

Another staff who simply identified himself as Philip said some of them have tested positive for COVID-19 in the line of duty.

“We had over four of our colleagues right inside the isolation centre. Many of us can not even hug our children at home. This is inhumane and should be addressed. The COVID-19 response team faced a lot of dangers.

“What we have in Edo as a government is a funny one, you can imagine a government that does not want to pay those who worked for them. The government said it had so far spent over one billion naira on COVID-19 but are unable to pay those that actually did the job.

Recall that the Edo state government COVID-19 response team led by Edo state governor, Godwin Obaseki earlier set up the mobile screening with a target to screen and test 500,000 and 15,000 persons, respectively.

Reacting to the protest, the State Government said the staff would be paid their outstanding allowance after the conclusion of the vetting of their payroll.

Special Adviser to the Governor on Media and Communication Strategy, Crusoe Osagie, in a statement, said the taskforce was demobilised after the state exceeded its target to screen and test over 500,000 and 5,000 persons respectfully.

“The screening exercise was massive and crosscutting. The officials were inundated with lists of persons, who were said to have participated in the exercise. So, we are carefully vetting the lists before making the final payment. The outstanding allowances would be paid before the end of the week”,he added.

He however, assured that the delay in payment of allowances was as a result of the vetting of the list of volunteers and other frontline workers, which would be resolved within the week.