Coronavirus: There Will Be No Lockdown In Oyo, says Gov. Makinde 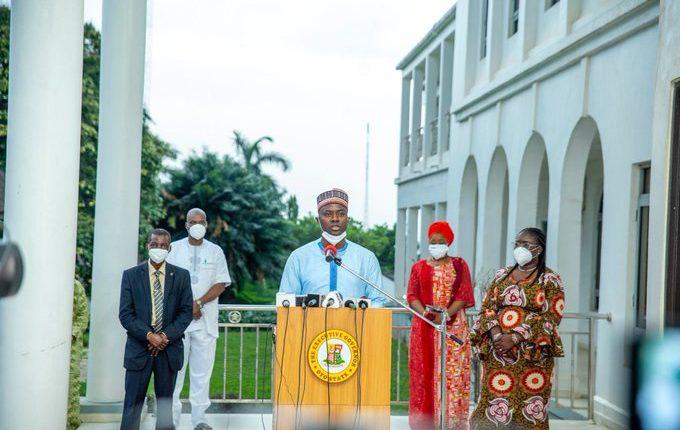 Governor Seyi Makinde on Monday said there will be no lockdown or restriction across the state during the distribution of palliatives for people which will kick off this week.

This is as the governor linked close to 60 percent of the COVID-19 cases recorded in the state to the University College Hospital, Ibadan.

Speaking during a live call-in radio program in Ibadan, Makinde stated that the initial suggestion of lockdown by the state commissioner for special duties, Bayo Lawal and members of his committee in charge of palliatives envisage rowdiness during the exercise.

On the decision to order civil servants from level 13 and above to resume,despite the fact that the state is yet to reach a peak in the number of confirmed cases or experience a continuous fall in the number of confirmed cases, he said “I will leave the technical details to the expert, the decisions were made from experts’ advice, and don’t forget that the Oyo state COVID-19 taskforce is made up of several professors, epidemiologists, virologists, and people with a background in health”.

“We are in this for a long haul and our output should not be like flipping a switch, our output will be with us for a while and that is exactly what we are doing. I mean consciously we are going out saying let this category of people resume, let the market work, let the farmers take advantage of this planting season.”

While saying it is in the best interest of the people of the state noted that “the economic health of the state is as important as the public health”.

As the state had only tested 610 samples as of Sunday out of a target of 10,000, he said “we will keep on testing, this (COVID-19) is not going to go away like yesterday and that is exactly what I have been telling a lot of people that”

“As I have often said, we have to find a local solution. We can’t keep making reference that this United States of America, how about other parts of the world? You have to compare what people have done right. America should not always be the point of reference, there are other places in the world doing far better than America.

“We should only borrow from things that will work for us and that can come from any part of the world. It can come from as near as Ghana. Ghana has just lifted its lockdown, they are moving on with their life.”

“Okay, you have given palliatives out and this is the direction that you are going to go, in a manner that you are flipping a switch on and off. No, it’s not going to go that way. I think we need to look at this in terms of light dimmers where we can turn the nob and the light may be bright or you may turn the light.

He therefor appealed to people of the state, especially the opposition, to shun the spread of false alarms because the state needs to build an economy that investors can trust.

On the controversies surrounding the bags of rice returned to the federal government through the Nigeria Custom Services, the Governor said immediately the issues with the rice was discovered, he put a call through to the Chairman, Nigeria Governors Forum who is also the Ekiti state Governor Kayode Fayemi to find out but was surprised when Fayemi also confirmed that it was also same in Ekiti.

Governor Makinde stated that the state government will not waste its resources in disposing the rice hence the reason he returned the rice to the federal government through Nigeria Customs.

He however added that Amotekun will come on board soon to complement the efforts of security agencies in the state.

The governor also stated that the state government is ready to assist media houses in the state especially those that had contributed positively to the COVID-19 campaign since it began weeks ago.

Meanwhile ,while making it clear that all manners of people go for treatment at the UCH, he pointed out ,that a high percentage of the confirmed COVID-19 cases in the state came from the hospital.

According to him,the three additional cases and the fatality that occurred in the state yesterday (Sunday) are all linked to UCH. Almost 60 per cent of the cases in Ibadan is linked to the place but I feel they have been a little bit defensive. I had reached out to the CMD.

Makinde disclosed that the Federal Ministry of Health has sent a letter to all federal tertiary teaching institutions to work with their respective states saying “we have opened a line of communication with UCH, It may not be fantastic but it is open and we are brutally frank with ourselves”.

Apart from reaching out to UCH management, he said ,the state government has asked the teaching hospital to bring somebody as a representative to work on the COVID-19 Committee.

” We are asking them to work with our Commissioner for Health on accreditation and setting up of isolation centres.” he added.