…Untested lawmakers on the loose 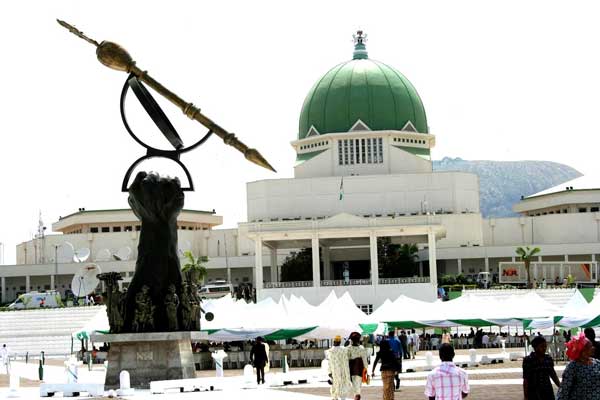 Palpable fear has gripped most residents of Abuja, Nigeria’s seat of power, as a former Managing Director of Pipelines and Products Marketing Company (PPMC), Suleiman Achimugu, has reportedly become the first to die of the dreaded Coronavirus in Nigeria.

The former PPMCchief, who reportedly died over night from the virus in Abuja , was said to have returned from the United Kingdom two weeks ago.  According to family sources, he started exhibiting symptoms on Tuesday even as his family reported his condition to the Nigerian Centre for Disease Control (NCDC).  The family said officials of the NCDC came to the house and took his blood specimen but they never got back to them.

The family said further that as of Sunday afternoon, he was coughing profusely, so they called the NCDC to inquire about his results, which turned out positive.  They (NCDC) picked him up and rushed him to Gwagwalada and he reportedly died at 2 am Monday morning.  His family is currently under quarantine in their house as the NCDC reportedly handled the burial.

The late former MD according to sources had mixed up with so many people on his return from the UK. He was said to have attended several meetings, met with so many friends, visited pubs and supermarkets and many others who might have been infected.

Just as the FCT residents were grappling with the first death of a high-profile personality from the virus, it has spread so fast, sparing no one.  Another high-profile confirmed case of the disease is the son of former Vice- President Atiku Abubakar, Mohammed, who tested positive to the virus, bringing the number of confirmed cases to over 35 in the last two days.

The Presidential candidate of the People’s Democratic Party (PDP) disclosed that his son’s status via his verified Twitter handle late Sunday evening.

“My son has tested positive to coronavirus. The @NCDCGov (Nigeria Centre for Disease Control) has been duly informed, and he has been moved to Gwagwalada Specialist Teaching Hospital in Abuja for treatment and management. I will appreciate it if you have him in your prayers. Stay safe, coronavirus is real,” he wrote on Twitter.

Atiku’s daughter, who also confirmed the incident said in a video  that it “is now a public knowledge that my brother, Mohammed Atiku Abubakar has contracted the coronavirus and is being treated here in Abuja.

“We as a family are very sad and hopeful that he will get well very soon. We are thankful for the quick intervention of the NCDC, and for now this is what we as a family have to say.

“We will ask that all malicious and insulting messages being sent around to insinuate a deliberate action by my brother to spread this disease knowingly be stopped immediately. We must come together as a people to fight this virus.

“I would like to draw people’s attention to good hygiene and social distancing; it is important and vital that we apply these in our lives more than ever,” she said.

According to sources, the estate where the former Vice President’s son lives has been quarantined on Monday as fears have spread that the victim may have come in contacts with hundreds of other people, who may have contracted the virus.

These two incidents and others breaking out have heightened anxiety and tension in the FCT as residents bemoan their fate in the wake of the deadly virus that has killed over 13,000 people globally with over 300,000 confirmed cases worldwide.

There is additional panic that erupted in the FCT when some members of the House of Representatives were said to have returned from some of the high risk countries and allegedly refused to subject themselves to screening at the Airport.

Following this development, the Presidency on Monday raised the alarm over the refusal of the lawmakers to do the screening which is one of the precautionary measures against the dreaded Coronavirus pandemic.

Chief of Staff to the President,   Abba Kyari, in a letter to the Speaker of House of Representatives, Femi Gbajabiamila, sighted by journalists, asked the House leadership to direct Members to comply with the safety measures at the Airport.

“It has been brought to the Honourable Minister of Health recently reported to this office that some members of the House of Representatives are refusing to subject themselves to medical screening at airports.

“As you are aware, these airport screenings are our primary line of defense and refusal by any citizen to subject to these tests is a threat to our nation.

“Accordingly, you are kindly requested to direct all members at the House of Representatives, who returned to Nigeria from foreign trips to report themselves to the nearest NCDC test centre with immediate effect”, the letter read.

Meanwhile   BusinessDay on Monday gathered that some staff and journalists covering the National Assembly are scared of going to work as on Tuesday.

There fear is even intensified by the alarm raised by the presidency about some members of the House of Representatives, who have refused to be tested and possibly quarantined.

BusinessDay checks showed that the lawmakers that travelled abroad and returned in the last two weeks are coming to office, attending plenary as well as committee meetings.

There are particularly serious agitations by journalists covering the House of Representatives particularly as the Chairman of Media and Public Affairs Committee held briefing with them few days after his return.

“The Kalu matter is a serious issue; there is a need to have updated from him. A lot of our colleagues met with him before he even came to brief us and we know what that means”, one of the journalists remarked.

Also, Secretary to one of the lawmakers who travelled recently said he has been leaving in fear since the return of his boss from one of the high-risk countries, saying he is relying on God for intervention as the lawmaker is no longer coming to office.

Similarly, the fear of the spread of killer virus has forced the National Chairman of the All Progressives Congress (APC), Adams Oshiomhole to close down the National Secretariat. Oshiomhole said the closure was in compliance with the Federal government’s directive that people should stay away from large congregations and social gatherings.

As soon as this announcement was made, the staff vacated the Secretariat leaving only security personnel back.

Meanwhile, the Governor of Bauchi State, Bala Mohammed has gone into self-Isolation, after he had contacts with the son of the former Vice President, Mohammad Atiku Abubakar.

According to a statement signed by Mukhtar Gidado, Senior Special Assistant to the Bauchi State Governor on Media, sighted by newsmen, he said his principal shook hands with Atiku’s son recently in Lagos.

“This development is sequel to the report from the Nigeria Centre for disease Control (NCDC) that the son of the Former Vice President of Nigeria, Mohammad Atiku Abubakar has tested positive to the coronavirus upon his return from an international trip through Lagos.

“It would be recalled that Governor Bala Mohammed who also recently returned from an official Trip in Lagos, met with Mohammed Atiku Abubakar in the Aero Contractors aircraft where they shook hands and exchanged pleasantries.

“So far, the Governor did not exhibit any symptom of the disease, but based on the recommendation of the NCDC, he will remain in isolation in order to avoid the risk of spreading the disease.

“Consequently therefore, the Governor has cancelled all his appointments with immediate effect and any inconveniences, caused are highly regretted”, the statement read.

Although the Federal Government and state governments have shutdown schools, other public institutions and major airports in the country, the measures appear to be coming late in the face of the increasing menace compared to other countries that have long shut their borders, seaports and airports.  The action of the Nigerian authorities in the belated shutting down of the airports where most of those that contracted the virus came from was said to have caused the increase in the number of confirmed cases.

he alleged late response to the scourge prompted analysts to tasked government’s ministries department and agencies to take more proactive measures to curb the pandemic.

Speaking to BusinessDay on Monday in Abuja, the Executive Director of Civil Society Legislative Advocacy Centre (CISLAC), Auwal Ibrahim Musa Rafsanjani, said the panic in Abuja is due to Nigeria’s poor record in disaster management.

He called on the Ministry of Health, The Ministry of Information and Culture and the National Orientation Agency (NOA) to intensified efforts to sensitize and educate Nigerians on the measures to curb the menace.

He also urged Nigerians not to over-dramatise the virus by creating pandemonium and panic, which he said “can even kill people more the virus”

Although he lauded the health authorities for taking measures to curb the pandemic, he lamented that Nigeria lacks the testing tube for the virus and tasked citizens to protect themselves.

“We need to take necessary measures to protect ourselves like government directed. There should not be mass gathering, we should also be cautious of our cleanliness.

“It is the responsibility of the federal government to sensitize the people. The NOA, Ministry of Health and Ministry of Information and Culture should intensify efforts to educate the people on how to get rid of this menace,” he said.