Credit Suisse Group AG Chief Executive Officer and arguably one of the most senior banker of African decent, Tidjane Thiam has been ousted in a power struggle with the chairman over a spying scandal, sending shares down 5% on doubts over the bank’s future under a new boss. 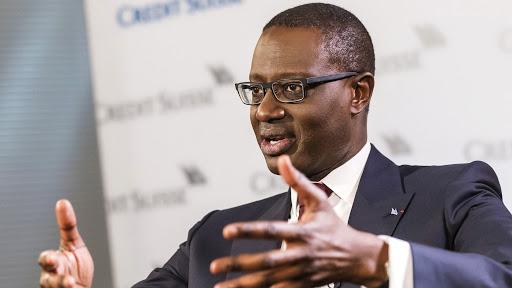 Credit Suisse Group AG Chief Executive Officer and arguably one of the most senior banker of African decent, Tidjane Thiam has been ousted in a power struggle with the chairman over a spying scandal, sending shares down 5% on doubts over the bank’s future under a new boss.

Thiam, who had the support of key shareholders after overseeing a turnaround at the lender, will be replaced by Thomas Gottstein, a 20-year veteran of the bank who leads the Swiss unit.

Born in Ivory Coast, raised in Morocco and educated in France at the elite Ecole Polytechnique, the francophone Thiam has spent a lifetime defying the odds. By his mid-20s, he was working in Paris for McKinsey & Co., the high temple of consulting. By his mid-30s, he was back in Ivory Coast — and under house arrest following a military coup. By his late-40s, he was in Britain, , as the first black chief executive of a FTSE-100 company.

Credit Suisse also said controversially that Chairman Urs Rohner has the board’s “unanimous” backing to complete his term until April 2021. Thiam will step down after presenting the Zurich-based bank’s fourth-quarter and full-year results next week, the lender said in a statement on Friday.

The decision is the culmination of a conflict between Thiam and Rohner that escalated after a recent spying scandal overshadowed the bank’s turnaround and prompted difficult questions about the culture at the top of the firm. While Thiam, 57, was cleared in an internal probe and a close lieutenant of his took the fall, the bank has struggled to move beyond the scandal after more cases surfaced.

Credit Suisse shares dropped as much as 5.1% on the news in early Zurich trading.

Top shareholders including Harris Associates, Silchester International Investors and Eminence Capital had warned the board of directors ahead of this week’s meeting that they shouldn’t take action against the CEO. Instead, they urged Rohner to back Thiam or step down himself, in an unusual public display of support for the CEO. Demands that Credit Suisse’s board ignored.

“Tidjane has made an enormous contribution to Credit Suisse since he joined us in 2015,” Rohner said in the statement. “It is to his credit that Credit Suisse is standing on a very solid foundation and has returned successfully to profit.”

For Thiam, who was born in Ivory Coast and previously held top roles at Aviva Plc and Prudential Plc before Rohner hired him in 2015, the departure blemishes a record that includes a pivot away from volatile trading and toward the more stable business of catering to affluent clients. While the shares lost about half of their value during his tenure, he won shareholder support for stabilizing the franchise.

The troubles started in September when it emerged that the bank spied on star banker Iqbal Khan after he announced he was joining crosstown rival UBS Group AG. The details that were later disclosed, including a personal falling-out between the two executives earlier that year and the suicide of a contractor, rattled business circles in Zurich, which normally enjoys a reputation for quiet professionalism.

An internal probe by the bank concluded Thiam didn’t know about the spying, and that Chief Operating Officer Pierre-Olivier Bouee was responsible. Bouee was fired late last year. It later came out that human resources chief Peter Goerke was also followed, which the bank also blamed on Bouee.

“I had no knowledge of the observation of two former colleagues,” Thiam said in the statement. “It undoubtedly disturbed Credit Suisse and caused anxiety and hurt. I regret that this happened and it should never have taken place.”

Gottstein is CEO of Credit Suisse Switzerland and has been in the banking industry for 30 years, including more than 20 at Credit Suisse. His experience includes 13 years spent in investment banking in London, as well as in private banking.

Tidjane’s resignation after prominent overseas shareholders had backed him — and called for Rohner to publicly do so — marks a victory for the Swiss establishment that closed ranks behind the chairman. A former lawyer who has been chairman of Credit Suisse for a decade, his leadership “during this turbulent time” was praised by lead independent director Severin Schwan, CEO of Swiss pharmaceuticals company Roche Holding AG.

A third spying case, involving a former Credit Suisse employee in the U.S. who claims she was followed a couple of years before, was also probed and rejected by the bank. However, lawyers for Credit Suisse still looked into the matter as recently as last week, Bloomberg reported on Tuesday.

The spying scandal underscores the risk of reputational damage to companies if their top executives are seen as running afoul of ethical standards. Barclays Plc CEO Jes Staley just survived a year-long regulatory probe into his attempts to unmask a whistle-blower, escaping with a fine in 2018.

The British lender reprimanded Staley after discovering he had twice tried to identify a whistle-blower who had raised concerns about his recruitment of a former colleague.

It’s unclear what impact Thiam’s surprise departure will have on the investigation by Swiss banking regulator Finma into the scandal. Finma said in December that it had appointed an independent auditor to investigate the case and that such probes typically take several months. No one at the regulator was immediately available on Friday morning to comment on the news.

Thiam took over at Credit Suisse in mid-2015 and quickly outlined a plan to slash costs, boost profitability and increase his firm’s financial strength. A former politician and insurance executive, he had no direct experience in investment banking, a business that became one of his biggest headaches. He was blindsided by losses at the credit unit in 2016, pushing him to accelerate cost cuts.

While the cost reductions were successful, the bank initially saw revenue fall under his watch, and the CEO had to tap investors for fresh capital. The measures started to pay off last year as earnings bucked the gloom facing other European banks and wealthy clients added new money. But by December, Thiam cut a profitability target and warned of a loss at the investment banking and capital markets business.

Nigerian Breweries doubles down on competition with new…