by Ignatius Chukwu and Ifeoma Okeke On Apr 8, 2020 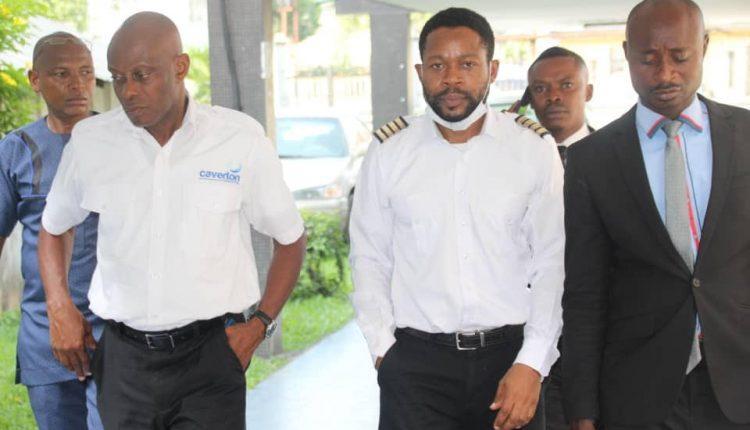 What may be the fasted prosecution after arrest in the history of Rivers State took place today Tuesday, April 7, 2020, when two pilots were arrested at noon and before evening had appeared in court and remanded in prison custody in the state capital.

This is as the Port Harcourt Chief Magistrate Court remanded two pilots of Carveton Helicopters, Samuel Ugorji and Samuel Buhari, in prison custody, for allegedly intentionally disobeying the Executive Order issued by the Rivers State Governor aimed at checking the spread of coronavirus in the state.

But Caverton Helicopters has alleged that the two pilots were unjustly detained by the Rivers State government.

The Court presided over by Chief Magistrate D.D . Ihua-Maduenyi remanded the two pilots at the Port Harcourt Correctional Centre till May 19, 2020 when their trial will commence.

Chief Magistrate Ihua-Maduenyi ruled that COVID-19 tests be carried out on the two pilots to ascertain their status.

The Pilots were arrested by the Rivers State Govt Task Force on Covid 19 for flying people into Rivers State, and arraigned via charge number: PMC/532C/2020.

Prosecution Counsel and Officer-in-charge, Legal of the Rivers State Police Command,  a Superintendent of Police, Gladys Amadi, told the court that the acts of the two pilots were capable of putting  the entire State in danger of contracting coronavirus.

She urged the court to remand them in prison custody to enable the Police conclude their investigation.  She noted that allowing the accused persons roam the streets would endanger others in the state.

According to her, remanding the pilots would also stop them from further violating the Executive Order.

The Honourable Attorney General of Rivers State, Zacheus Adango, a professor, was also in court.

The Pilots are facing a four-count charge:

Count 1: That you Samuel Ugorji (m), Samuel Buhari (m) and others now  at large as pilot and co-pilot of Twin-Otter,  Carveton Helicopters on the 7th day of April 2020 at the Air Force Base , Port Harcourt in the Port Harcourt Magisterial District,  did conspire amongst yourselves to commit misdemeanour to wit: disobedience to lawful order and thereby committed an offence under section 517A of the criminal code CAP 37, Vol 11 Laws of Rivers State of Nigeria,  1999.

Count 2: That you Samuel Ugorji (m), Samuel Buhari (m) and others now  at large on the same date and place at the aforesaid magisterial District did intentionally disobey the lawful order issued by the Governor of Rivers State as contained in paragraph 8 of the Executive Order RVSG -01 2020 made pursuant to Sections 2, 4, and 8 of Quarantine Act Cap. Q2 Laws of the Federation of Nigeria,  2004 and Regulation 11 of the Quarantine (Coronavirus (COVID-19 ) and other infectious diseases) regulations , 2020 by flying the Twin-Otter Caverton Helicopters into Air Force Base,  Port Harcourt and thereby committed an offence punishable under Section 5 of the Quarantine Act Cap Q2 LFN , 2004.

Count 3: That you Samuel Ugorji (m), Samuel Buhari (m) and others now  at large on the same date and place at the aforesaid magisterial District did conduct yourselves in a manner likely to cause  a breach of peace by flying and discharging passengers from the Twin-Otter helicopter at the Air Force Base,  Port Harcourt and thereby committed an offence punishable under Section 249 (d) of the criminal code laws of Rivers State of Nigeria, 1999.

Count 4: That you Samuel Ugorji (m), Samuel Buhari (m) and others now  at large on the same date and place at the aforesaid magisterial District did intentionally disobey the lawful order issued by the Governor of Rivers State on restriction of movement and flights within the State contrary to paragraph 8 of the Executive Order RVSG -01 2020 and thereby committed an offence punishable under Section 203 of the criminal code laws of Rivers State of Nigeria,  1999.

However, in a statement issued by Caverton, the company explained that at the start of the COVID -19 lockdown, it received a letter from its client stating that they had been given approval/ exemption to fly and continue operations, adding that  Caverton along with three other companies also received approval from the Minister of Aviation to fly only essential services, mainly in the Oil and Gas industry.

The carrier noted that they got another approval from the Nigerian Civil Aviation Authority (NCAA) to fly for this same oil and gas sector and that they had been flying along these guidelines for the past seven days.

“Today, we were informed that the Governor of Rivers State, Nyesom Wike was coming to address the operators in Port Harcourt and our people waited. But on arrival, the governor directed two of our pilots to be taken to the CID where they were told to write statements.

“Despite all pleas by our lawyers who showed all the relevant documents, they were taken to the magistrate court and charged. At the court, our lawyers also presented all the documentations approving us to fly by the federal government but the case was closed and the pilots have been remanded in Port Harcourt prison till the 19th May.

“We appeal to the federal government to urge the Rivers State government to release our pilots who violated no law and are being unduly punished for reasons we still do not understand,” Carveton stated.