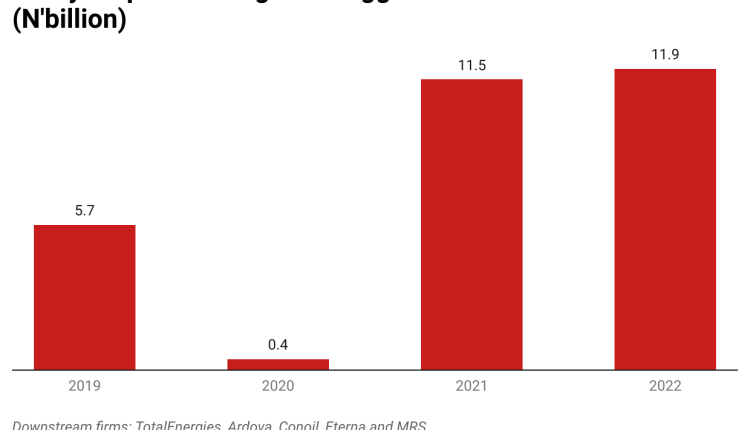 Despite the absence of full deregulation, Nigeria’s biggest downstream firms are bracing the odds to post significant upticks in both top-line and bottom-line figures. Oil companies grew combined half-year revenue to highest in four years.

The analysis of the five major downstream firms that have released their unaudited half-year financial reports shows the oil companies combined half-year profits increased to N11.9 billion from N11.4 billion in H1 2021.

The firms are TotalEnergies, Ardova, Conoil, Eterna and MRS.

“With challenges facing petrol business due to absence of full deregulation, oil and gas firms were able to design their models to leverage business opportunities in lubricant, diesel and aviation fuel business,” Ola Alokolaro, partner, energy and infrastructure at Advocaat Law Practice, said.

Analysts believe these firms are expected to sustain their resilience and deliver decent returns to investors even amid poor valuations.

“On a balance of factors, we expect both revenue and earnings growth for the majority of the downstream players. Given that international oil prices trends northward, this would translate to retail prices of deregulated petrol products staying elevated,” said analysts at Meristem Securities.

“Improved economic activities would also translate to higher volume sales, further pushing increasing turnover. This would in turn impact earnings for the period,” said the analysts.

Analysts at Afrinvest Securities in a recent report stated this as they maintained their Buy ratings on the stocks of Total Energies Marketing Nigeria Plc, Conoil Nigeria Plc, and Ardova Nigeria Plc, but Ardova posted a net loss in the first half of the year.

Compared to selected market peers (downstream) with an average P/E ratio of 14.1x, the Nigerian downstream oil companies (3.1% of total NGX equities capitalisation as of 30/06/2022) is priced at 3.5x, according to data gathered by Afrinvest Securities.

Here is an analysis to show the performance of the downstream firms in the half year of 2022. 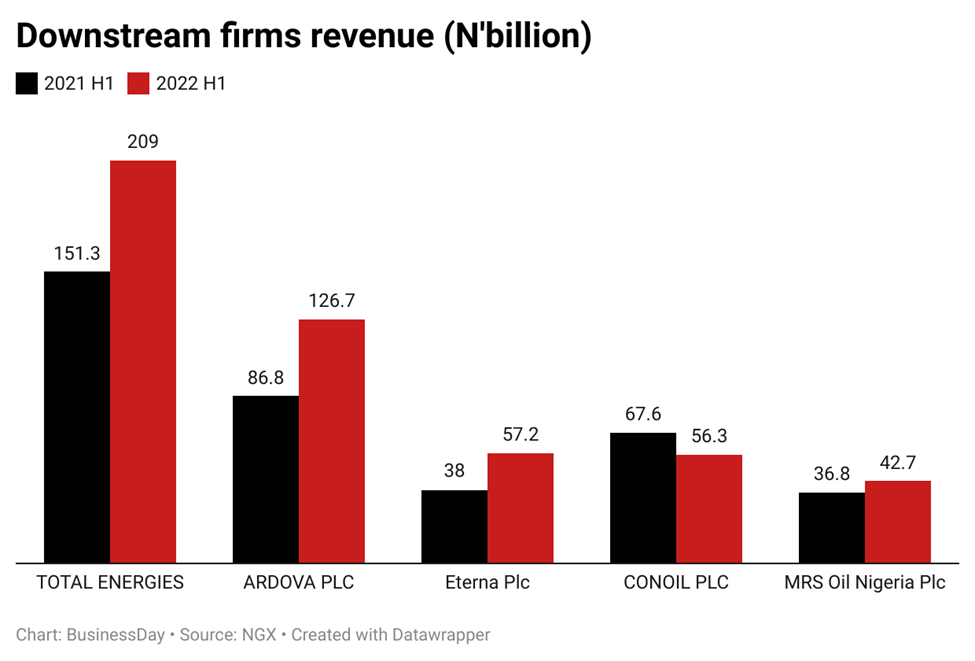 Revenue was obtained from petroleum products which amounted to N147 billion and also lubricants and others (N62 billion) in the first half of 2022.

The profit for the year grew by 8 percent to N8.5 billion from N8 billion in the first half of 2021.

Conoil’s revenue dropped by 17 percent to N56.2 billion from N67.6 billion in the first half of 2021. The downstream firm’s revenue was mainly from the sale of its petroleum products.

Total assets increased by 33 percent to N63.15 billion from N47.49 billion in the period under review.

Eterna obtained the most revenue from fuel and lubricants which amounted to N45.8 billion and N7.4 billion respectively.

Ardova’s loss in the first half of 2022 was driven by Haulage and transportation services & others and Fuels which recorded a loss of N1.54 billion and N281.4 million.