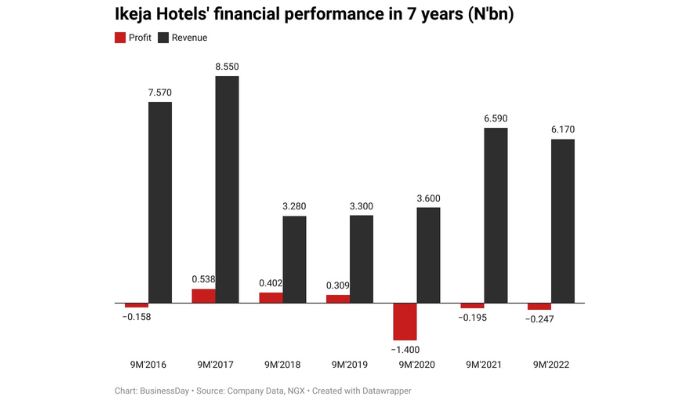 New data has shown the loss reported by Ikeja Hotels in the nine-month (9M) period that ended September 2022 dipped further by 27 percent to N247 million from N195 million in the corresponding period of 2021.

The minor operating departments’ revenue generating segment was however the main driver of the revenue dip as it was down 88 percent to N38.01 million in 9M’2022 from N325.4 million in 9M’2021.

On account of the high-interest rate environment which impacted the interest expense payable on loans, finance costs reported by the hotel jumped 11.76 percent to N808 million in the nine-month period of 2022 from N723 million in the corresponding period of 2021.

Its cash and cash equivalents increased by 72.16 percent to N7.73 billion in 9M’2022 from N4.49 billion in 9M’2021, indicating that the hotel is liquid enough to cover its short-term obligations despite reporting a loss in the period.

Net cash flow from operating activities was positive during the period, indicating that it is generating adequate cash from its core operations, however, the cash flow declined during the period by 28.81 percent to N961 million from N1.35 billion in 9M’2021.

Ikeja Hotels reported negative earnings per share of N-12 per share in the nine-month period that ended in September 2022.

Sandys retires from Guinness Nigeria board