Lekki massacre: Where are the Lagos progressives in the Buhari administration? 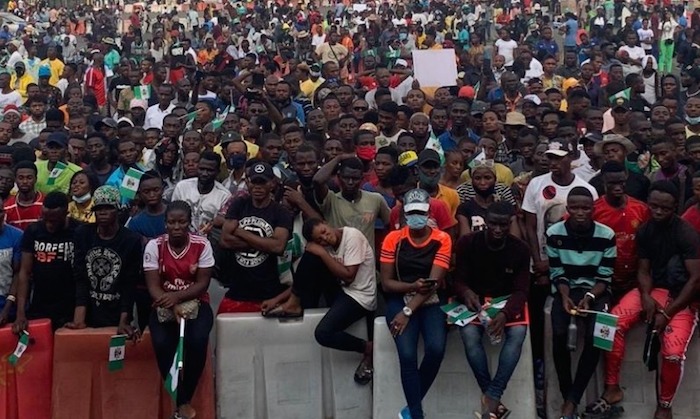 In the aftermath of the Lekki massacre and the denials by the army, some Nigerians on social media wondered whether the apparent crimes against humanity and the determination of the presidency to downplay or even ignore it will force prominent Lagos progressives in the administration– particularly Vice President Yemi Osinbajo and Infrastructure minister, Babatunde Fashola – to resign in protest.

Some even tried to point Osinbajo to former Vice President of Egypt, Mohaned ElBaradei, who resigned, in 2013, in protest over a crackdown by Egyptian security forces against the supporters of the deposed Islamic president, Mohamed Morsi, which led to the killing of hundreds of people. In his resignation letter, ElBaradei, also a Nobel laureate, restated his belief in “peaceful ways to end [the] clash in society” and that by ignoring the peaceful means and resorting to brutal crackdowns, he felt, as he stated, “it has become difficult for me to continue bearing responsibility for decisions that I do not agree with and whose consequences I fear.” He ultimately threw in the towel because he “cannot bear the responsibility for one drop of blood”.

How have our own star boys, who are renowned legal luminaries in their own rights, reacted to the war crimes and massacre of peaceful civilian protesters ordered by their own administration? You can bet. While Fashola resorted to theatrical performance (discovering a camera at the scene of the killings days after it has been thoroughly cleaned), Vice President Osinbajo, a professor of law and reverend gentleman to boot, has been unusually quiet, tweeting the customary “my heart goes out” to all victims and promising “justice”.

But we know there will be no justice. The government, which ordered the massacre, cannot and will not indict itself. No one is going to lose his job or be reprimanded, not to talk about being tried for the killing of innocent protesters. Why do I say this? Because Nigeria and particularly, this administration has a rich history of massacres and extrajudicial killings of peaceful protesters and agitators and no one has yet been held accountable. Neither will the setting up of judicial panels across the states lead to justice. We’ve been here before.

On December 12 2015 the army massacred over 347 members of the Islamic Movement of Nigeria (IMN) who allegedly blocked the convoy of the Chief of Army Staff, Lt.-Gen. Tukur Buratai and later proceeded to destroy the sect’s headquarters, kill as many of its members there and arrested the sect’s leader and his wife (they are still being illegally detained). The Kaduna state government set up a panel to investigate the killings. The panel indicted the Nigerian army for the Zaria massacre.

Specifically, it indicted Maj. General Adeniyi Oyebade, the General Officer Commanding the Nigerian Army’s 1st Division in Kaduna for authorising the operation. The panel stopped short of indicting the Chief of Army Staff General Burutai who also bears responsibility for, and has defended, the killings on several occasions.

Despite the indictments, Oyebade was rewarded with an appointment as the 28th Commandant of the Nigerian Defence Academy in 2017 and retired with full honours after 35 years of service in 2019. Of course, Burutai is still the imperious chief of the army even when he continues to flounder and mismanage the war against the Boko Haram insurgency. Interestingly, the only people being prosecuted and persecuted by the Kaduna state government are the victims of the killing.

Besides, our star boys never uttered any word or protested when Shiites were being executed on the streets from 2015 – 2017. They were quiet when unarmed Indigenous People of Biafra (IPOB) were being massacred on the streets. They conveniently looked the other way as the people of Gbaramatu kingdom were being killed for purportedly harbouring Tompolo. Why would anyone think they will now find their voice and revulsion against the killings of peaceful and unarmed protesters just because they are of the middle class and it happened in Lagos?

Truth is, our star boys are captives of their political and sectional ambitions. In 2015, these so-called progressives campaigned in the Southwest on a change ticket promising to transform the country and most especially, align the region with the centre to improve the fortunes of the region.

In 2019, when the failures of the administration and the deep dissatisfaction of the people could not be disguised or hushed over, all pretences to policy appeals were abandoned and our star boys became ethnic champions, reminding their fellow Yorubas that it will be their turn in 2023 to rule but only if they vote for Buhari again in 2019. During the campaigns, Osinbajo was at the palace of the Alaafin of Oyo and was quoted as saying:

Similarly Fashola, at a town hall meeting in October 2018 and speaking in Yoruba, said:

“Did you know that power is rotating to the South-West after the completion of Buhari’s tenure if you vote for him in 2019?” spicing it up with a beautiful Yoruba proverb, he continued:

“Your child cannot surrender her waist for edifying beads and you will use the bead to decorate another child’s waist.”

A vote for Buhari in 2019 means a return of power to the South West in 2023. I am sure you will vote wisely,” he counselled.

It may hurt to know, but truth remains the star boys of Lagos have deadened their consciences. They have conveniently hidden their disgust. They have tolerated Buhari for close to six years and will not now back out when the time to achieve their ultimate goal is approaching. They will bet on the short memory of Nigerians and the appeal of ethnic politics to rally the southwest to their course in 2023.