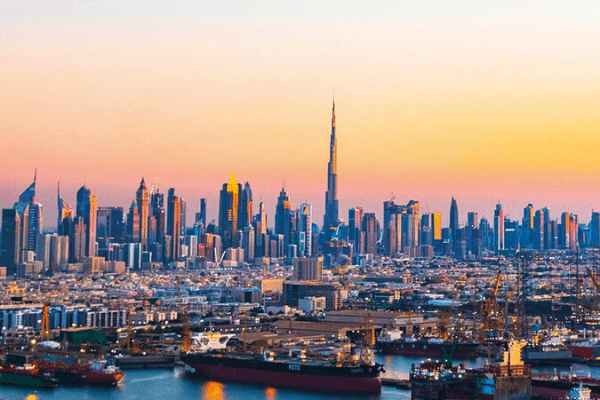 The recent spending spree of Davido and some of our celebrities including the politicians and other fun-seeking people around the world in Dubai, a city in the United Arab Emirate (UAE) is part of the reward for the vision of Sheikh Mohammed.

Dubai is the most populous city of the United Arab Emirate, an emirate among the emirates having 3.32million people out of the total 9.89million living in the United Emirates. Dubai, now an adult Disney land was once a “Creditopolis”, a city built entirely on debt. Though Oil revenue helped to pay off the debt and accelerate the development of the city, Dubai current revenue profile showed Oil accounting for less than 5 percent and increasing income from trade, tourism, aviation, real estate and financial services. What a change! This is a mercurial diversification of the fortunes and image of once a low valued desert and port to a city built on a desert and now the centre of attention for people around the globe with colossal revenue.

I have always argued that religion is not the main problem of Nigeria, except when used as a potent tool for political advantage. I will elucidate my assertion soon.

Let’s take Kano, a metropolitan city in Nigeria as a representation of cities in the most populous Africa nation. Of course, Dubai, as a city and Kano as another city, is representing two cities with different tales. You can call this a tale of two cities as we look for the difference in the development, economic status, relevance of Kano, Nigeria and Dubai, UAE. By the hotness of the weather, let’s name Kano as a desert to give a balance- an equal starting equilibrium. With a population of over 9million people and with 5.5million registered voters, the city of Kano was created in 1805. It is a metropolitan city with four addition emirates which recently reduces the influence of the Kano Emirate. Kano is a powerful state in Nigeria when it comes to voting and deciding who will win the presidential election in Nigeria. The count of votes from Kano can change the election’s outcome. The state is also known to have a penchant for underage voters and prone to political violence.

Kano and Dubai are two different cites with some similar characteristics and the wide disparity in the development and fortunes for the residents and visitors.

The people of the two cities are predominantly Muslims, they both read the Quran and practice Islam. Kano is ahead if religion and prayers are the significant factors for development. We have a Christian population who read the Bible in Kano, and the added faith of the two dominant religions should make Kano, a more prosperous city than Dubai. With this, the gap between the two cities is not religion. If it is religion, Kano should be better than Dubai. It is not also resources-both natural and human capital. Nigeria is equally blessed with oil and more natural resources than the UAE.

It is high time we started to have new energies and perspectives of what we want a united Nigeria to be. We will have been better than a desert if our priorities have not been on where the president comes from or which region is destined to rule others

Whereas Dubai was led by a visionary Sheikh Mohammed, who envisaged the vicissitudes of the city. Kano, on the other hand, focused on gaining political and religious relevance ahead of development. The mind-set represented by Kano focused of giving the traditional institutions the taxpayers’ money to preserve it until recently when the government deemed it fit to decentralise the power of the prominent emirate by splitting the kingdom into four other equal entities.

Kano is no doubt powerful from her investment in politics. The underage voters are helping the political elites but hardly the impoverished masses, and the city was at a time volatile for violence and killings despite its cosmopolitan nature. Many people are living below the poverty line, with few in government and in the traditional robes living lives of affluence with many wives and children to show as the dividend of city’s focus and leadership. There is close no or zero income from tourism, and economic prosperity if compared with Dubai.

What’s the difference in my Kano- Nigeria and their Dubai- the UAE? Why are Nigerians with spare money unwilling to lodge in Kano hotels or shop in the Dawano, Galadima or the Kurumi market where native attires could be gotten at the cheapest prices?

We cannot blame or prevent people from enjoying what life has to offer. It is not unpatriotic to visit Dubai and spend lavishly to enjoy oneself and help a city whose vision and leadership is alive. I am sure there will be no border closure on trips to Dubai to develop our Kano whose objectives over the years was premised on religious supremacy and political power.

It is high time we started to have new energies and perspectives of what we want a united Nigeria to be. We will have been better than a desert if our priorities have not been on where the president comes from or which region is destined to rule others. Unfortunately, no one religion or region has benefitted from the religious and ethnic-oriented leadership we have adopted. The area with more years at the corridor of power is equally with the highest poor and uneducated citizens who are now bandits, with the split effect of kidnapping, Boko Harams, yahoo boys, and children trafficking.

Rather than been obsessed with where the power goes or reside, the Nigerian leaders should see leadership as a service and stop the tolerance of corruption, mediocrity and ineptitude of elected officers at the detriment of the people who are becoming less tolerant to living without hope. Let’s see Nigeria as a giant with opportunity and start afresh to build “Dubai’s” out of our cities and communities to retain the giant name in Africa and change the dwarf nature in terms of output as it is now.

We can change! We have many Sheikh Mohammed’s’ among us only if our political structure, visionary deficiency, paranoid religious and ethnical superiority mindset is relinquished for true nationalism where all Nigerians can prosper irrespective of religion, ethnic and place of origin. We need a new national identity and life to reiterate hope for the hopeless masses.

Dubai was not born as the Dubai we know today. It was taken out of hard work and vision, without which no desert can be transformed into one of the best tourists’ centres in the world.