Fight for a free press in Nigeria, it’s the bulwark against bad government 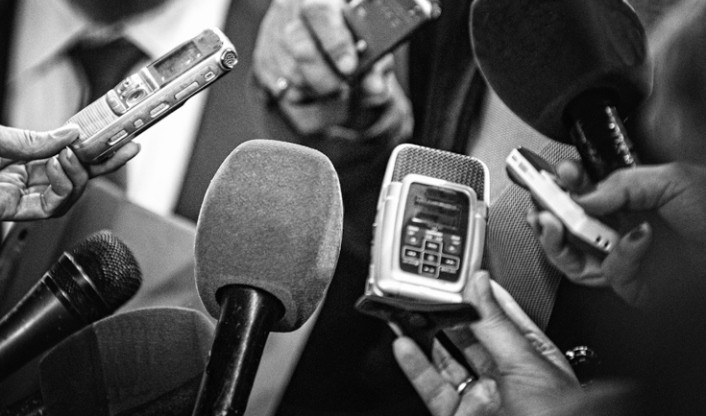 Recently, in an unprecedented protest, Nigerian newspapers jointly published the same front page, with a bold headline: “Information Blackout”. They were campaigning against two legislative bills that, if passed into law, would significantly undermine media freedom in Nigeria. To drive the message home, most of the newspapers also published front-page editorials, strongly condemning and opposing the proposed laws.

What are these proposed laws? Well, they are two bills sponsored by Olusegun Odebunmi, a member of the House of Representatives, who is also chairman of the House Committee on Information, National Orientation, Ethics and Values. You wouldn’t expect a parliamentary committee, whose name includes such noble words as “information”, “ethics” and “values” to attempt to produce draconian laws that would undermine those concepts. Would you?

Yet, that’s what the two bills would do if they became law. One bill aims to amend the National Broadcasting Commission, NBC, Act; the other the Nigerian Press Council, NPC, Act. But although the bills purportedly aim to strengthen, respectively, the NBC and the NPC, in reality, they would destroy press freedom in Nigeria.

For instance, the Nigerian Press Council Amendment Bill would give the president a free rein to appoint the NPC’s board, including its chairman, without the Senate’s approval. That would allow him to fill the board with government poodles. The Bill would also make the information minister an omnipotent media czar; vesting him with unrestrained powers to control the media, including powers to approve the establishment, ownership and operation of newspapers. Also, to create a National Press Code to guide the conduct of the media; and to impose punitive measures, including revocation of licence, on any media house deemed to have breached the code. Journalists can be fined, jailed and deregistered!

Initially, I was bemused by the newspapers’ concerted and high-profile campaign, jointly sponsored by the Nigerian Union of Journalists (NUJ), the Nigerian Guild of Editors (NGE) and the Newspaper Proprietors’ Association of Nigeria (NPAN). After all, I thought, these are just private member’s bills, which, in other climes, would have no traction unless they enjoyed consensus in the legislature and supported by the government. But, then, the government’s equivocation and duplicitousness gave the game away.

Sadly, Nigeria’s government is not only secretive and abusive, but also doing everything to entrench its secrecy and the lack of accountability for its maladministration

When asked, the Presidency denied having a hand in the bills. Femi Adesina, President Buhari’s senior media adviser, said: “That’s not strictly a Presidency thing because the President has nothing to do with that”, adding: “It’s a government thing and it’s the Minister (of Information) that can talk about it.” But the Minister of Information, Lai Mohammed, said the Federal Government was not behind the bills, stressing that they were private member’s bills. However, he said he made “contributions” to the bills and wondered why the media wouldn’t do so instead of trying to stop the bills!

But wait a minute! Why would the media engage with bills that, at their heart, aim to stifle the press and criminalise journalists for doing their job? Why would they cooperate with proposed laws that, even as a concept, are irredeemably bad? What’s there to improve?

Surely, it’s the government that should show its hand. Instead of equivocating and feigning detachment, the Presidency should say whether President Buhari supports the draconian media bills and would sign them into law if passed by the National Assembly. Nigerians certainly deserve to know whether their president supports bills that would destroy media freedom in Nigeria. So, why doesn’t the Presidency out rightly reject the patently obnoxious media bills? And why is Lai Mohammed making “contributions” to such bills?

Well, the answer seems obvious. President Buhari’s government fully supports the bills’ aims. It is only hiding behind the private member’s bills and using Odebunmi to do the dirty work. Clearly, the Federal Government has motives. Think of it: Who would benefit from the bills if they became law?

First, the president: he could appoint, unrestrained, whomever he likes to the NPC board. I mean, can you expect a president who nominated Lauretta Onochie, his ultra-partisan aide, as INEC Commissioner, to respect the independence and neutrality of either the NBC or the NPC? President Buhari might even appoint Onochie to the board of the NPC as a revenge on the press, which vehemently opposed her nomination!

The second beneficiary would be the information minister, who would run the NPC and NBC as appendages of his ministry and would have enormous powers to turn the media into government mouthpieces, thus denying the citizens their rights to know and be heard, as the newspapers said in their joint front-page protest.

But that’s not what good journalism is about. As the Financial Times rightly put it: “Good journalism, and by extension society, relies on leaks that expose abuses of power”. All over the world, governments want to keep their shady deeds secret and hide their skeletons in the closet. But a free press is a threat to government secrecy and abuses of power. Sadly, Nigeria’s government is not only secretive and abusive, but also doing everything to entrench its secrecy and the lack of accountability for its maladministration.

For instance, recently, the Presidency swore its staff to an oath of secrecy. Tijjani Umar, State House permanent secretary, said that unauthorised disclosure of classified information was a grievous offence. All civilised nations have Official Secrets Acts and Civil Service Codes, and the courts are there to adjudicate on alleged breaches of official secrets acts. But subjecting employees to a judge-administered oath of secrecy? That’s overreaching, authoritarian, an abuse of power! It was disappointing that Justice Hamzat Muazu of the Federal Capital Territory (FCT) High Court agreed to be part of that process, when the courts should be watering down the absoluteness of official secrets acts.

Of course, no one should leak or disseminate sensitive government information that could endanger national security; no one should be part of hostile state espionage. But sensible official secrets laws allow for a public interest defence to protect sources, whistle-blowers and journalists who leak unauthorised information that’s patently in the public interest, such as corruption, scandals or gross misconduct. As Martin Bright, Acting Editor of Index on Censorship, rightly puts it: “Legislation that allows for no public interest defence has no place in a modern democracy”.

Sadly, despite the existence of a Freedom of Information Act, despite the purported encouragement of whistle-blowing to fight corruption, the Nigerian government is utterly intolerant of robust investigative journalism, or of public interest journalism. Rather, the government wants to muzzle sources, whistle-blowers and journalists acting in the public interest. A few years ago, I attended an event at the Law Society in London on the treatment of journalists worldwide, I was sad, if not surprised, that Nigeria was at the top of the list of countries where it is dangerous to be an investigative and bold journalist.

The strapline of the Financial Times is “Without fear and without favour”. That’s good journalism: the ability to report the facts without fear or favour. But, thanks to political and commercial pressures, newspapers in Nigeria are forced to exercise self-censorship. Sadly, the Presidency’s oath of secrecy and Odebunmi’s government-backed “private member’s bills”, if they became law, would make the situation worse; they will destroy media freedom and public interest journalism, the lifeblood of any genuine democracy.

Recently, in response to the UK Government’s proposed amendment to the Official Secrets Act, which British media fear might undermine investigative journalism, the Financial Times wrote: “The fourth estate must be free from threat of prosecution simply for doing its job. That includes holding the government to account”.