The third part of this investigation uncovers how regulatory failure allowed lead acid battery recyclers without even the requisite government approvals to operate with reckless abandon and endanger the lives of many Nigerians, write Isaac Anyaogu and Petra Sorge.

The third part of this investigation uncovers how regulatory failure allowed lead acid battery recyclers without even the requisite government approvals to operate with reckless abandon and endanger the lives of many Nigerians, writes Isaac Anyaogu and Petra Sorge .

Confronted with test results showing high levels of lead in the blood of people living close to its lead battery recycling operation in Ipetoro, Sagamu, local government area of Ogun State, Everest Metals Nigeria Ltd’s first line of defence was that it had all the government registrations required for the business. 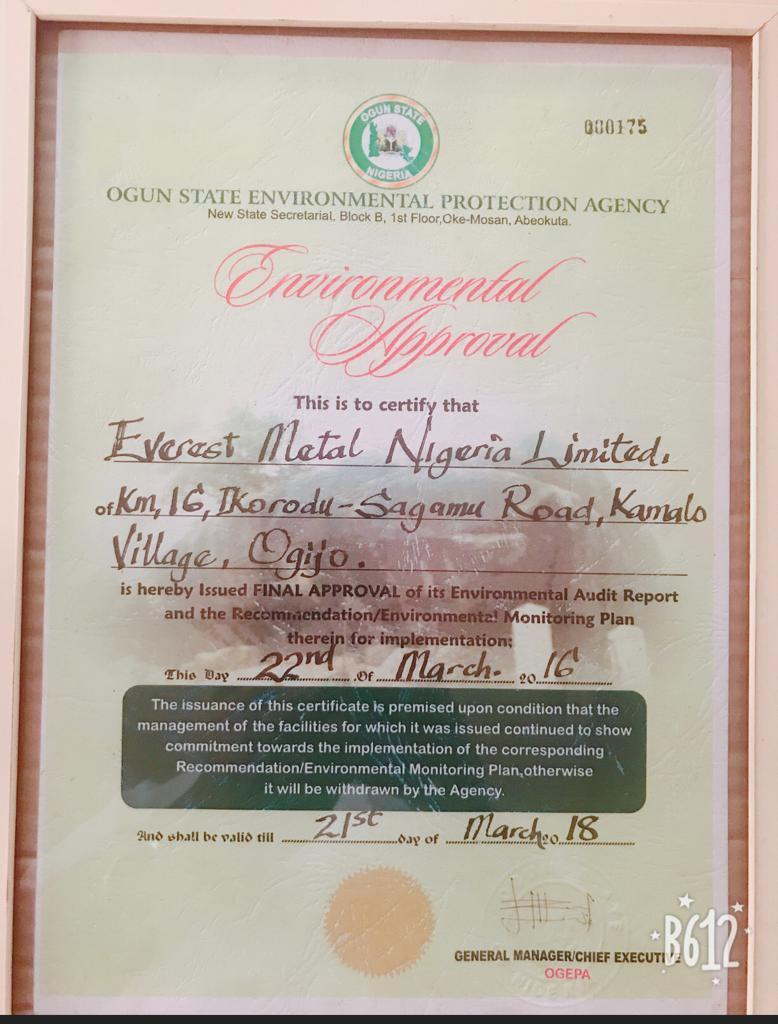 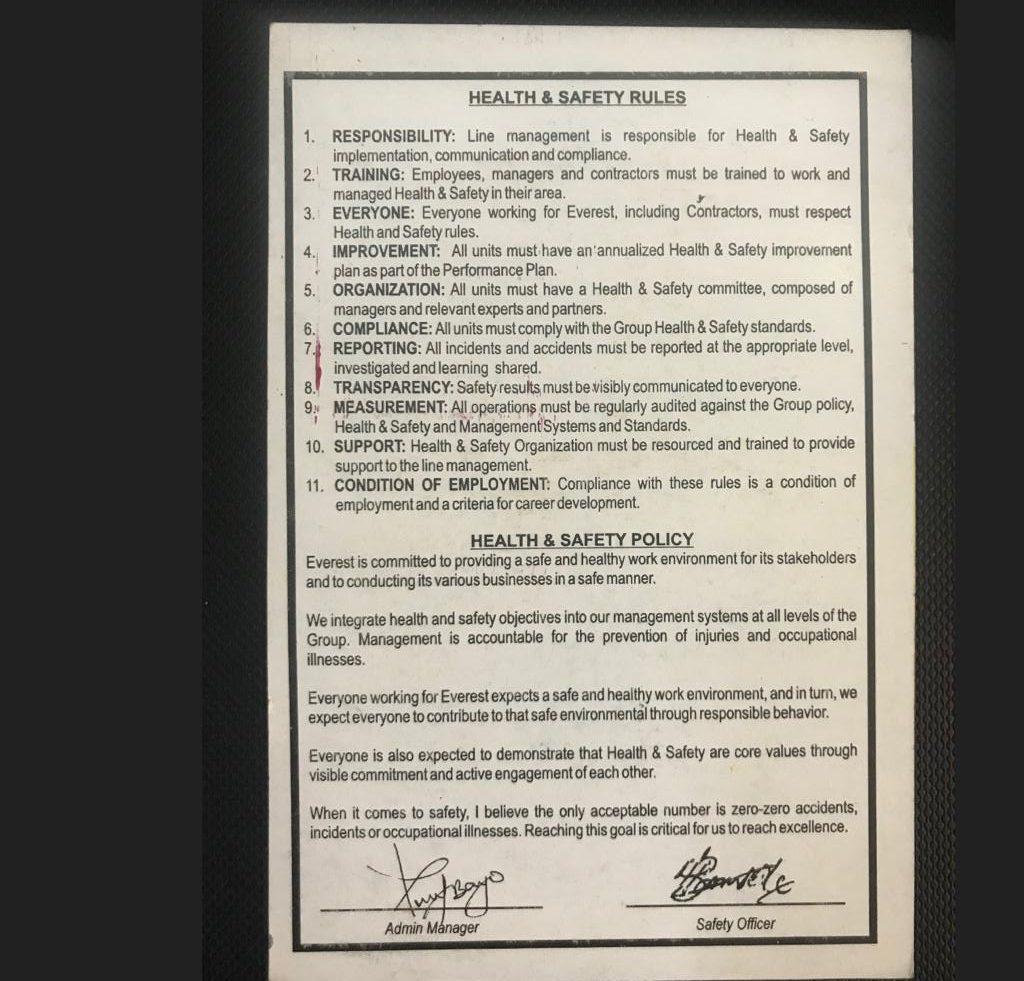 This is not true.

Therefore to be eligible to move hazardous waste, of which used lead acid batteries (ulabs) are part of, the Ministry of Environment issues a company dealing with hazardous waste a certificate to export the waste material. Without this certificate, when a container carrying waste material arrives in a different country, it is seized and returned to the country of origin.

So to ascertain the company’s claim of having the right registrations, we visited the Ministry of the Environment in Abuja and secured a list of approved lead battery recyclers permitted to export lead recycled locally and found that it does not incude Everest Metals Nigeria Ltd.

However, a source inside the ministry informed us that the company’s registration was withdrawn after a non-profit, Sustainable Research And Action For Environmental Development (SRADEV) published a study last year, indicating high levels of lead in the soil samples taken from the company’s facility.

One senior official of the ministry confirmed that Everest Metals Recycling was operating illegally because they have not been awarded clearance to export hazardous waste.

The ministry of environment is yet to respond to requests for comments at the time of publication.

Yet Everest Metal was issued an export license by the Nigerian Export Promotion Council (NEPC) for the same waste it did not secure approval to export by the Ministry of Environment. Vikas Das, managing director of Everest Metals presented an exporter registration certificate issued by the NEPC (REF. NO 0003356) valid till 16/02/2020 raising questions about coordination and synergy in the ministries.

The NEPC has not responded to questions on the process that led to awarding Everest Metals an export license as at the time of publication.

‘We will do something about it’

Environmental monitoring falls under the jurisdiction of the ministry of environment through the Ogun state environmental Protection Agency (OGEPA). We sought the opinion of Bolaji Oyeleye, the state commissioner of environment on how the company could be allowed to carry on with its dangerous activities in the state.

“We have had problems with those companies in that community in the past, but it is something we are looking into. We will definitely do something about it.” Oyeleye said by phone.

However, civil servants who didn’t want to be named confirmed that the ministry is seeking to balance attracting investments and protecting the people’s health. It is not difficult to see that business clearly is winning.

“It is clear the community is seriously polluted, this should call for an emergency,” said Leslie Adogame, executive director of SRADEV. “What needs to be done is to carry out remedial activities on the land and move everyone out.”

However, Vikas Das, the managing director of Everest Metals Ltd presented an environmental approval issued by the Ogun State Environmental Protection Agency (OGEPA) as evidence that it was complying with the state’s laws. The only problem is, it expired in March this year.

Enquiries at OGEPA showed that when the company was being established, it was compelled to install facilities that will mitigate the consequences from its activities. According to the statutes setting up the agency, it has to serve series of notices before it can seal up a defaulting company.

Funmilayo Kuti, the general manager of OGEPA when contacted requested for a letter before she can issue a response. This was sent to her through her email, but she did not respond until publication date, almost one week later, through her press officer.

“She wants you to come to her office and submit it physically,” Kemi Oyeleye, the press officer said on the phone.

It was understandable why the community leaders said they made representations to the National Environmental Standards and Regulations Enforcement Agency, (NESREA) office in Ibadan. The officials merely visited the community and went into the company and nothing has since been done.

Since state officials were not permitted to speak on record to the press, we visited NESREA office in Abuja to meet with the director general. But on the agreed date, he was summoned by the national assembly and the meeting could not hold. However, the result of this investigation was shared with a senior director of the agency.

The response mirrors the same remarks made by the director general Lawrence Anukam, when I interviewed him in his office in February last year on a related story about hazardous artisanal lead acid battery recycling. He mentioned poor funding to effectively monitor the state and inability of operators to operationalize and Extended Producer Responsibility (EPR)

The Federal Government has developed a National Environmental Regulations with provision for the EPR. The EPR shifts the responsibility for waste management from government to private industry, obligating producers, importers and/or sellers to internalise waste management costs in their product prices and ensure safe handling of their products.

The battery producer is tasked with monitoring of their products from cradle to cradle and administers recovery and recycling programmes through the PRO.  On the other hand, the government would monitor compliance, ban designated hazardous materials from use in products and/or disposal, establish relevant environmental standards, register and accredit recyclers as Authorised Treatment Facilities (ATF), and issue permits.

NESREA has developed operational guidelines that explore the use of economic instrument to ramp up compliance but enforcement as regards ULABs has not received the attention it required leading to the pollution in Ipetoro.

Over a year after, Anukam, said sector players have now nominated a PRO and would soon operationalize the EPR, operators are yet to fully agree on the modalities for setting up the organisation.

“In the past, environmental crimes attract paltry fines and levies, with the amendment, the courts are now at liberty to impose stiffer fines that are commensurate to the gravity of the crime committed,” says a statement by Oyofo Sule, deputy director of information of NESREA.

So it seems the only thing holding back the agency now is money to buy petrol for their cars.

Following the publication of this story, the German government and European Union have placed restrictions on importation of lead from Nigeria. The Federal Ministry of Environment has been mandated by the European Union to improve monitoring of local lead acid battery recyclers.

Meanwhile, Everest Metals Nigeria Ltd has moved its battery storage further away from the community and blocked the path through which liquid lead wastes seeps into the community. It has engaged environmental consultants for advice and has carried out an environmental audit of the company’s processes. It is also carrying out social responsibility activities grading the roads and now trying to bring power into the community and setting up a local medical center.

Meanwhile, high level engagement with the Federal Ministry of Environment has led to the amendment of the NESREA Act and monitoring of the operations of battery recycling companies in Nigeria has intensified.

This investigation was supported by the European Centre for Journalism and the Bill and Melinda Gates Foundation. Petra Sorge, freelance journalist from Germany assisted with the research for the story.

Dying in instalments: How lead battery recyclers are poisoning Nigerians (Part I)

Dying in instalments: How lead battery recyclers are…