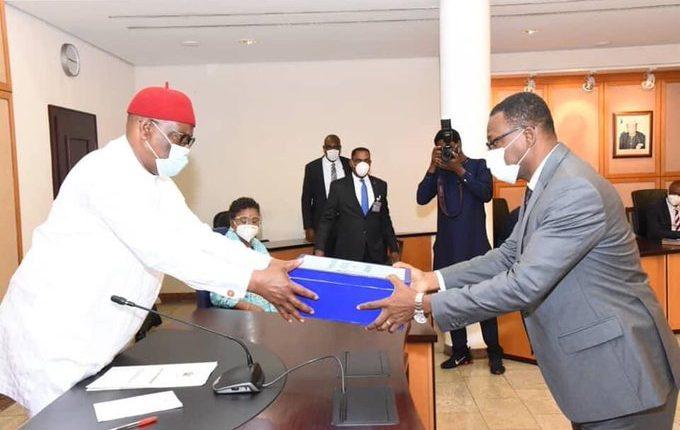 What seemed a highlight of the revised budget could be the retaining of the Rivers State House of Assembly quarters and no-salary-cut decision for political appointees in the state on a day 30 exotic jeeps were handed to judges in the state.

The signing followed the presentation of the budget by the majority leader of the House, Martin Amaewhule, in government house in Port Harcourt.

The new budget is a 48 percent reduction from the N530.81 billion (N530,813,357,619) originally budgeted for spending. Gov Wike said the unfortunate effect of the COVID-19 pandemic, particularly in Nigeria, necessitated the review.

The implication of the review of the budget, according to the governor, is that budgetary allocations including capital and recurrent expenditures have been reduced. However, this, he said, will not affect the delivery of quality developmental projects and services to Rivers people.

The governor is constructing three flyovers at N21Bn and recently awarded a third with two link roads at N18Bn. The state recently got N78.9Bn windfall as a refund for federal road projected executed in the state in the past. Many citizens have suggested what projects to be targeted by the windfall but the governor has so far remained silent.

Signing the revised appropriation law, Gov Wike stated: “It is most unfortunate that everybody is living a different life now because of the pandemic, which calls for us to face the economic reality. COVID-19 has affected economic activities and revenues of government, and so it became necessary to review our budget.

“By the revised budget, it means that so many things have to change. We have cut down the capital and recurrent expenditure to face reality.

“A good living environment and quality houses will enhance your input and services to our State,” he stated. The governor promised to release the balance of funds for the 2018 constituency projects of the legislators.

Also speaking, the Majority Leader of the House, Martin Amaewhule, said the Rivers State revised Appropriation Law No. 7 of 2020 is intended to make provision of services to fall into current reality.

“Against the approved figures of the sum of N530.81Bn which the House approved in 2019, as a result of the prevailing economic circumstances of the country, the House now approved a total sum of N171.33Bn for capital expenditure. For the recurrent expenditure, N129.37Bn bringing a total of N300.37Bn,” he added.

In his remarks, Speaker of the House, Ikuinyi-Owaji Ibani, noted that Gov Wike has conscientiously implemented policies and programmes to benefit Rivers people.

He said the revised budget and revised medium-term expenditure framework stipulate actions of government to better the fortunes of the state and establish an enduring legacy for posterity.

MTN, 9Mobile are building chatbots: Why it matters