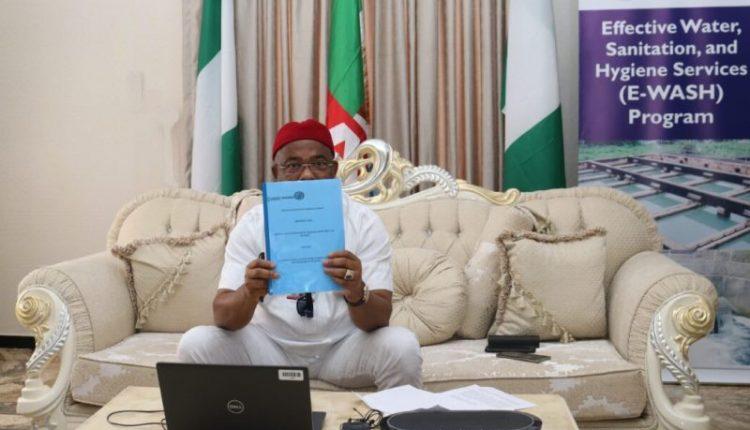 At the Imo State Executive Council Chambers, government house, Owerri, the Governor said  the “revised 2020 Imo State budget of rehabilitation, reconstruction, and recovery heralds a fresh page, with great promise in the fiscal history of our great State, Imo.”

He informed that it was the first conscious step of the shared prosperity government to begin the implementation of a fiscal road map that would guarantee economic liberation for the people of Imo State.

“A new dawn, a new day and a great new beginning,” he said, and enjoined the prosperity team to be “proud of the glorious new day which comes with its attendant responsibilities and challenges.”

He expressed the State gratitude to the Speaker, Chiji Collins, and the entire members of Imo State House of Assembly for their prompt and diligent attendance to duty and sacrifice in ensuring that the 2020 revised budget was passed into law on time.

Uzodimma gave an insight into the reasons for the revised budget, saying it was predicated on two reasons: the downward oil prices that have made the original budget unattainable and the revised National Medium Term Expenditure Framework (NMTEF) which is an agreement between Nigeria and the World Bank to help fund the shortfalls arising from the impact of the COVID-19 pandemic through its SFTAFS (State Fiscal Transparency Accountability For Sustainability) Programme.

He said for State to benefit from SFTAFS there is a lot of conditionalities attached to it which include but not limited to revised budget where COVID-19 related expenses must be at least 10 percent of the total budget. According to him, such conditions and more are all captured in the revised 2020 Imo State approved budget.

In addition, the Governor informed that the State had commissioned the online publication of the citizens’ budget and first quarter 2020 report on-budget performance.

He said it was in line with his promise to Imo people to run transparent people-oriented governance and that he was glad that with the above, Imo State is now qualified to receive the sum of $300,000 (USD) and $1 million (USD) respectively from the World Bank, as an encouragement for running an open, transparent government.

The informed also of his administration’s efforts towards mitigating the negative effects of COVID-19 on Imo people to include: granting of a number of tax relief and waivers on personal income tax, consumer tax, PAYE for private schools and levies for tricycles and motorcycle operators.

He reassured that from provisions of the revised approved 2020 budget the 3Rs agenda anchored on shared prosperity will go a long way in alleviating the hardships experienced by Imo People as a result of COVID-19 pandemic.

On further clarifications on why the budget was revised downwards, the Speaker Imo State House of Assembly, Chiji Collins said that it was as a result of the prevailing circumstances all over the world today, especially the nose-dive in the prices of oil at the international market which has brought undue pressures on foreign earnings and consequent reductions in federal allocations to states and local governments, and Imo State is not an exception.

Chiji emphasized that the budget was brought down to make sure that it accommodated the deliverables of the present situation anchored on the true economic realities.

The Speaker reassured Imo people that the bill signed as the law went through all the legal processes of the House of Assembly before it was passed as a law and thanked Governor Uzodimma for promptly assenting to the revised 2020 Imo budget.

The sectoral approvals that came from the House of Assembly reduced the recurrent expenditure by 30.7 percent, capital expenditure revised downwards from N106.28 billion to N44.96 billion. The economic sector was 7.7 percent reduction, social services revised to N7.19 billion representing a 66 percent decrease. Also, the general administration lost 25.5 percent as a result of the revised budget, while N1.15 billion is made available for the COVID-19 pandemic in the general administration sector of the budget.