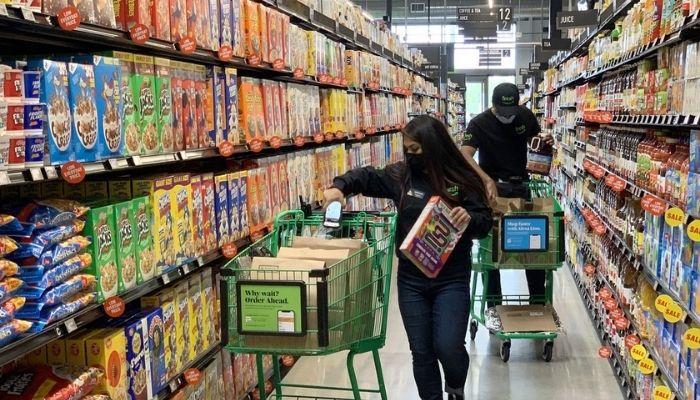 With the depreciation of the naira amid the scarcity of foreign exchange making imported products more expensive, supermarkets in the country are increasingly switching to local products.

“This trend will also be supported by campaigns that seek to raise awareness and call for supermarkets to support products that are ‘Made in Nigeria’, as well as putting pressure on the government to reduce the reliance on imports for essential goods,” it said.

Uchenna Uzo, a faculty director at the Lagos Business School, said with the high inflation and exchange rate, people are looking for alternatives now in the retail space.

On the benefits of embracing locally manufactured goods, Uzo said it helps to manage prices easily, control the type of products that come in and out of the store, give feedback on the products so that they can be remodified and open up business opportunities for the producers.

“Local production is one of the things that is making South Africa thrive in retail,” he said.

Industry experts say Africa’s most populous nation can learn from South Africa, whose dependence on local produce makes it a leader in the supermarket chain.

“Including and developing SMEs in the supply chain allows us to grow and diversify by providing various options and a continuous supply pipeline for products and services,” retail giant Shoprite said on its website.

Since the outbreak of the pandemic, Nigeria, which depends largely on crude oil proceeds, has been grappling with weak foreign inflows, resulting in a liquidity challenge in the country’s FX market.

In 2020, the Central Bank of Nigeria (CBN) devalued the naira twice from 306/$ to 361/$ and 379/$, weakening the value of the naira against the dollar. Last year, the CBN also officially adopted the Nigerian Autonomous Foreign Exchange Rate as its official rate.

This year, the Russia-Ukraine crisis has worsened the country’s FX challenges. As of July 28, the exchange rate of the naira to the US dollar was N431/$1 at the official market and N710/$1 at the parallel market.

The high cost of FX is also contributing to the country’s inflation rate, which has surged to a five-year high. According to the National Bureau of Statistics (NBS), it rose to 18.60 percent in June 2022 from 17.71 in the previous month.

“While the impact on consumers has been well documented, it is also important that we don’t lose sight of how it is affecting neighbourhood retailers who make a living from selling food items and other products across the country,” said Chidi Akubuiro, managing director at TradeDepot.

“For some products, we have seen more than 60 percent increases in prices in the last 12 months. On average, the price of products in our food category (dominated by noodles and pasta products) has increased by 27 percent,” Akubuiro said.

He said the significant increases added to the pressure on store owners to not only stock products that will sell but to make sure they are getting the best possible prices for these products.

“Even if store owners are certain that consumers will buy, rising prices mean they are likely to reduce their basket sizes, which in turn reduces their profits,” he added.

According to the NBS, the value of the country’s imports increased by 63.8 percent to N20.8 trillion in 2021, the highest on record, from N12.7 trillion in the previous year.

A recent retail report by Boston Consulting Group said due to structural problems in Nigeria such as currency devaluation, inefficient transportation, infrastructure, poor logistics capabilities, inadequate electrical power, and other complex challenges, foreign investors are likely to remain hesitant about entering the market.

“Unless there is massive investment by local companies and progress in removing structural barriers, the development of modern retail formats will remain significantly below their potential,” it said.

BusinessDay had earlier reported that Nigerian manufacturers were now increasingly sourcing more inputs within the economy than from abroad to beat FX scarcity.

Samuel Sewonike, head of operations at Answer Industries Limited, told BusinessDay that since the pandemic outbreak, patronage from manufacturers had been on the rise owing to FX scarcity. “We now have these manufacturers patronising us.”