Economists have painted another unsavoury picture of the Nigerian economy and their prognosis isolates six factors that are piling woes on already beleaguered businesses and households, according to a report analysed by BusinessDay.

Firstly, they said Africa’s largest economy, which is yet to recover from the destruction caused by two economic contractions in five years, will face more slowdown in growth, with the next round of GDP figures projected to come in below population growth levels.

Nigeria recorded a real GDP growth of 3.4 percent in 2021 but with agriculture, the single largest contributor to GDP, and oil and gas, as well as industry, challenged, the outlook for the whole economy in 2022 is poor. 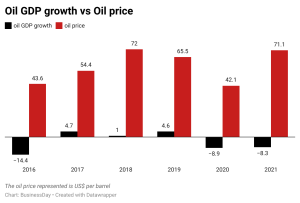 From an initial forecast of 3.3 percent in February, the EIU now expects real GDP growth to decelerate to 3 percent in 2022. The World Bank and International Monetary Fund (IMF) are less optimistic with growth projections of 2.5 percent and 2.7 percent, both of which are lower than the country’s population growth rate.

In another expected blow to GDP growth in 2022, the recent warnings from the telecom sector, which has powered growth for three years now, suggest that the sector is also being squeezed.

A second area of worry for the economy is the paradox of a failure to benefit from the spike in global oil prices and supply shortages.

Africa’s top crude producer has failed to take advantage of oil prices that have been trading at an eight-year high as it has been battling to ramp up output to reach its full OPEC+ quota due to persistent production troubles.

Energy exporting countries across the world are reaping a sudden windfall but not for Nigeria, which for the first time is seeing significant pressures on both foreign exchange supply and public revenues at a time of rising oil prices.

Not surprisingly, while Saudi Aramco declared a 124 percent increase in operating profit to $110 billion, the Nigerian National Petroleum Corporation declared only $700 million in 2020.

The report said Nigeria’s oil and gas sector is hobbled by low crude production amid a scandalous level of crude oil theft, dwindling investment, high cost of production and the debilitating effect of a petrol subsidy regime that has spiraled out of control.

Read also: What is the impact of the Russia-Ukraine crisis on Africa’s trade and economy?

The third strong wind pulling down the Nigerian economy, according to the report, is the worsening external position exacerbated by falling foreign investment.

In 2021, Nigeria’s trade deficit ballooned to N1.94 trillion, according to the National Bureau of Statistics.

Foreign direct investment for the whole year fell to the lowest on record at $698.78 million, according to data from the Central Bank of Nigeria, due to the perceived harsh business environment.

Fourthly, the Nigerian economy is confronted by falling foreign reserves despite rising oil prices, which reached a peak of $139.4 per barrel on March 8, 2022. While the issuance of Eurobonds and support by the IMF helped to shore up the reserves for some time, the impact of that is now fading, according to the economists and data from multilateral agencies.

The report identified the fifth wind blowing against the Nigerian economy to include persistent fiscal pressures rising, with the continuous decoupling of revenues from high oil prices amid soaring public debt.

On a granular level, the net effect for the average Nigerian is that he or she is getting poorer, buffeted by rising inflationary pressures and worsening disposable income for each household in Africa’s most populous nation.

Nigeria’s poverty count (Nigerians who cannot afford N450 a day) has shot up from 85.2 million in 2020 to 90 million in 2021 and is now projected by the World Bank to rise further to 95.1 million this year, despite claims by the government that it is working to cut the number of Nigerians falling into the poverty pit.

At an ongoing investment expo in Dubai, potential investors were expressing worry about Nigeria’s worsening macroeconomic instability symbolised by FX and market volatility and other issues, including security challenges, high operating cost, regulatory insensitivity, and the worrying collapse in public power supply.

The economists concluded their report by saying that Nigeria’s business environment “is highly volatile and is faced with a unique set of challenges that are being worsened by the global shock.”

The economists counselled businesses pummelled by these forces to seek mitigation in cost efficiency, focus on their customers, improve their marketing and to focus on their core competence.