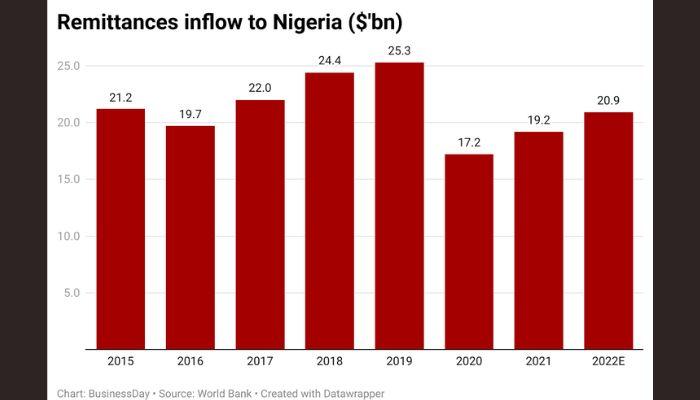 Money sent home by Nigerians who live abroad is projected by the World Bank to hit $20.9 billion this year, with analysts citing the ‘Naira-4-dollar’ scheme and talent exodus as major factors behind the expected increase in remittances.

Many Nigerians have relocated to the United Kingdom, Canada and the United States, among others, in recent years in search of greener pastures, a development that is popularly called ‘japa’ (a Yoruba word for “run quickly”).

According to the World Bank’s latest Migration and Development Brief report, remittance flow to Nigeria grew by an estimated 8.85 percent in 2022 from $19.2 billion last year.

Africa’s biggest economy saw its diaspora remittances plunge to $17.2 billion in 2020 amid the fallout of the COVID-19 pandemic from $25.3 billion in the previous year.

“Nigeria witnessed a sharp recovery in flows during 2021 (13.2 percent), maintaining the improved momentum of 2021 into the first quarter of 2022,” the report said.

It however said the remittance growth fell in Q2 to 0.5 percent compared to the same period in 2021. “Moreover, the country is reaping little benefit from the surge in crude oil prices, while the expatriate community faces real income losses in the United States, the United Kingdom, and the Euro Area.”

The World Bank said remittances flow to sub-Saharan Africa grew an estimated 5.2 percent to $53 billion in 2022, with Nigeria being the largest recipient.

Cheta Nwanze, the lead partner at SBM Intelligence, said a higher number of Nigerians have moved out of the country in recent times, adding that many Nigerians in the country are getting poorer.

“As a result of this, you now have a situation where there is more pressure on people aboard to send more money,” he said.

“If these remittances are able to stay within the banking system, meaning they pass through the CBN window, the bank can tap some amount of the remittances and shore up foreign reserves,” he said.

Introduced last year, the scheme helps to make remittances through formal bank channels cheaper and more convenient for Nigerians in other countries. It allows recipients of diaspora remittances through CBN’s money transfer operators to earn a rebate of N5 for every $1 received as remittance inflow, according to the CBN.

Over the past three years, highly educated and skilled Nigerians have been migrating to other countries as a result of the harsh economic conditions in the country that have been worsened by high inflation, unemployment, and insecurity, among others.

Many have relocated to countries such as Canada, the UK and the US through study and work visas.

“The trend of the ‘japa’ syndrome has increased in recent periods and it is expected to continue. So, the projected increase in remittances is expected to come from the set of new emigrants, especially the professionals,” said Moses Ojo, a Lagos-based economic analyst.

Experts believe that cash flows from diaspora remittances, an example of brain capital export, appear to be more resilient in the face of global economic changes compared to oil prices.

They believe that it could help lessen the foreign exchange pressures and revenue deficits facing Africa’s most populous nation.

Crude oil production, a major source of revenue for the federal government, declined by 30.2 percent to 972,394 barrels per day (bpd) in August from 1.4 million in January, data from the Nigerian Upstream Petroleum Regulatory Commission show.

In October, it rose by 11 percent to 1.01 million bpd from 972,394 in August. The country’s oil sector contracted for the tenth consecutive time in Q3 by 22.67 percent, according to the National Bureau of Statistics.

Amid the decline in oil production, the country’s foreign reserves tumbled to $37.11 billion in November 30, 2022, the lowest in 14 months.

“When we look at the net oil performance side by side with remittances, we can see more clearly that Nigerian brains working in the diaspora contribute more to the economy than oil,” analysts at PwC Nigeria said in a recent report on brain exports

“In addition to the trends reshaping the global human capital value chain, Nigerians have shown they can consistently generate significant cash flow from foreign economies,” they said.

Read also: What to know about CBN’s MPC and monetary policy

The report added that Nigeria can continue to grow its foreign exchange cash flow by inserting more citizens into global value chains.

“The Nigerian economy is not generating enough jobs, making it lose out in terms of productivity; so there will be an increase in remittances,” Nwanze said.

According to the World Bank, remittances can help alleviate poverty, improve nutritional outcomes, and are associated with increased birth weight and higher school enrollment rates for children in disadvantaged households.

“Studies show that remittances help recipient households to build resilience, for example through financing better housing and to cope with the losses in the aftermath of disasters,” it said.