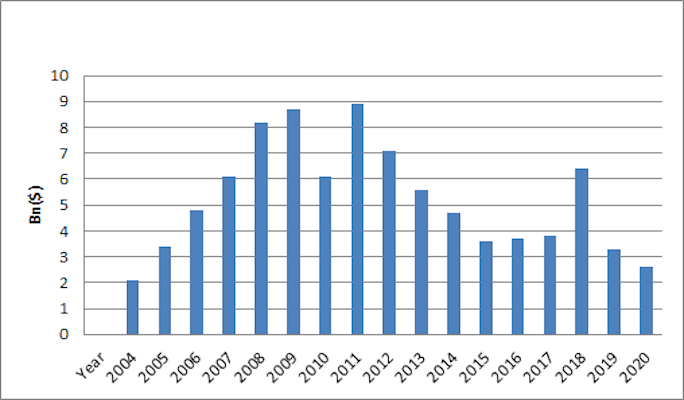 For a population of over 200 million people, the promise to create jobs is turning peril as Africa’s biggest economy attracts a miserly Foreign Direct Investment (FDI) inflow of $2.6 billion in 2020, the lowest since 2005.

The consistent decline in FDI has stifled job creation in Nigeria and worsened the growth prospects of an economy wallowing in its second recession in five years.

According to global investment trends monitor report released by the United Nations’ Conference on Trade and Development (UNCTAD), FDI inflows to Nigeria dropped from $3.3 billion in 2019 to $2.6 billion in 2020.

UNCTAD attributes the decline to low crude oil prices and movement restrictions imposed to curb the spread of coronavirus.

Nigeria has struggled to attract FDI since the collapse in oil prices in 2016.

Damilola Adewale, a Lagos-based economic analyst, notes that the subdued FDI inflows will translate to low FX supplies, saying, “When you match this with the huge FX demand, it means the economy will continue to face FX pressure.”

On January 25, 2021, the exchange rate between the naira and the dollar depreciated closing at N394.50/$1 at the NAFEX (I&E Window), where FX is traded officially while black market rate stood at N477.

Another worrying concern for Nigeria’s investment climate is the news by international oil companies to reduce their stakes in the Nigerian oil industry amid political instability, uncertain security situation in the Niger Delta, impasse on the Petroleum Industry Bill (PIB), and human and environmental right controversies.

According to Africa Oil+Gas Report, Conoil, owned by Mike Adenuga, has paid a deposit for the purchase of 40 percent equity held by Chevron Corp. in Oil Mining Leases (OMLs) 86 and 88.

Both fields contain 55 million barrels of yet-to-be exploited (2P) oil and 2.8 trillion cubic feet of undeveloped gas reserves. The conclusion of this sale means that Chevron has disposed of all the legacy shallow water assets it acquired when it purchased Texaco in 1999.

“The oil companies are selling off mostly onshore assets. This is because the overall cost of maintenance is high mainly due to security issues with host communities,” Ademola Henry, team lead at the Facility for Oil Sector Transformation (FOSTER), states.

Early this month, Heirs Holdings, in partnership with Transnational Corporation of Nigeria plc through TNOG Oil and Gas Limited, acquired a 45-percent participating interest in OML 17.

The acquisition from the Shell Petroleum Development Company of Nigeria Limited, Total E&P Nigeria Limited and ENI was described as one of the largest oil and gas financing in Africa in more than a decade, with a financing component of $1.1 billion, provided by a consortium of global and regional banks and investors.

The recent sales are also part of a broader retreat by international oil companies from Nigerian oil and gas fields that have been plagued by pipeline theft as well as uncertainty over the West African country’s tax regime.

The nation’s huge infrastructure deficit is another major investment deterrent. The lack of stable power means manufacturers have to rely on expensive alternative energy sources, such as diesel generators.

In addition, many investors are fearful that despite a large population, there is no viable market for their products due to the high rate of poverty and unemployment.

Egypt recorded the highest influx of FDI among African nations with a total inflow of $5.5 billion, representing a 38-percent drop. Despite the drop, Egypt remains the top investment destination in Africa. South Africa, a major competitor for FDI inflows in sub-Saharan Africa, attracted less with $2.5 billion.

“This weak investor confidence is expected to persist in 2021 because of lack of clarity around the country’s FX management framework,” Adewale states.