For a country with Nigeria’s infrastructure deficit, the government should borrow more given its paltry revenues but its utilisation of the little it borrows and even earns has left a trail of criticism that has suppressed the need for more ambitious borrowings that can give the sleepy economy a leg up.

Akinwunmi Adesina, president of the Africa Development Bank says the country needs $100 billion annually for 30 years to close its infrastructure deficit. That comes to N41 trillion annually, that’s more than Nigeria’s entire debt stock (N38 trillion as at September 2021, according to data from the Debt Management Office) and about 10 times the government’s revenues in 2020.

The amount spent on infrastructure every year, which is an average of 20 percent of the budget in actual terms since 2015, has been much lower. In that time, Nigeria’s GDP growth has been too weak to curb spiralling poverty.

Some economists point to a debt to GDP ratio that is one of the lowest among emerging market peers while others rightly highlight the country’s revenue to debt service which is running at above 70 percent. 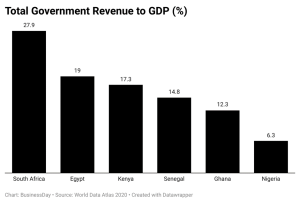 Nigeria’s problem, however, has severally stated by the finance minster, Zainab Ahmed and even her predecessor Kemi Adeosun, is not one of high debt but low revenues.

“We are not even borrowing enough relative our GDP size,” said Uche Orji, the managing director and CEO of Nigeria’s Sovereign Investment Authority (NSIA) . “Malaysia has about the same GDP as Nigeria but its debt is about 200 percent of GDP and its revenues much higher than Nigeria’s, so we should be more ambitious with our borrowing,” Orji said.

A breakdown of Malaysia’s government spending shows that the debt has been mostly spent on infrastructure projects while Nigeria has mostly spent on salaries, a wasteful petrol subsidy and debt servicing. 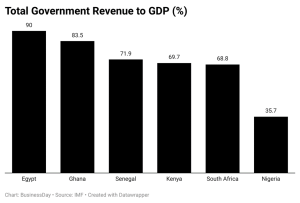 Data by the Debt Management Office (DMO) shows that Nigeria grew its debt stock by N5 trillion between December 2020 and September 2021, with the debt stock rising from N33 trillion to N38 trillion. The government has spent more subsidising fuel which mostly benefits the rich than it has spent on roads, education and health.

The government’s high debt service to revenue contributes in no small part to making it difficult to make a case for higher borrowing.

Nigeria spent N2.49tn on debt servicing payments in the first nine months of 2021, according to data obtained from the Debt Management Office.

Broken down, Nigeria’s total domestic debt of NGN22.4trn is split between federal government (FG) debt of NGN18.2trn and states’ NGN4.2trn as at 9M’21 which implies 81% and 19% respectively. The FG’s debt comprises FGN bonds, treasury bills, savings bonds, sukuks, green bonds and promissory notes. FGN bonds and treasury bonds are the most important sources of domestic sovereign debt, constituting around 93% of the government’s domestic debt as at 9M’21.

Total external debt in the first nine months of 2021 of USD38.0bn comprises of multilateral funding of USD18.3bn, bilateral loans of USD4.4bn, Eurobonds of USD14.4bn, diaspora bond of USD300m, and promissory notes of USD604m.

In January 2021, about USD500m in Eurobonds matured and were repaid by the FG, while it raised around USD4.0bn Eurobonds in September 2021. Total external debt has risen by 14 percent year to date and 19 percent year-on-year respectively.

Nigeria’s 2021 Appropriation Act had a fiscal deficit of NGN5.6trn. According to the plan, around NGN4.7trn was expected to be financed via debt instruments. In July ‘21, the president signed a supplementary budget that approved a further debt allowance of NGN802.1bn. DMO data reveals that total domestic debt issuances in 2021 are around NGN8.2trn, excluding the USD4bn Eurobond issuance and IMF disbursements (loans) to Nigeria. A new FGN Sukuk bond of NGN250bn is currently open and will close on Friday, 24 Dec ‘21.

“In the past five years, realised federal revenues have barely hit 60% of annual targets. With debt on the rise and relatively weak revenues, debt sustainability is now more concerning,” analysts at FBN Quest said Tuesday.

“According to the budget office data, Nigeria’s debt service to revenue reached 72% in 2020, and based on the current trajectory, it could surpass 2020 levels this year. Therefore, reforms and diversification of the government’s revenue base are necessary for immediate fiscal improvements,” the FBN Quest analysts added.

EXPLAINER: Why Nigeria’s inflation rate grew in the last 9 Decembers

Who needs a brand culture?

Africa cup of nations: What stands out?

Is it worth living in Lagos?-A review of Professor Hope Eghagha and Karen King-Aribisala’s…