This year, one of the major talking points for most Nigerians is a controversy between wealthier Nigerian states and the federal government over who should collect Value Added Tax (VAT), a tax levied on the price of a product or service at each stage of production, distribution or sale.

However, in 2021, some states argued that the federal collection of VAT is defined by structural inadequacies and unfair distribution among the 36 states and the Federal Capital Territory (FCT). Wealthier states are leading a revolt against the current state of affairs, arguing that they should keep more of the cash raised in their own states.

Last September, a Court of Appeal in Abuja granted an injunction pending an appeal for states to maintain the status quo, meaning that both Lagos and Rivers states are likely to desist from actually collecting VAT until a definitive judgment is made by the Supreme Court, which is likely to ultimately decide the issue.

Despite the controversy, BusinessDay’s analysis showed how some states, sectors, and industries performed in 2021. 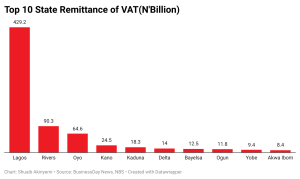 From January to August 2021, Lagos; Rivers; and Oyo State topped the list of the most states generating VAT with the total amount of N429.20 billion, N90.293 billion and N64.646 billion respectively which represented 55.3 percent, 11.6 percent, and 8.3 percent generated by States during the period respectively.

On the other hand, Zamfara, Benue, and Kebbi State generated the lowest revenue of N598.1 million, N1.268 billion, and N1.284 billion during the same period under review. 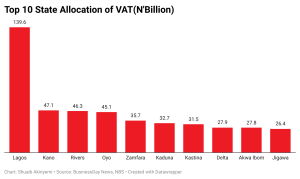 Lagos, Kano, and Rivers State got the highest VAT state allocation from January to August 2021, with totals of N139.59 billion, N47.08 billion, and N46.27 billion, representing 13.6 percent, 4.6 percent, and 4.5 percent of VAT generated by states during the time, respectively. 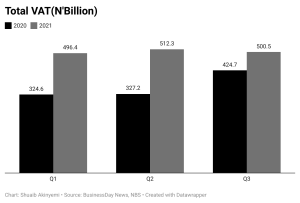 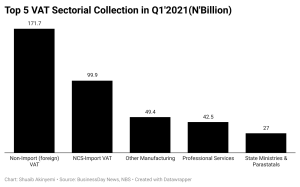 Looking at the sectoral collection of revenue generated over the period, collections from the Non-Import (foreign) VAT; Nigeria customs service-import (NCS-import) VAT and Other Manufacturing accounted for the top three largest generations of revenue in Q1 2021 with N171.66 billion, N99.88 billion, and N49.41 billion which represented 34.58 percent, 20.12 percent and 9.95 percent of the total VAT collected respectively. 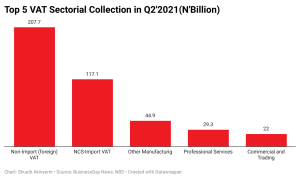 Similarly, the Non-Import (foreign) VAT; NCS-Import VAT; and Other Manufacturing accounted for the top three largest generations of revenue in Q2 2021 with N207.69billion, N117.13billion, and N44.89billion which denoted 40.54percent, 22.8percent, and 8.76percent of the total VAT collected respectively. 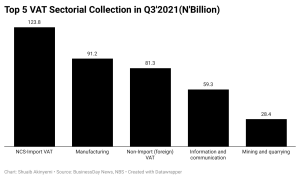