…actualisation rate may drop to 40% thanks to COVID-19 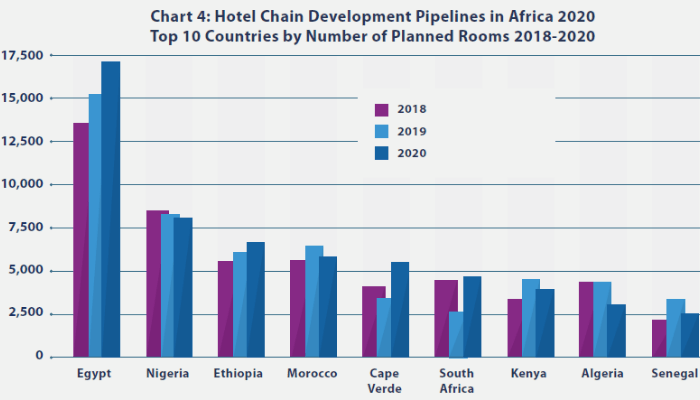 Egypt is attracting the most investment dollars from international hotel chains and leads on the African continent with the largest number of rooms in the pipeline, more than twice the number in second-place Nigeria.

Accor, an international hotel chain and owners of Ibis Hotel, has continued to be extremely busy in North Africa. Of the total of 4,227 rooms that were signed in Egypt in 2019, some 78 percent (3,278 rooms) were signed by Accor. They have now 20 deals with 8,774 hotels in Egypt, according to the latest African Hotel Chain Development Pipeline for 2020 by W Hospitality Group, one of the industry’s most authoritative sources.

On the contrary, the pipeline in Nigeria has decreased by 2 percent from last year, with signings running at only eight deals and 1, 071 rooms in 2019. Four of these were by newcomer Continent Worldwide Hotels, and two by Hyatt, who also signed deals in Uganda and Kenya last year.

Growth of the international chains’ presence in Africa has been a positive story since 2009 according to W Hospitality Group citing the numbers of the chains, the developers, the investors. This, they said shows opportunities that Africa presents in the hotel and tourism industry.

“However, our industry has been devastated by the impact of COVID-19, possibly more so than most other economic sectors, mainly because of the almost total shutdown of borders and the aviation sector – no flights means no guests,” Trevor Ward, managing director, W Hospitality Group said in a note sighted by BusinessDay.

Trevor said according to the Group’s latest data, there are 90 hotels with 17,000 rooms scheduled to open in 2020, but they estimate that at least half of these will be delayed, bringing the actualisation rate down to no more than 40 percent. Cairo and Addis Ababa have by far the largest pipelines, followed by Lagos and Nairobi.

The hospitality data crunching Group anticipates that it is going to be a fact in the “new norm” of post-COVID-19 that all markets globally will be oversupplied. This means there will be insufficient demand to go around. They also see development activity slowing down considerably for a while, because of the supply-demand scenario, and also because of a greater scarcity of funding. More hotels are likely to be pushed out into the “to be confirmed” (TBC) opening date category.

This year’s African Hotel Chain Development Pipeline survey covers 35 international and regional hotel contributors across the 54 countries in North and sub-Saharan Africa and the Indian Ocean islands. It shows a 3.60 percent increase on the 2019 pipeline.

Accor performed particularly well; it opened 18 hotels last year with almost 3,500 rooms in its various brands, ranging from Ibis to Fairmont. However, Hilton topped the list of brands ranked by the number of rooms These are only hotels branded as Hilton and does not include other brands in the Hilton chain such as Hilton Garden Inn, which is shown separately.