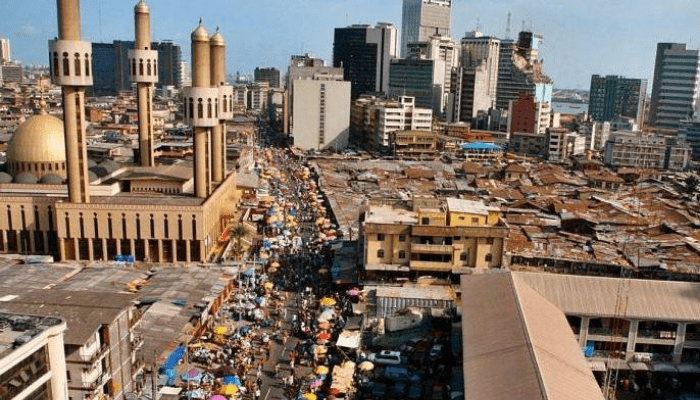 Nigeria entered this crisis in a weak position. If we look at average real GDP growth in the last three years prior to the crisis, it was at 2%, roughly half the growth in peer countries and firmly below population growth.

Inflation at 12% was roughly three times the average in peer countries. So in other words, average Nigerians were experiencing both falling real per capita income as well as facing a higher cost of living prior to the crisis.

Let’s look at a couple of key macro balances; I have here consolidated fiscal deficit and current account deficit. When we compare these levels to how they were in 2014 which was the last time before Nigeria experienced a commodity shock, these balances were much worse last year. And what is more worrisome is how these deficits were financed. For example, the fiscal deficit was to a great degree financed through monetization or central bank borrowing, while the current account deficit was financed was significantly financed through short term portfolio flows.

In other words, Nigeria entered this crisis with low policy space as well as risky financing structure. So not surprisingly, Nigeria has been hit hard.

For sub-saharan Africa in general, the impact of COVID-19 has been through three channels; lower global demand, sharp drop in commodity prices and difficult financing conditions.

For Nigeria specifically, the external impact was felt through two channels; a precipitous drop in oil prices. So, Bonny light prices went from a peak of $72 to something like around $20 and even at that price we read reports that there were unsold cargos. It was a huge drop in oil prices.

On the capital account front, Nigeria was already experiencing capital outflows since Mid-2019 because of policy uncertainties. When COVID-19 came, this was accelerated.

In the chart on display, you have the total foreign holdings which include fixed income securities, equities and OMO bills, it dropped close to 14 billion since 2019 or roughly 40%. Again, you have a huge shock there.

The pandemic is expected to have a very heavy toll on the economy. Let’s look at growth first; Real GDP is expected to contract by almost 5.5% this year, impacted by both productions cut, so last year oil production was 2 billion barrels and our current projection for this year is 1.67 billion barrels. There’s production cut but more importantly, the non-oil, nonagricultural economy is also being hit. Because oil prices are low, there’s spillover impact from the oil sector to the nonoil economy but also because of the COVID-19 close down and contractions in domestic activities.

When we look at Q2, Nigeria doesn’t have a lot of high frequency indicators but if we look at Google mobility index, PMI etc. things that are available, we see a sharp contraction across domestic activities. From this aspect of impact, 2020 GDP contraction is large.

On the right of the slide, I have a chart of how 2020 is looking now versus how it did before the COVID-19 crisis, and you can see significant downturn revision not just in growth but across various states. So revenues are much lower while the fiscal deficit is now projected to be 7.3% of GDP. Of course, the current account has taken a big hit despite import contraction, we are going to see current account deficit stay quite elevated at 3.9% of GDP, and because capital inflows have dried up a part of financing need will have to be made through a drawdown of reserves so you will see a drop in international reserves as well.

So let’s look at recovery, we are projecting GDP to slowly come back to its pre- crisis level. So it’s actually going to take three years in our baseline projection for real GDP to come back to the 2019 level and this is in line with what happened during the last crisis, it took about three years for real GDP level to come back to the precrisis level. If you look at the full five-year horizon, cumulatively, real GDP is growing only by 5%, so 1% per year, so in others words, we are going to see the pace of decline in real per capita income even pick up in the next five years, so it’s quite a dismal projection. And as dismal as these are, there are still downside risks and large uncertainties because pandemic cases are still on the rise in Nigeria itself, there’s low testing, even compared to SSA countries, so nobody really knows how the pandemic will play out in Africa and Nigeria. After that global uncertainties we don’t know if there will be a second wave, we don’t know if the vaccines will be out. There could be upside risks too in the sense that maybe COVID-19 disappears but it is more likely that we are going to be surprised on the downside and if that happens then the recovery that we expect to start in 2021 will not take place, 2021 will see a zero growth.

Let’s look at what the government is doing starting with fiscal policy.

So the budget was revised in important ways in response to this crisis. On the revenue side, oil prices and production were revised down in the light of developments in Q2.

On the spending side, the government has removed fuel subsidies and introduced an automated fuel price formula. Capital spending has also been prioritized to address the impact of the pandemic, the budget contains a COVID-19 intervention fund of about N500 billion to support health care facilities, provide relief for taxpayers, and incentivize employers to retain and recruit staff during the downturn.

Government has also increased social register; people on social assistance by about a million households to 3.6 million.

Moving on to intervention of the monetary front. Several things are happening here, on a macro level, the central bank recently cut monetary policy rate, this is happening everywhere across SSA as well as other parts of the world to support the economy. The MPR is the case if Nigeria is directly related to the savings rate so that’s helping banks’ interest rate margin. There has also been a huge release in liquidity in the domestic debt market. So late last year, CBN introduced a policy prohibiting non-bank domestic actors from holding OMOS as these holdings are maturing and these non-banks institutions are offloading their positions, the liquidity is finding its way into government papers keeping the government’s cost of borrowing in the domestic market very low.

The CBN has also adjusted the official exchange rate as you know in March took 360 from 307. On a sectoral level, CBN plans to inject liquidity of N3.6 trillion through various credit facilities to support medium and small enterprises and affected households, pharmaceuticals sectors as well as domestic manufacturers, also interest rate on all applicable interventions has been cut from 9% to 5%. The CBN has also introduced regulatory forbearance in the form of deferred debt service payment for COVID-19 affected businesses. So there is a lot happening on the policy front both from CBN and the government.

Nigeria has always been to me, a fascinating country with huge potential, there’s nothing it doesn’t have. Nigeria has a huge population, natural resources and yet this is a country when you compare to its peers on social indicators and living standards, it is not where it should be.

Per capita income used to be $ 7,000 in the mid- 1980s since then, it has gyrated in sync with oil prices. There are quite a few challenges Nigeria needs to tackle if this course is to be altered. At the current population growth rate of 2.6%, Nigeria’s population is projected at 400 million by 2050. The labour force is growing very rapidly much of which is getting absorbed in either the informal sector or not employed at all. In the informal sector, wages are very low.

Basic literacy among the young population is very low. Six of out ten out of school children is Nigerian so these are very sobering statistics. When you look at poverty rate, it is around 40% and given the population projection, by 2030 World Bank estimates a fifth of the world poorest people will be housed in Nigeria. When you add regional dimension, the situation is even scarier because you will the concentration of all of these low statistics in one part of the country.

To turn Nigeria’s population into human capital so the economy grows, Nigeria needs strong job growth and investment in social indicators; education, health and some of the very basic services.

My colleagues in the IMF did a basic estimate of how much it would cost the country to reach the SDGS and they came up with 18% of GDP which would come largely from the government even though donor community would help. This reemphasises the importance of growth because without stronger growth to raise revenues, and without those revenues, it would be hard to provide for these very basic and much-needed amenities.

The second challenge is to reduce the dependence on oil, in some ways the Nigerian economy has achieved diversification. Oil only counts for 10% of GDP and 1% of employment so you can say that’s a kind of diversification but the non-oil economy depends heavily on the oil prices through direct and indirect linkages and oil also accounts for 50% fiscal revenues and over 80% of exports and oil is also important for FX inflows even though remittances help. Because of this, to have any form of meaningful diversification, Nigeria needs to move on these fronts as well; diversify fiscal revenues, exports, in addition, to diversify GDP base because relative to this is the risk perception. Nigeria’s DNA is oil and unless diversification is seen on both fiscal and external fronts, this perception is unlikely to change and this perception needs to change if we are to avoid the big cycles.

Nigeria also has to safeguard oil resources, it is important to diversify but it is also important to safeguard what you have. Fiscal revenue from oil production is dropping over time meaning the share of the pie going to the government has been declining which is not good. There are two problems with that, one is that the government has less money to spend on the very basic and important needs I spoke about before.

The second thing is that it sends a very negative signal because oil is a national wealth and belongs to everyone. If people have a feeling that it is not being appropriated properly, it dents their confidence and incentive to pay taxes. So it is really important to preserve oil fiscal revenues.

Oil fiscal wealth from the Sovereign Wealth Fund (SWF) is not looking good. Nigeria has about five years if oil savings but when you look at the size of the SWF it’s really small by itself and tiny compared to 2020 budget or per capita.