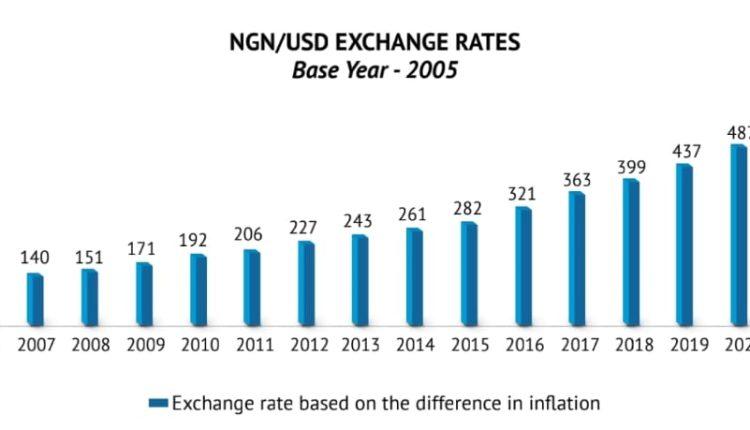 Nigeria may have to allow a 10 percent yearly depreciation in the naira and adopt what economists call a crawling peg to fix a protracted crisis in its foreign exchange market that has spooked foreign investors and raised the cost of doing business in the import-dependent country.

The recommendation was made by Bode Agusto, chief executive officer of consulting and credit ratings firm, Agusto & Co.

The naira fell to a record-low of N720 per US dollar last week in the parallel market, where most businesses from manufacturers to airlines source dollars, before recovering some lost ground on Monday to close at N690 per USD.

That was in sharp contrast to the country’s official rate, which was relatively stable and even closed stronger at N416 per US dollar last week from N420 the previous week.

The embattled currency is now down 20 percent since January in the parallel market, causing inflation to spiral and exposing the impracticality of the country’s insistence to adopt a hard peg, whereby the exchange rate is fixed and not allowed to weaken at the official market.

However, the scarcity of dollars at this market has pushed the majority of the economy to the parallel market where the naira now trades at a premium of around 70 percent, the highest on record.

Agusto said a possible solution to the foreign exchange crisis in the market is for the government to ditch the failing hard peg policy and allow the naira to weaken in line with the long-term inflation rate of the currency and that of the dollar.

Allowing the naira to depreciate against the USD by close to the difference in annual inflation every year can be termed a crawling peg.

If this is done, then the currency would have to depreciate by 10 percent annually, which is the difference between Nigeria’s long-term inflation rate (12 percent) and that of the US.

“This is the option we recommend for Nigeria,” Agusto said. “Today, this means starting at a NGN/USD exchange rate of around 600/1 and then allowing the currency to depreciate by around 10 percent per year.”

“It also means allowing knowledgeable willing buyers to do business with knowledgeable willing sellers at contracted rates. The CBN may intervene in the market when rates are significantly higher or lower than its target. Kenya and Botswana have successfully managed their exchange rates for a number of years using this option,” he said.

Nigeria’s politicians and policymakers “need to eat humble pie and accept that a peg to the USD though desirable is unattainable,” Agusto added. “A 10 percent annual depreciation against the USD is predictable, businesses and households that are dependent on imports can plan for it.”

An economist who did not want to be named commended Agusto’s idea but had some modifications. First, he suggested a clear and transparent market framework was needed to guide the interventions of the CBN.

Secondly, he said a basket of currencies, as opposed to the USD inflation spread, should guide the yearly devaluation of the naira, and concluded by recommending a transactions tax that political actors lose if people abandon the market as a way to ensure they do not destroy the market.

The disadvantages of Nigeria’s current practice of a hard peg far outweigh its gains.

While the hard peg has the benefit of dampening imported inflation, its disadvantages include reducing the naira amount of oil revenue that goes to the federation account and undercharging duty on imports.

This is particularly worrying, given the country’s revenue crisis, with debt service costs overtaking total revenues in the first four months of 2022 by 18 percent.

Under the hard peg policy, exporters are also forced to sell their USD at the official exchange rate, thus subsidising importers.

The most prominent examples of countries that have successfully pegged their currencies to the dollar are the oil-rich countries of Saudi Arabia (since 2003) and Qatar (since 2001) but there are others like Panama (since 1904) and Belize (since 1978).

Nigeria may also struggle to fully float the currency due to the volatility of its main source of dollar inflows – crude oil exports, according to Agusto.

This means allowing the forces of demand and supply to determine the rate at which the local currency exchanges for the USD.

Countries that have been able to do this successfully are those that are able to achieve a long-term rate of inflation that is not significantly different from that of the benchmark currency – the USD.

Examples are the UK, Eurozone, Japan, and Singapore.

“We do not recommend this option for Nigeria as there will be a lot of exchange rate volatility because of the large difference between NGN inflation and USD inflation and the fact that oil revenues, Nigeria’s principal source of USD fluctuates wildly,” Agusto said.

To curtail rising inflation, Agusto said the government should focus on managing its population growth, which would curb demand, and then work to get a greater proportion of the people to work and produce, thereby boosting supply.

“Costs of inputs are certainly rising in Nigeria, particularly materials and overheads but labour costs are not keeping pace with inflation. However, is this the root cause of inflation in Nigeria? We don’t think so,” Agusto said.

He said: “Nigeria adds five million people to her population every year and this results in a significant increase in demand for food, housing, clothing, healthcare, and other things. In addition to this, over 22 million Nigerians, willing and able to work, are unemployed.

Nigeria’s headline inflation surged to a five-year high of 18.6 percent in June 2022, and economists predict the rate to hit 20 percent by year-end amid rising food and energy costs.