After five consecutive quarters of negative growth, Nigeria’s trade sector bounced out of recession in quarter two (Q2) of 2021, then continued in third-quarter (Q3), though on a moderated rate. 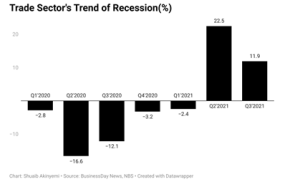 The Trade Sector’s Contribution to GDP 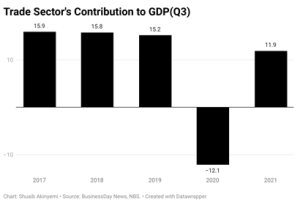 Compared with the third quarter (Q3), the last trade surplus made by the trade sector was in 2019 and after which it has made trade deficit for two consecutive years of 2020 and 2021.

According to the National Bureau of Statistics (NBS) foreign trade in goods statistics (Q3 2021) report, Nigeria’s total trade stood at N13.28trillion indicating an increase of 58.6percent compared to N8.37trillion in Q3’2020 having total export and import of N5.13trillion and N8.2trillion respectively. 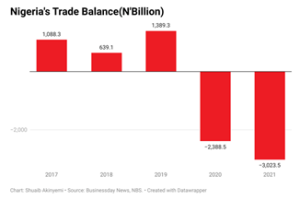 The data reviewed showed that in the third quarter of 2021, Motor Spirit ordinary capped the items of goods imported into the country. It was worth N1.05trillion and accounted for 12.91percent of total imports. Durum wheat (Not in seeds) was 3.87percent in second place and Gas Oil was in third place, covering 2.77percent.

Compared to the same period of the previous year, Motor Spirit ordinary topped the items of goods imported into the country. It was worth N532.6billion and accounted for 9.9percent of total imports. Durum wheat (Not in seeds) was 3.93percent in second place and Used Vehicles, with diesel or semi-diesel engine, of cylinder capacity >2500cc was third place, covering 3.2percent. 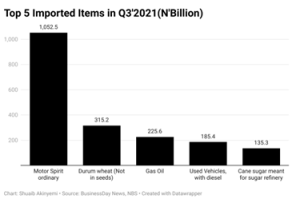 According to the data reviewed, Petroleum oils and oils obtained from bituminous minerals, crude topped the items of products exported out of the country in the third quarter of 2021. It had a value of N4.03trillion and accounted for 78.48percent of all exports. Natural gas, liquefied was in the second position with 9.5percent, while floating or submersible drilling was in third place with 3.19percent.

Petroleum oils and oils obtained from bituminous minerals and crude topped the list of commodities exported out of the country when compared to the same period of the previous year. It had a value of N2.4trillion and made up 81.02percent of total exports. Natural gas, liquefied came in second with 9.28percent, followed by other petroleum gases, among others in a gaseous state which came in third with 1.87percent. 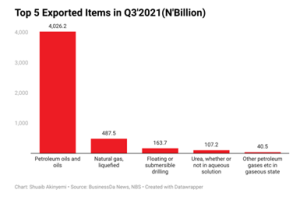 The majority of imported commodities originated from China, according to the inflow of imported items. China accounted for more than a quarter of Nigeria’s total imports in Q3’2021. That is, one dollar was sent to China for every four dollars spent on imports by Nigerians. 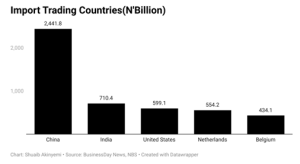 In the third quarter of 2021, India, on the other hand, may be described as Nigeria’s top business partner. The majority of Nigeria’s exports went to India, accounting for N758.1billion representing 14.78percent of the country’s total exports. This means that for every N100 received by Nigeria from exports, India received N14. 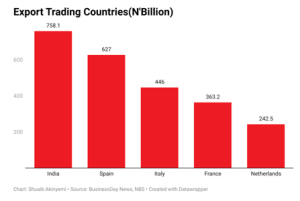