Five food items driving inflation in Nigeria and why

As essential food items go out of reach of millions of Nigerians, BusinessDay looks at the five food items that have risen the most in the last one year and what is fuelling the rapid rise.

Food inflation rose to 21.83 percent in June 2021 from 15.18 percent recorded in June 2020, caused by price increases across items such as bread and cereals, potatoes, yam and other tubers, milk, cheese and eggs, fish, soft drinks, vegetables, oils and fats and meat.

These soaring costs have been as a result of the worsening farmer-herder clashes, weakening currency and shortage of dollars for foreign exchange.

The persistent rise in food prices have put a strain on Nigerians who spend over 50 percent of their income on food, most of which are imported.

According to the 2019 consumption expenditure by the National Bureau of Statistics (NBS), the total household expenditure is N40 trillion out of which N22.7 trillion is spent on food.

Nigerians spent N3.8 on poultry and poultry products, N2.4 on non-alcoholic drinks, N2.1 on milk and milk products and N1.30 on Coffee, tea, cocoa, and other beverages, according to the report. 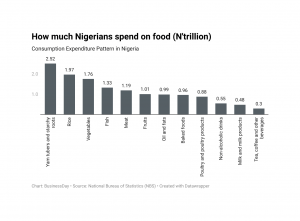 The food items driving inflation and why their prices have surged

Food prices accounted for the over 60 percent increase in headline inflation between 2020 and 2021. The growth pace of prices of goods and services rose to 17.75 percent in June 2021 compared to 12.56 recorded in the same time last year.

Bread and cereals, potatoes, yam and other tubers, milk, cheese and eggs, fish, soft drinks, vegetables, oils and fats and meat were the cause.

Five of the foods Nigerians eat the most on this list are chosen and the reason for the price hike in these items are explained.

The price of bread has risen over the past one year as bakers and caterers face incessant increase in the price of raw materials such as wheat and other baking ingredients. This has put the much beloved Agege bread out of reach of many for whom it is a staple.

“FX depreciation and liquidity challenges have affected the price of imported products such as wheat. Bread is made from flour and flour is produced from wheat, anything that is imported has experienced a serious spike in price,” Muda Yusuf, the former Director-General Lagos Chamber of Commerce and Industry (LCCI) said.

In 2015, the Central Bank of Nigeria (CBN) restricted 41 items from accessing foreign exchange, adding that the measure was to encourage local production of the items and conserve Nigeria’s foreign reserves.

In April, the CBN hinted at a plan to include sugar and wheat on the list of import items banned from accessing foreign exchange (FX).

The price of bread will further increase by 30 percent as recently announced by the Association of Master Bakers and Caterers of Nigeria (AMBCN) in order to cushion the rising cost of production.

The cost of poultry feed is largely responsible for the increase in the price of eggs.

Yusuf explained that the price of maize, a major input for poultry feed, has gone up over 100 percent.

“If the major input for the feed has gone up that high, the price will follow. If the poultry animals are not well fed, they could fall sick, die or not lay eggs anymore. Poultry farmers are under pressure to continue to feed them. The central bank has also blocked the importation of maize and people now get these raw materials from neighbouring countries like the Benin Republic.”

Cheese is also more expensive than ever before. This is because a good chunk of it is made with imported milk and salt. With naira losing its value and FX shortage, most cheese producers have to turn to the parallel or black market to obtain dollars for foreign exchange, all these factors add more cost to cheese production, driving up its price to consumers.

The farmer-herder clash continues to affect the production of food items like vegetables and the gap that local production cannot cover is passed on to the consumers in the form of high prices.

“The reason for the increase in food price is insecurity,” Femi Oke, Chairman, All Farmers Association of Nigerian (AFAN) Lagos State chapter said. “Most of the farmers hardly go to the farm anymore because of these herdsmen and bandits’ issues. I was on the farm yesterday and I saw traces of cattle dung on my farm and it is making me unhappy.”

Oke also pointed out that fuel price and bad roads make it difficult for farmers to bring their produce from the farm to the market.

The lockdown which occurred last year has also disrupted the food supply chains across the country.

The surge in international sugar prices has increased the price of most carbonated soft drinks by 50 percent. The price of soft drinks in Nigeria such as Coca-Cola, Pepsi, Bigi and others is now selling at N150 from N100 last year.

Soft drinks consist primarily of carbonated water, sugar and flavourings. Sugar, the second main ingredient which makes up between 7 and 12 percent of a soft drink.

According to the Food and Agriculture Organisation (FAO), Sugar index rose 6.8 percent in May from April due to harvest delays and concerns over reduced crop yields in Brazil, the world’s largest sugar exporter.

The high cost of Foreign Exchange has made the cost of importing sugar more expensive and producers in an attempt to cover their production cost have increased the price of soft drinks. 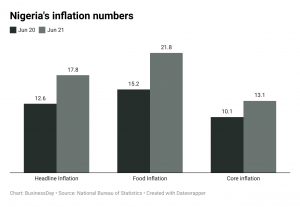 It could get worse

The persistent rise in price levels is deepening hunger and dragging more people to poverty.

The Food and Agriculture Organisation (FAO) of the United Nations in a report on food security and nutrition analysis released in 2020 has predicted that about 13.8 million people in Nigeria will be facing an acute food shortage crisis between June and August 2021.

It also said the number could grow to about 14 million if measures are not taken in time to avert the hunger crisis.

Nigeria’s surging inflation rate has pushed 7 million Nigerians into poverty, the World Bank said in its recent report on Nigeria.

The Bank estimates that about 18 percent of adults did not eat for an entire day compared to 6 percent recorded before the pandemic.

Although inflation appears to have slowed for two straight months, the World Bank says even if food production increases, certain factors will continue to lead to the rise in inflation.

“Even if domestic food production increases and supply and distribution constraints are eased, a combination of exchange-rate management problems, shortages of hard currency, border closures, expansionary monetary policy, and the monetary funding of the fiscal deficit will continue to generate inflation pressures.”

In 2020, Nigeria’s inflation rate was the seventh highest in Sub-Saharan Africa, but by the end of 2021 it is expected to rise to the fifth-highest, behind only Zimbabwe, Zambia, South Sudan, and Angola, the World Bank says.

The World Bank has advised that Nigeria facilitates the import of staple foods and medicine by removing them from the list of FX restrictions.