DSS allegations against Emefiele grabs spot in the foreign media 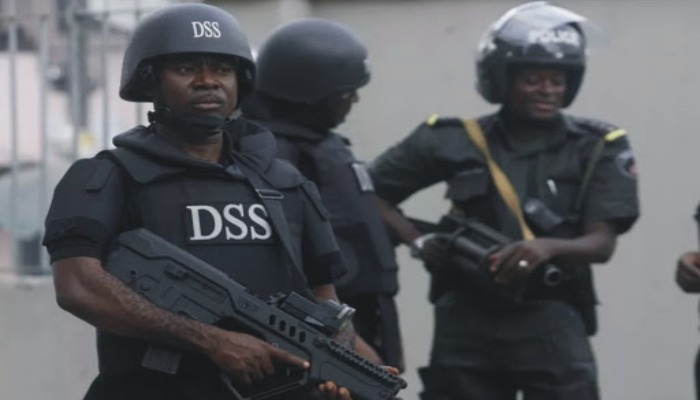 Mounting allegations made against governor of the central bank Godwin Emefiele have now found their way into the foreign media and with implications for the country’s beleaguered economy.

An account in Bloomberg which has copious quotes from an affidavit sworn to in court by the secret police, is also now putting pressure on Nigeria’s government to break its unusual silence on the growing embarrassment. It is the first time the content of the affidavit by DSS has been quoted since the salacious allegations first appeared on the online media and then found their way into mainstream media in Nigeria.

In a comprehensive report on the allegations Bloomberg now says the allegations against the head of the apex bank also include alleged financial crimes related to the nation’s multibillion-dollar public lending programs.

Emefiele has already attended several interviews at SSS headquarters during the course of the investigation, Bloomberg reported, quoting from the secret police affidavit which was tendered to court on Dec. 23, 2022.

According to the Bloomberg report, the DSS probe uncovered “emerging facts pointing to the alleged mismanagement” of Central Bank of Nigeria programs by Emefiele that financially benefitted himself and other unidentified individuals, according to the SSS affidavit. The agency has not said when it started the investigation or expand on intelligence it claims to have linking the governor to terrorism financing.

Bloomberg said one of the initiatives the DSS alleges was abused by Emefiele is the Anchor Borrowers’ Programme, through which the central bank disbursed 1.07 trillion naira ($2.4 billion) in loans to smallholder farmers to boost agricultural production.

Emefiele’s defenders say his traducers are politicians who are opposed to the on-going currency reforms aimed at cleaning up Nigeria’s electoral process by stemming the illegal use of cash but the DSS in its previously unreported affidavit, denied probing Emefiele “on the dictates or desire of any politician.” The secret police said in the filing that the CBN governor doesn’t have criminal immunity and it only initiated the first case to stop him interfering with the investigation.

According to Bloomberg which is closely followed by the world’s investor community, Nigeria’s State Security Service investigation has already yielded “credible intelligence of suspicious activities” by Emefiele,including money laundering, terror financing and misappropriation of funds, according to the previously unreported affidavit the DSS filed in Abuja, last month and seen by Bloomberg.

Bloomberg said the allegations come amid a breakdown in relations between the central bank and the DSS that began to emerge in local media last month. Defenders of Emefiele say currency reforms introduced by the central bank to control the amount of cash in circulation have drawn powerful political enemies.

The high-stakes confrontation has erupted in the run-up to presidential, gubernatorial and parliamentary elections scheduled to begin on Feb. 25. Voters in Africa’s most-populous country are often offered cash, food or clothing to persuade them to cast their ballots for particular candidates.

Justice John Tsoho rejected a request by the SSS for an arrest warrant on Dec. 9, stating that the agency failed to present any “concrete evidence” to support the allegations. However, his decision in a federal court also said that the agency can detain Emefiele without a court order if it “believes that the evidence available to it so far is sufficient.”

A week later, a non-profit organization called the Forum for Accountability and Good Leadership, or FAGL, filed a suit at a state court in Abuja arguing that Emefiele’s rights were under attack by the secret police.

Justice Maryam Hassan ruled in the second case on Dec. 29 that the SSS’s “continuous harassment” of the governor over “trumped up allegations of terrorism financing and fraudulent practices” was illegal. She also barred the agency from arresting or interrogating Emefiele in relation to his management of the economy unless it obtains permission from a superior court, according to her court order.

A DSS spokesman declined to comment when contacted by Bloomberg.

The FAGL suit in his defense said unidentified “self-serving politicians” who are angered by central bank policies designed to reduce the amount of cash in circulation are working to “frame” the governor through baseless accusations. A trustee of FAGL declined to comment.

The bank is implementing a move announced by Emefiele in October to replace high-denomination bank notes. The CBN also introduced new limits last month on the amount of cash individuals and companies can withdraw from financial institutions.

This policy “is a serious blow” to politicians that have “set out plans to rig the 2023 general elections through vote buying and electoral fraud,” the FAGL told the court.

Amid speculation in the Nigerian media in recent weeks that the SSS would arrest the governor once he returned from a trip abroad, the central bank’s spokesman issued a statement on Jan. 16 saying that Emefiele had returned to work in Nigeria “with renewed vigor to perform his duty.”

Emefiele was hired to lead the central bank in June 2014, a year before President Muhammadu Buhari came to power, and was reappointed to a second five-year term in May 2019. He has been one of the outgoing administration’s most influential figures in an unorthodox tenure during which the CBN has made major interventions in the economy, including propping up the naira, lending unprecedented sums to government and extending credit to multiple sectors. A spokesman for Buhari told Bloomberg to refer its questions to the SSS.

The governor also made a highly visible, if short-lived but controversial, foray into party politics in May, asking a federal court to permit him to remain in charge of the central bank while running to win the ruling party nomination for next month’s election.

He abandoned those ambitions after Buhari, who cannot stand for reelection, ordered ministers and political appointees seeking to run for office to resign their posts