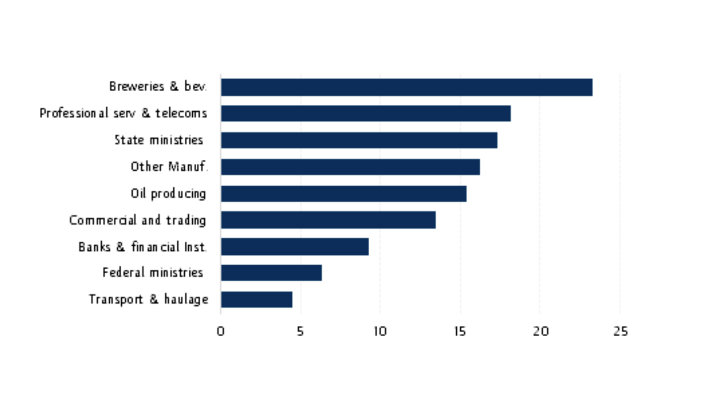 Nigeria’s leading private sector firms are showing healthy signs of recovery from the slump they suffered last year on account of the still raging Covid pandemic, at least when seen from the data on the company income tax they paid to the government in the first quarter of 2021..

The tax data is drawn from the company income tax (CIT) report by sectors for Q1 ’21, produced by the National Bureau of Statistics (NBS) in conjunction with the Federal Inland Revenue Service (FIRS).

Acording to analysts at FBNQuest, the report reveals that total CIT collections increased 33% y/y to NGN392.8bn.

The analysts said, “supportive of the double-digit y/y growth in CIT collections were the return to growth trajectory of some important sectors of the economy such as manufacturing, which expanded by 3.4% y/y in Q1 compared with a contraction of -1.5% in Q4 ‘20.

“This was reflected in the solid Q1 earnings performance reported across board by most of the non-financial names under our coverage. The sum represents gross CIT receipts for the federation, of which the federal government receives the majority.”

Other key highlights of the report are:

· In Q1, NGN152.3bn was collected locally, while NGN184.6bn was generated as foreign CIT payment. A category named others which includes CIT through electronic channels accounted for the balance of c.NGN55.9bn.

· Zooming down on domestic CIT payments, the breweries and beverages sector generated the highest amount of CIT at NGN23.3bn. We recall that within the manufacturing sector the foods, beverages and tobacco segment posted the fastest GDP growth rate of 7.1% y/y in Q1 ‘21. Another notable sector is professional services, including telecoms which generated N18.2bn.

· The Q1 CIT data imply an annualised (not adjusting for seasonality) amount of c.NGN1.57trn for 2021, which is roughly 11% more than the NGN1.4trn CIT generated in 2020. The first quarter tends to be the weakest, according to historical trends.

· A separate data series on value-added-tax (VAT) produced by the NBS shows that VAT collections expanded by c.53% y/y to NGN496.4bn in Q1 ’21. The increase can be attributed to a 250bp increase in the applicable rate to 7.5% in 2020. Unlike with CIT, the formula for the distribution from the VAT Pool favours the states rather than the FGN.

· Nigeria’s tax-to-GDP ratio at c.4% still lags its continental rivals like South Africa and Egypt whose ratios are c.29% and 17% respectively.

· Some recommendations for boosting Nigeria’s tax-to-GDP ratio include a further increase in the VAT rate to bring it closer to the 15% rate applicable in other parts of the Economic Community of West African States (ECOWAS), an expansion of the tax net to bring previously untapped segments of the economy on board, and the rationalisation of tax exemptions to plug loopholes.