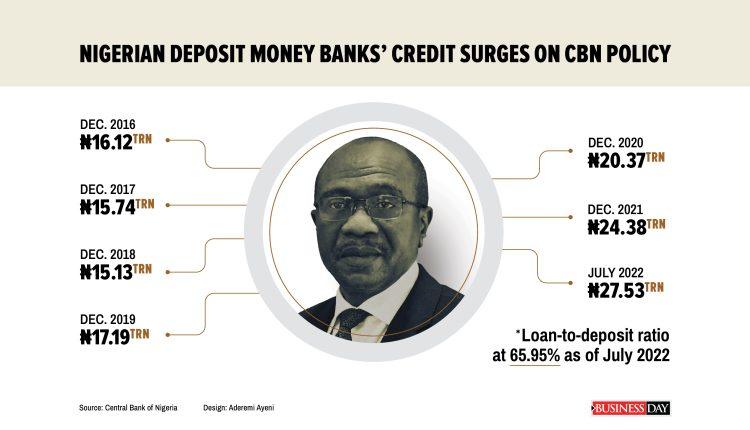 Nigerian deposit money banks (DMBs) recorded a loan book growth of 76 percent in three years on the back of a central bank policy that requires them to increase lending to the real sector.

A sectoral analysis of the DMBs’ credit by the Central Bank of Nigeria (CBN) shows that loans to various sectors rose to N27.53 trillion in July this year from N15.61 trillion in July 2019.

The apex bank had, in a circular dated July 3, 2019, mandated the banks to maintain a minimum loan-to-deposit ratio (LDR) of 60 percent by September 30, 2019 in a bid to improve lending to the real sector of the nation’s economy. The minimum LDR was in October 2019 raised to 65 percent.

It said to “encourage SMEs, retail, mortgage and consumer lending”, the sectors would be assigned a weight of 150 percent in computing the LDR.

The central bank said failure to meet the requirement would result in a levy of additional cash reserve requirement (CRR) equal to 50 percent of the lending shortfall of the target LDR. The CRR is the share of a bank’s total customer deposit that must be kept with the central bank in the form of liquid cash. It is currently at 27.5 percent.

The introduction of the policy followed two straight years of decline in bank credit, with the LDR dropping to 57.42 percent in July 2019 from 79.95 percent at the end of 2016.

Following the collapse in global oil prices that started in mid-2014, the country slipped into recession in the second quarter of 2016 and emerged from it a year after.

Six months after the policy was introduced to ramp up economic growth, credit by the banks surged to N17.19 trillion, with an LDR of 68.46 percent at the end of 2019.

But from the start of 2020 to the end of last year, the LDR ranged between 58.35 percent and 62.68 percent amid the economic fallout of the COVID-19 pandemic, which saw the country plunge into another recession. The LDR rose to 65.95 percent in July this year from 59.12 percent at the end of 2021.

Nigeria’s real sector, which includes agriculture and manufacturing, is not doing well, according to the former member of the Monetary Policy Committee (MPC) of the CBN.

“Once your interest rate is double-digit and rising, you are going to have problems; and it has been so in the last 16 years or so in Nigeria.”

The CBN hiked its monetary policy rate to 13 percent in May from 11.5 percent to combat soaring inflation. It further increased the benchmark interest rate to 14 percent in July.

It said notwithstanding the prevailing global supply constraints, the Russian-Ukraine crisis and insecurity challenges in Nigeria, “we anticipate a 16.5 percent year-on-year loan growth in 2022 as more banks now have a better understanding of the macroeconomic headwinds.”

“Traditional sectors such as oil and gas, manufacturing, general commerce and agriculture sectors are expected to drive the loan growth, given the backward integration initiatives of obligors, the intervention activities of the CBN and the import-dependence nature of the Nigerian economy,” Agusto & Co said in its 2022 report on the Nigerian banking industry.

“While the arbitrary cash reserve deductions and foreign exchange illiquidity would remain limitations to the growth of the industry’s loan portfolio, we note that more banks are now favourably disposed to accessing the differentiated cash reserve requirement window to reduce the value of sterile restricted funds with the CBN,” it added.

Aishah Ahmad, deputy governor, financial systems stability at CBN, said in her personal statement at the last MPC meeting that the continued resilience of the financial system and flow of credit to the real economy further strengthened the positive outlook for output expansion.

She said: “Gross credit has maintained an upward trajectory since 2019, rising by N5.02 trillion between June 2021 and June 2022 with significant growth in credit to manufacturing, general commerce and oil and gas sectors.

“This notable increase was achieved amidst continued decline in non-performing loans ratio from 5.3 percent in April 2022 to 5.0 percent in June 2022.”

Another MPC member, Robert Asogwa, said total assets of the banking industry grew by 22.07 percent from N53.64 trillion in May 2021 to N65.48 trillion in June 2022, driven by balances with CBN/banks, open market operations bills and credit to the real sector of the economy.

He said the decline in non-performing loans was attributable mainly to write-offs, restructuring of facilities, Global Standing Instruction (GSI) and sound credit risk management by banks.

The GSI, which was introduced by the central bank in 2020, gives banks the authority to debit loan defaulters from accounts they operate in other banks within Nigeria.

“Gross industry credit, which stood at N27.06 trillion in June 2022, has risen steadily since 2019, largely due to the bank’s LDR policy,” another MPC member, Aliyu Sanusi, said. “Analysis of the interest rate band reveals that 65.9 percent of customers borrowed a total of N4.77 trillion at interest rates of less than 15 percent as of June 2022, suggesting that interest rates are declining as credit to the real sector of the economy continues to increase.”

As of June 2022, a total of N3.38 trillion was lent to beneficiaries at less than a 10 percent interest rate through the CBN intervention funds, he added. 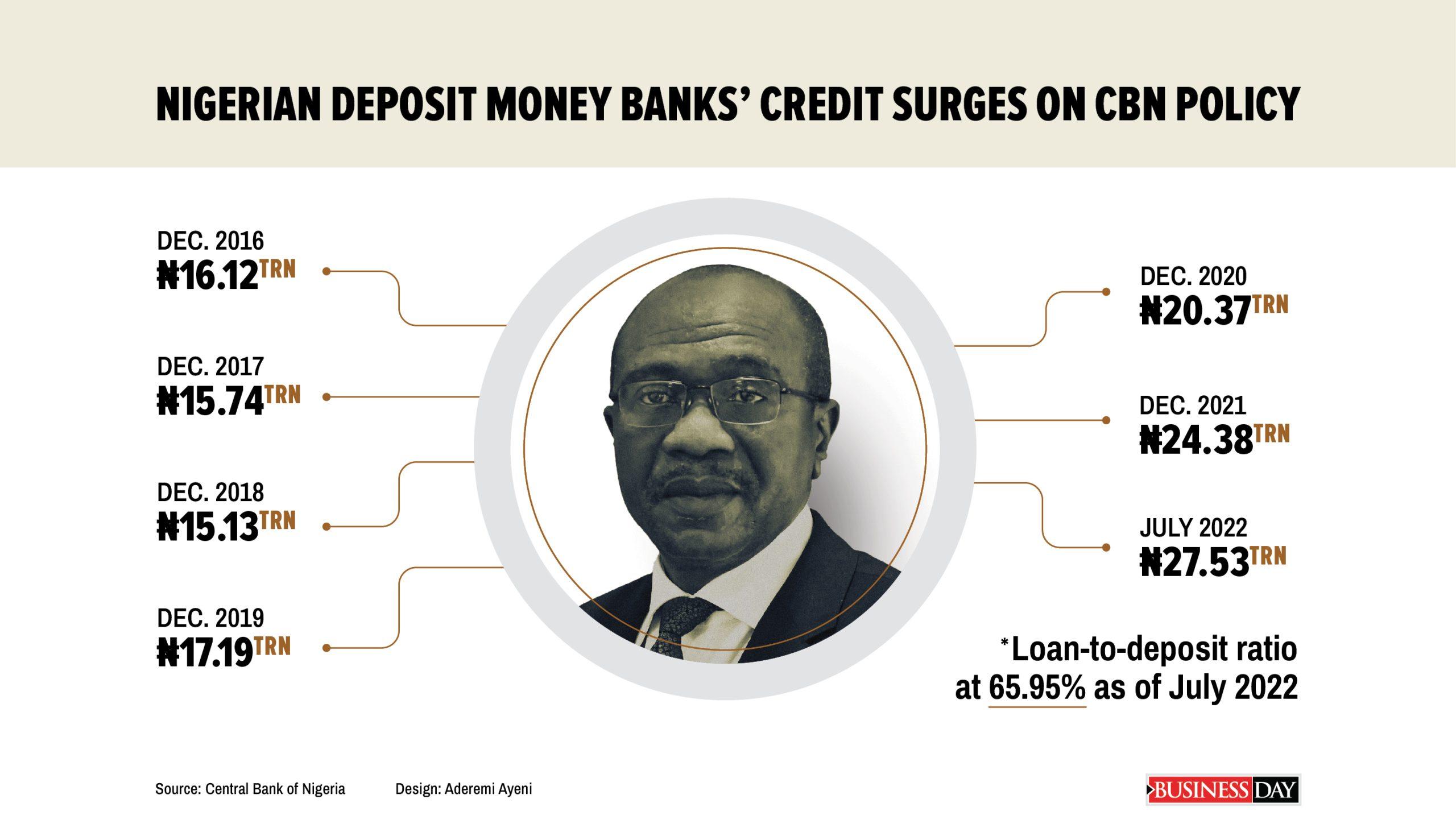