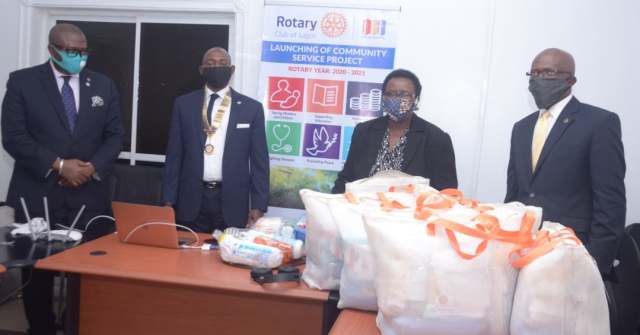 As part of its humanitarian interventions, Rotary Club of Lagos recently donated some birth delivery kits to Itamarun Health Centre in Lekki Free Trade Zone Area of Lagos, for the use of expectant mothers in the area.

Delivering the items to the representative of the community, and the head of the Itamarun Health Centre, in Lagos, President of the Club, Dare Adeyeri stated that the decision to donate the items was informed by the need to check the high infant mortality rate in the area.

The newly elected President, stated that in tune with the club’s philosophy of giving, the Rotary club of Lagos decided to intervene after a careful study of the needs of the community.

He added that besides the donations, the organisation had also come up with several interventions, aimed at alleviating the plight of this riverine community, which it had adapted as its community.

One of such interventions, he stated, was the disbursement of soft loans to the women in the community to assist them in their petty businesses.

“We are also trying to build a primary school for the people in the community, to enable the children in the community have access to quality education, without having to trek kilometres , every day.

“We believe this is a year of giving like never before. The interventions have become necessary to alleviate the plight of the people of Itamarun Community. Itamarun community is flood-prone. It is supposed to be a fishing community. But with the dredging of the area, they no longer have much space to farm. There is so much poverty in the area, hence the various interventions,” he stated.

Receiving the items, the representative of the community, and a retired matron at Itamarun Health Centre, Helen Folarin commended the Rotary club of Lagos for coming to the aid of the community.

TopExec enters into partnership with Superlife to deepen marketing