Producing Nigerian passport in Nigeria is beyond Nigeria 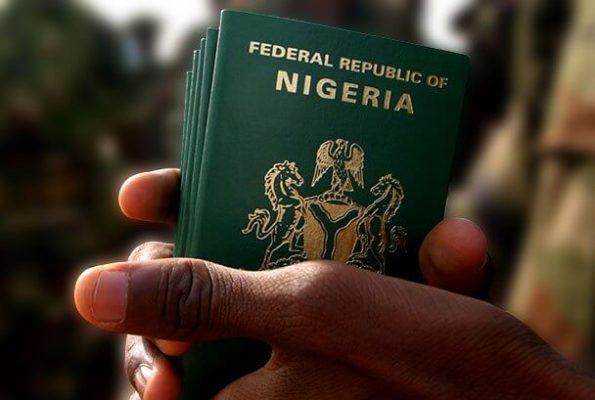 In July 2017, Muhammad Babandede, the then comptroller-general of the Nigeria Immigration Service (NIS), announced that plans were underway for the domestication of the production of the Nigerian e-passport.

Speaking to members of the House of Representatives Committee on Interior, Babandede said the NIS was working round the clock with the support of the federal government to start the local production of the e-passports through the Nigerian Security Printing and Minting Plc (NSPM) by 2018.
He said the move was meant to cut costs, ensure security of critical databases and create more jobs for Nigerians.
In February 2019, the federal government signed a Memorandum of Understanding (MoU) on domestic production of the country’s passports. The agreement was signed between Iris Smart Technology Limited, an indigenous company, and NSPM at the Ministry of Interior in Abuja.
Abdulrahman Dambazzau, the then minister of interior, who witnessed the signing of the MoU, said that producing the document locally would provide employment for Nigerians to acquire skills in passport production as well as technological know-how in production of high-quality passport booklets.
“We must ensure that we provide Nigerians with the best quality passport booklet because that is what Nigerians deserve,” he had said.
Five years later, the desire to produce Nigerian passports in Nigeria has yet to materialise.
BusinessDay gathered that the NSPM does not have the required capacity to produce Nigeria’s passports. It cannot even produce the country’s currency notes. The bulk of the country’s currency notes are produced outside Nigeria.
The NSPM has for more than 40 years outsourced the production of Nigeria’s currencies to foreign companies.
The Nigerian passport project is fundamentally an IT project. It is an IT project because apart from the printing of the booklet itself, the other components of the passport are electronically and data-driven. From the servers and hardware infrastructure, software, telecommunications, databases and data warehouses and human resources and procedures, Nigeria’s passport production is way beyond the capability of the country’s mint to execute.
The bulk of the cost of the project is the IT component. The booklet itself is less than 10 percent of the entire component of the passport.
Issued since 2007, the harmonised ECOWAS Smart electronic passport issued by the Nigerian Immigration Service (NIS) is powered by biometric technology in tandem with the International Civil Aviation Organization specifications for international travels. Travellers’ data captured in the biometric passport can be accessed instantly and read by any security agent from any part of the globe through an integrated network of systems configured and linked to a centrally-coordinated passport data bank managed by the NIS.
The difficulty in producing the Nigerian passport in Nigeria is multi-layered and the outcome of poor investments over the years. To produce a Nigerian passport means producing, among others, the gold foil, security paper, a Radio Frequency Identification chip that stores a unique number that refers back to an individual’s biometric data.
None of these are produced locally.
Over the years, Nigeria’s manufacturing capacity has consistently declined. Manufacturing is dominated by the production of cement and building materials, food and beverages, tobacco, chemicals and fertilisers, wood, and textiles. Out of all, only three subsectors (food and beverage, cement, and textile) account for 77 percent of manufacturing output, generating the greatest value.