Nigeria Decides 2023: The state of play 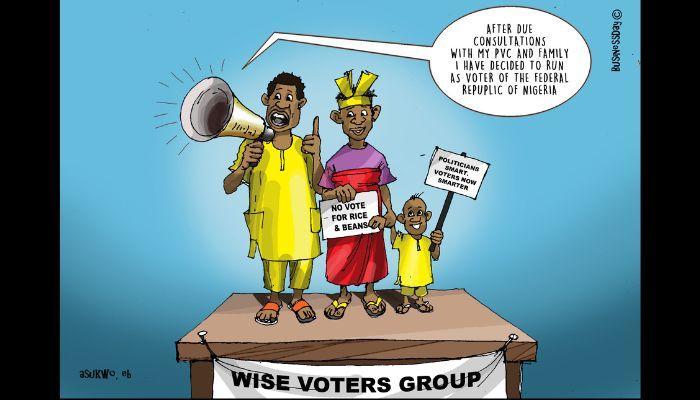 According to the timetable by Nigeria’s Independent National Electoral Commission (INEC), presidential and national assembly elections will hold 25th of February 2023, the seventh since the return to democratic rule in 1999.

In line with the same timetable, the official campaign by the political parties for who takes over from President Muhammadu Buhari starts in two days – 28th of October 2022.

Given the developments since the Presidency changed hands in 2015, the 2023 presidential election is increasingly becoming a very critical one for Nigeria.

The changes to the electoral law, especially the signed Electoral Act of 2022, replacing that of 2010, is poised to make the 2023 elections very interesting, in two major respects.

First is the Permanent Voters Card (PVC). Before the PVC, the constant electoral cycle registration was a cesspit route to corruption and rigging, underscored by multiple voting.

On the back of the card reader in 2015, President Muhammadu Buhari beat an incumbent President and marked the first time that happened in Nigeria.
For the general elections next year, INEC has developed a new technology for the process.

The Bimodal Voter Accreditation System (BVAS) is touted to reduce multiple voting through improved verification of PVCs and the uploading of results real time on election day.

However, reports from its use in Isoko South 1 constituency election in September 2021, the Anambra State governorship election in November 2021 and the recent FCT Area council elections in February 2022, point to a slow and poorly functioning system.

There were marked improvements in the Ekiti and Osun elections in June and July 2022, respectively.

Now, in 2023, whoever becomes President, will inherit an economy that is less in size compared to that of 2015. In that year, the size of the Nigerian economy in current US dollars was US$546.68 billion and using 2021 figures, it is about US$436 billion.

In nearly eight years of President Muhammadu Buhari, he has presided over an average GDP growth of less than 1.16%, two recessions, and declining per capita income. The new President will be confronted by the largest domestic and external debt in Nigeria’s history, a relentless insecurity problem, and a polarised nation.

Following from Covid – 19 and the war in Ukraine, the United Nations released a report highlighting three dimensions of the present global crisis – food, energy and tightening financial conditions crisis.

The report – Global Impact of War in Ukraine on food, energy, and finance systems released April 2022 is the latest to show the devastating effects of the ongoing crisis on many developing countries, including Nigeria. These problems will be there in 2023.

Indeed, as in recent elections of 2015 and 2019, the elections will be contested on four major themes.

However, given the scale of the problems that the country faces since the 2015 elections, the weight of the disappointment in the presidency of Muhammadu Buhari, the emergence of a third and some will argue, a fourth force, the length of the period between the presidential primaries of the parties, and the changes to the methodology of the elections, next year’s elections could be a watershed in Nigeria’s political history.

Now, the major issues of this elections. The first is the continuing economic fragility in Nigeria.

Since the 2015 election, the highest quarterly growth rate recorded was the 5.01 percent growth rate recorded in Q2 2021. But this year-on-year growth was only in comparison to the miserable decline in growth in the previous period in the year before due to Covid – 19.

Since 2015, Nigeria’s growth has averaged 1.16%, lower than the population growth rate of about 3% in the period. Every Nigerian child born since 2015 has been born into a shrinking per capita pie. Indeed, President Buhari will handover an economy less in size than the one he inherited in 2015.

As the fig. 1 above also shows, the new President in 2023 will have to deal with the continued weakness in the Nigerian economy following two economic recessions in five years – 2016 and 2020, and enormous macroeconomic instability, including volatile growth, unsustainable debt, oil theft and weak oil resources, significant unemployment and most important, worsening insecurity of lives.

Second, unlike in 2015, corruption is not expected to be a significant issue in this campaign.

Not because corruption, and its perception, is better than it was in 2015, but because two of the presidential candidates – APC and PDP, do not enjoy a widespread anti-corruption perception amongst the Nigerian public.

There is also now a widespread admission that under President Buhari’s government, while the government ramped up rhetoric on corruption, used existing laws to secure convictions against perceived enemies, it largely accommodated corrupt tendencies amongst those in his government.

The third major theme in the election will be insecurity. In 2015, President Buhari, as a former army general, was thought to be better placed to solve the many security challenges facing the country.

However, since 2015, while Boko Haram has been slightly weakened, bloodier conflict erupted in the Middle Belt in the form of violent attacks on many communities, largely by herdsmen, banditry in the North West, including the President’s home State of Katsina, and kidnapping.

Fourth, it will be contested in the context of the desire for changes in the structure of the Nigeria’s federal system. Although there is no clear nationwide definition or agreement on the nature and description of the structural changes required, the common theme is devolution of powers from Abuja to the States within the federation.

The structural debate has been elevated following recent escalation of insecurity, and poor economic conditions that is exacerbating poverty.

Ahead of the elections in February 2023, BusinessDay is committed to being your guide to everything you need to know about the candidates, the issues, and the political environment and competition that will determine who becomes Nigeria’s next president.