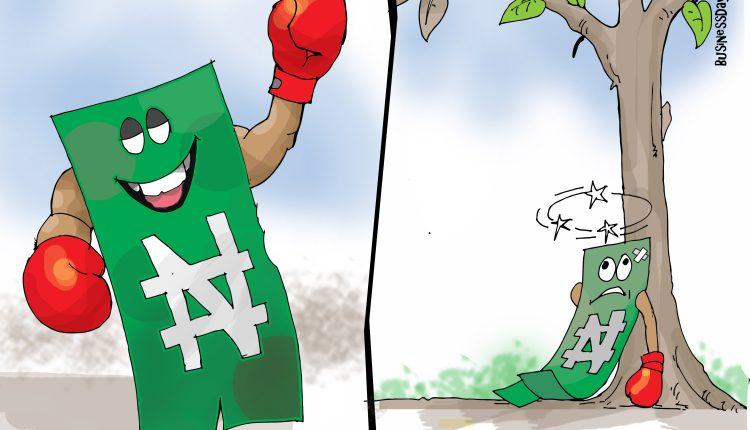 Nigeria does not collect as much tax as it should. The federal government and the states together collect taxes worth a mere 6 percent of GDP, which is one of the lowest in Africa and in the world.

The country’s tax collection is neither wholly automated nor centralised, with collection rates very low, and little awareness of how much is truly owed.

While expenditure continues to balloon, tax revenues continue to be scanty. What is clear is that Nigeria’s current fiscal crisis can only get worse with the government indulging its pitiable tax base.

Poor tax collection reduces the government’s ability to spend on critical public goods, and on social provisioning, and stunts the nation’s ability to make progress.

Just as the government faces challenges in revenue collection, there has been upward pressure on public spending, which has outstripped revenue growth. Debt servicing costs constitute an unbelievable 90 percent of that expenditure. Public-sector salaries and wages make up 60 percent of government spending, a higher proportion than in other emerging markets.

Nigeria suffers from low tax compliance contributing to depressed revenue mobilisation, said Frank Aigbogun, publisher of BusinessDay and a board member of Nigerian Economic Summit Group (NESG). “At six percent, Nigeria’s tax to GDP ratio is lower than the average for African countries, which currently stands at about 18 percent,” he said at a recent NESG webinar.
Low tax compliance and poorly designed tax concessions, he warned, could trigger unfavourable economic conditions as recently observed in Sri Lanka.

A 2013 McKinsey report observed that developing and fast-growing economies “that fail to capitalise on the benefits of rapid economic growth are missing a tremendous opportunity to improve the quality of life for their citizens”.

It said in a rapidly developing economy, “a 10 to 15 percent increase in tax revenues which sounds ambitious but is quite achievable often translates into an ability to double expenditures on, for example, health care or education”.

Nigeria’s Federal Inland Revenue Service (FIRS) says it has made significant improvement in tax collection since President Muhammadu Buhari administration came into office. Available data from the agency show that the devil is in the details.

In 2021, FIRS said it collected N6.40 trillion, compared to N3.74 trillion in 2015. While tax collection has shown moderate expansion since 2016 in terms of numbers, the value of taxes collected has actually not increased significantly. The overwhelming bulk of taxes collected by the revenue body come from taxes on petroleum profits (PPT), company incomes (CIT), gas incomes, capital gains, stamp duty and VAT. The oil and gas companies, which receive their incomes and profits in dollars, as well as telcos still pay the bulk of taxes; including PPT, CIT, gas incomes, capital gains. The oil companies sell their oil and gas in US dollars and remit their taxes in the local currency. Thus, with the precipitous and continuous fall in the value of the naira against major global currencies since late 2015, their tax obligations to the government in terms of quantity have increased as they receive more naira and thus pay more in the amount of taxes.

Simply put, the volume of tax collected by FIRS has increased because of the fall in the value of the naira and not because of any strategy that has facilitated enhanced tax collection.
Telecoms giant MTN’s total tax contribution to all government agencies including the FIRS amounted to N757.6 billion. The company paid a total of N618.7 billion in direct and indirect taxes to the FIRS in the 2021 tax year, which makes it the largest single biggest contributor to taxes in Nigeria at 13.5 percent.

The low tax base of the country, Vice-President Yemi Osinbajo noted in February, “is symptomatic of undue reliance on oil revenue as a result of fiscal imbalances in our nation’s financial landscape”.

These imbalances continue to barricade efficient and effective tax collection and reforms with government revenue authorities typically having limited data on the number of potential taxpayers, lacking effective tracking tools, and having gaps in capabilities and resources. In addition, tax collection processes are often complex and burdensome.
According to Rajneesh Narula, economist and professor of International Business Regulation at the University of Reading, the first thing to do is to have effective enforcement of taxation.

He said: “This is one side to the story. Yes, there is a tax base and in principle a large number of tax receipts and customs receipts, the civil servants are remitting PAYE and companies have to remit the same. But we know that a lot of companies do not remit the PAYE of their workers and there is the challenge of engaging efficiently with the FIRS that is a barrier to efficient enforcement.

“In addition, there is the issue of false reporting and accounting by companies that cannot be validated by the tax authority. So, with the connivance of the accountant, the books are cooked, the companies are subjected to minimal tax exposure, and small amounts of taxes are then paid, thus depriving the state of much-needed revenue. So, the first thing is that effective forensic accounting must take place in order to aid enforcement. There is nowhere in the world where people want to pay tax; they are forced to do so using carrots and sticks, and auditing and enforcement matter in this respect.”

The existence of a large shadow economy continues to cause the government to lose revenue due to tax evasion, as well as a loss of helpful productive activity due to the non-utilisation of black money in the economy.
The World Bank says that 80.4 percent of Nigeria’s employed population are in the informal sector, out of the line and sight of government and the FIRS, with only 10 percent in the formal sector and 9.6 percent in households.

The size of Nigeria’s shadow economy is estimated to be 57.7 percent, which represents approximately $1,116 billion at GDP PPP levels.
Regulatory bottlenecks, multiple taxation, and laborious business registration processes have kept the informal economy operators – a broad entrepreneurial base that is too large to ignore – away from the line and sight of government, and hence away from paying taxes.
Unprecedented job losses, the failure of the government’s economic policies, which have virtually shut down economic growth in the formal sector, has aided transition of many Nigerians into the shadow economy.

The black economy’s income is growing at a quicker rate than the economy’s overall growth rate. As a result of the underground economy, more than half of the country’s GDP is tax-free, providing a severe problem for tax collectors and a threat to the economy’s stability.

Outside the large informal economy, there are lots of creative ways that the government can collect taxes, Narula said.
He said: “People rightfully ask, what do I get for my tax? For a small business owner who is in need of better roads and better public services, the question is: why should I formalise myself when the state and its agents keep burdening me with taxes? Why should I pay education tax when the education sector does not reflect the taxes I pay, and the government cannot efficiently run education?
“The sanctioning measures under the laws are insufficiently applied to serve as a deterrent and give tax authorities too much leeway, which leads to corruption. Discretions are also not used in a transparent and justifiable manner.
“Increasing the tax base means that people have jobs and money to pay taxes. So, with the bulk of the economy in the informal sector, there must be a way to formalise the players in that large sector. Furthermore, the existing businesses; the hundreds of thousands of formal and informal shops and outlets in the country, what tax measures have been applied to them?”
For the big companies and persons who avoid or evade taxes, what is needed is the big stick. What Nuhu Ribadu did at the Economic and Financial Crimes Commission is what is needed at the FIRS. In addition, there are incentives out there to force people to pay their taxes. For example, if you want to travel out of the country and go out with money, can that ability be tied to your tax payment?

Chioma Ifeanyi-Eze, CEO of AccountingHub, said small and medium enterprises (SMEs) “are willing to pay their taxes; they only ask that they are educated on the process, that their businesses are supported, that the tax payment system is simplified and that the tax remitted will be used judiciously and you will see tax compliance grow by 60 percent from SMEs”.
While the FIRS and the Joint Tax Board, (JTB) have not demonstrated top leadership commitment to improving tax compliance and have made minimal improvement in improving tax gap databases, quick win programmes to enhance tax and tariff-collection performance have the potential to deliver enhanced revenue to the government.

According to McKinsey Global Institute, tax revenue could be boosted substantially if non-compliance including fraud, neglect, error, and non-payment are reduced. The opportunities include reducing informality to increase registration of taxpayers, and strengthening the administration of tax systems by improving data collection, using data to drive risk-based compliance, and better enforcement.
Such steps, it says, “need to form part of an integrated, comprehensive transformation program that embraces the full tax-administration value chain, from registration through to debt collection”.

In addition, improving compliance is critical to effective tax administration. Levers available include launching or strengthening initiatives to drive registration of businesses and individuals. Authorities can also reduce barriers to compliance, for example by enabling greater use of remote payments and pre-filing, and, where appropriate, by allowing defaulting taxpayers a “clean start”. Longer-term levers include the launch or strengthening of taxpayer education programs delivered through mass media.

“It has to be more strategic, it is not just about taxing more but taxing better; how much to collect and how to collect it as well as from whom to collect taxes. It has to be progressive, efficient in terms of compliance and making sure that we are targeting the right tax bases and it has to bring aboard all taxes,” said Rajul Awasthi, senior public sector specialist and co-lead of the Domestic Resource Mobilisation Global Solutions Group at the World Bank.