Nigerian lawmakers are visiting petrol stations across the country purportedly to ensure compliance with extant rules and safety precautions, something that is not their duty and leaving accusations of exploitative practices in its wake.

Lawmakers on the House of Representatives Ad-hoc Committee on Tank Farms, Petrol, and LPG Stations Compliance have been visiting petrol stations, depots and LPG retail outlets across the country to enforce compliance with public safety measures, usurping the function of the Department of Petroleum Resources.

“DPR has the statutory responsibility of ensuring compliance to petroleum laws, regulations and guidelines in the Oil and Gas Industry,” the regulator said on its website.

The DPR’s responsibilities involves monitoring of operations at drilling sites, producing wells, production platforms and flowstations, crude oil export terminals, refineries, storage depots, pump stations, retail outlets, any other locations where petroleum is either stored or sold, and all pipelines carrying crude oil, natural gas and petroleum products, while carrying out the following functions, among others.

Paul Osu, DPR’s spokesman was contacted but he did not respond to a request for comment.

Petrol stations owners who spoke to BusinessDay said that when these lawmakers get to their station, they demand for their operating licences and other statutory registrations and if they conclude that it is irregular or incomplete, they seal up the station and invite the owners to their hotel rooms for settlement.

“They are going from depot to depot and various petrol stations making money off us,” one petrol station owner who didn’t want to be identified for fear of retribution said.

This exploitative practice, sources say have been brought to the attention of the speaker of the House of Representatives Femi Gbajabiamila but nothing has been done to stop it.

“They do not have the authority to do deals in hotel rooms but that is what is going on,” the petrol station owner said.

Petrol station owners are confused about the development as this creates one more hurdle to easily doing their business.

“We are confused and concerned because our understanding is that the DPR is the only organisation recognized by law to play this role and the lawmakers role is to make laws and oversee government agencies.” said Clement Isong, chairman of Major Oil Marketers Association of Nigeria (MOMAN).

Isong said that increasingly other state and federal agencies are seeking to regulate and supervise station and depot operations “which is increasing our cost of doing business especially when we receive conflicting directives from them.

“We will seek clarification on these visits on behalf of our members and revert once the true position is established,” he said.

Last month, the House of Representatives set up an Ad-hoc Committee to take stock of petroleum products marketing firms and evaluate their level of compliance with the industry regulation and guidelines.

The lawmakers said they were acting on concerns across the country over unsafe practices of petroleum marketers, transporters, and safety of their operations.
The committee visited some petrol stations within Ilorin metropolis Kwara states three weeks ago, led by Ibrahim Aliyu, representing Wurno Rabah, Federal Constituency in Sokoto state. Aliyu said the visit was not meant to witch-hunt anybody but stimulate public safety compliance.

Another team of the lawmakers under the same committee, two weeks ago visited Okezie Ikpeazu, governor of Abia state on a purported oversight function.

The team led by Miriam Onuoha, representing Okigwe North federal constituency claimed that they were ascertaining whether tank farms, petrol, gas and other LPG stations in the state were sited in accordance with guidelines, regulations, and other safety measures.

Onuoha said that some stations in the state were approved and allocated without site inspection by the relevant bodies, she appealed to him to stop the renewal of licences of such stations until they complied with the guidelines.

Ngozi Nwogwugwu, PhD Senior Lecturer at the Department of Political Science and Public Administration, Babcock University, and Adebola Ishola PhD candidate at the same institution in a paper on Legislators and their Oversight Functions in Nigeria published in the International Journal of Humanities Social Sciences and Education averred that the oversight or scrutiny functions is best applied to executive arm agencies who carry out policy implementation.

This suggests that the committee’s role should have been limited to inviting DPR to ascertain and clarify these safety concerns.

“In fact in many countries, legislators now use the oversight function to witch hunt and blackmail political opponents rather than use is to checkmate the excesses of the executive arm of government in order to curb or guide against corruption, inefficiency and waste of public funds,” the scholars said in their study citing a reference work.

According to information from those affected, the lawmakers have people who visit these stations on their behalf to seal up stations they claim are violating law.

The enforcer-in-chief appears to be one Milicent Laz-Eke, an administrative officer at National Assembly whose contact is written on the compliance checklist issued to petrol station owners.

When contacted to clarify the allegations or ursurping DPR functions and demanding bribes from purportedly defaulting petrol station owners, Laz-Eke did not respond. 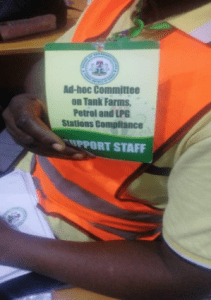 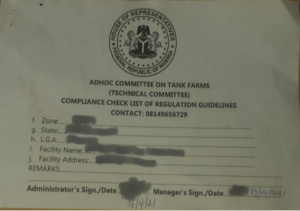 Forms issued by the lawmakers. We have blurred the details to protect our source.