Are men really scum, as some women say?-A Review of Damilare Kuku’s Nearly All the Men in Lagos are Mad 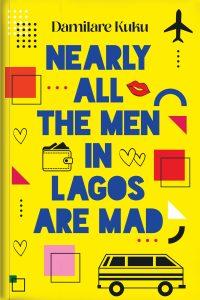 Love, it is said, is a beautiful thing until it turns sour, at which point it causes bitterness and hurt. Several women have reported men abusing them, and the number is growing; the sad stories told in the book “Nearly All the Men in Lagos are Mad” demonstrate that men can be scum.

You’ve probably seen “Nearly All the Men in Lagos Are Mad” a lot in Lagos or on the internet because it has a beautiful book cover and an unforgettable title. The book is unflinchingly honest, insightful, and hilarious.

On TVC’s Wake up Nigeria morning show, author Damilare Kuku revealed that this book was a love letter to women who have been wronged or mistreated by men, reminding them that they are not alone. And she has created some truly harrowing tales based on the experiences of several women.

When you first start reading the book, you may be tempted to skip over the dedication to get to the meat of the matter, but you get shivers. The author appears to dislike love.

Read also: What’s love got to do with valentine?

Men who are promiscuous, violent, gigolos, males who are terrified of commitment, power-hungry, egoistic men, mummy’s boys, and gay men who deceitfully use women as shields are all shown in the book. Also, a quietly intensified emphasis on how Lagos guys make impulsive, egocentric love decisions is subtly underlined. The issues that have been raised are genuine. The collection, on the other hand, has sparked controversy. Despite the reality that many of the women were just as bad as the males, women were typically depicted as victims in the stories.

Kuku’s writing abilities show her creativity, and the stories are told in a variety of ways. As another reviewer points out, the first-person point of view is the most laudable because it emphasizes the book’s intimate and conversational tone and sets the stage for brilliant storytelling.

In this work, there are no dull scenes. This book is full of laughter, surprise, and sighs. The reader will feel a variety of emotions as a result of all of these stories.

The sex scenes in this book, according to the most common criticism, were overly graphic, unnecessary, and forced. The majority of readers would agree because at least ten of the twelve stories in this collection contained unrelated sex scenes, and the book should have included a warning about the amount of adult content.

Instead of focusing on sex scenes, Kuku’s book would probably be a lot more effective if she provided some tips on where to find decent guys. However, because the anecdotes are recounted with such venom, it would be significantly less pleasurable to read.
Overall, all of the stories are excellent, and each one will certainly be chosen as a particular favorite by readers.

This book was written to be read and enjoyed, and the author may be working on another. “Nearly Every Woman in Lagos are Mad” could be the title.

About the reviewer
Titilade Oyemade is a business executive in a leading organisation and holds a degree in Russian Language. She’s the convener of the Hangoutwithtee Ladies Event and the publisher of Hangoutwithtee magazine. She spends her weekends attending women conferences, events and book readings. She loves to have fun and to help other women have the same in their lives. Email: titi.oyemade@gmail.com Social: @tiipreeofficial

So, you want to go into the ushering business? -A Review of Clementina Busayo’s…

What could be causing your child’s bad behaviour in school? – A review of…

Is loving a damaged person a form of self-destruction? -A Review of Ufuomaee’s Broken