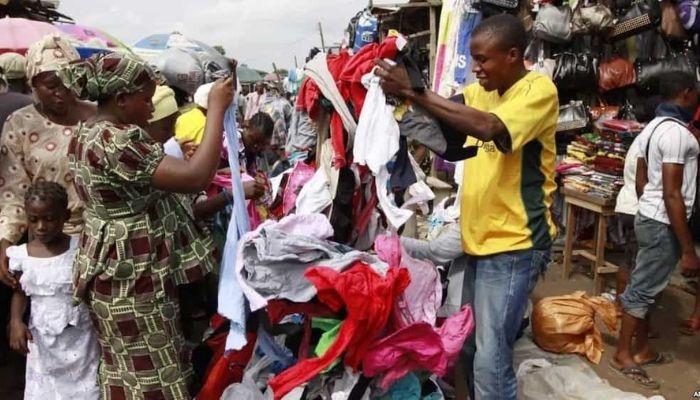 I was lucky that I got posted to Briggs Logistics for my compulsory one-year National Youth Service Corps assignment. Getting a job there was usually very difficult so I was ready to work “my ass off” to ensure that I got retained after my service year.

The first few days in the office was quite overwhelming. Not because the tasks were exhausting but because I was constantly thinking of how to upgrade my wardrobe. It was as if being fashionable was part of the job at Briggs Logistics. Everybody came to work looking like something out of a fashion catalogue. I knew that I’d have to break the bank to keep up with them. Luckily, with a few mix-and-match ideas here and there, I was able to survive the first month.

Once I received my salary, I knew it was time to up my “fashion game” but then I also had to consider the “smallness of my allowee”. I couldn’t afford to spend everything on clothes and have little or nothing left. So I decided to visit the Mile 7 night market to ‘organize’ some first grade okrika clothes for myself. I have to say that I was impressed with myself at the end of my purchase. Not that I could rub shoulders with my colleagues, but atleast I could hold my own. Overtime, I had become a regular at the night market. I knew how to get very good clothes at affordable prices, this way, I was also able to save a large part of my “allowee”.

I was doing quite well by myself until a ‘witch’ was deployed to my department for her internship. I knew right away that there was something off about her. This intern, Doris or whatever she calls herself was effortlessly pretty. She hardly wore any make-up and didn’t even put too much effort into her dressing yet she still managed to look good all the time. She even had a car. No wonder she was so full of herself. (Hiss).

I felt a chill go down my spine the first time I saw her. I knew it was her evil aura. Plus she was very pretentious but I could see through her. She would pretend to pray whenever she got behind her table in the morning but I could tell she was reciting incantations. Doris will never get to me. She and her evilness. Sometimes she tried to be friendly with me but I wasn’t interested in her friendship. She’s darkness and I’m light.. we have nothing in common.

So, here’s my story. One morning I was behind my desk at work and the next minute I was being whisked off to the hospital. I was so sick I couldn’t even explain how I was feeling. That was how the steady decline in my health started. The doctors couldn’t diagnose what was wrong with me even after various tests were carried out.

It would have been somewhat bearable if I had to deal with my health alone but there was also this recurring nightmare that stole sleep from my eyes. I was afraid of sleeping because a menacing looking woman would always come out of a grave brandishing a cutlass and threatening to kill me in my dream. I knew this was all Doris. I don’t know what I did to deserve so much hatred from her. She even had the nerve to visit me at the hospital. I started screaming when I saw her and the nurses had to ask her to leave.

I had been in the hospital for over three months and there no improvement whatsoever. I even missed my passing out parade from the youth service. My health was deteriorating more and more, I wasn’t getting any sleep at all, I was hallucinating a lot and gradually losing my mind. The doctors said things could get worse and they advised that my family begin to make plans to take me to a mental institution.

Then suddenly things began to change. I woke up one evening and I was told that I had been sleeping for over twelve hours. The doctors could not explain the dramatic turn of events. “It’s either a miracle or magic”, they said. But my parents had an explanation for what happened.

They told the story of how a certain Doris had visited our home and told them that I had something in my possession that belonged to a dead person. The supposed dead woman had a sentimental attachment to a particular green dress that I bought from the okrika night market and she wanted it back. That’s why she kept coming to my dreams to constantly hunt me.

Doris knew this because she has been praying for me to get well and this information was revealed to her during prayers. My parents were desperate for a solution so they searched my wardrobe for all the green clothes I have. Since they didn’t know which particular one it was, they decided to set all of them on fire just as Doris had instructed.

I remember that green dress. It was a masterpiece. I bought it because I wanted to oppress Doris and make her “green” with envy. I wore it to work on the day I started feeling funny and I remember how Doris kept looking at me. Not with envy as I would have expected but with confusion written all over her face. What did she even know about fashion anyway?
My intention was to slay in my clothes but the joke was on me. I was almost slayed by the clothes.

Well, within a few days of that great reveal, I was discharged from the hospital. I felt much better and I owed it to Doris. I wanted to call her but ofcourse I did not have her phone number. I eventually got it from someone at the office but the number was always unavailable. I went with my parents to the office so we could express our gratitude to her but we were informed that her internship was over. I asked for her home address but as part of company policy, HR would not divulge that information.

For several months I was carrying unnecessary “beef” in my heart for someone that would eventually save me from imminent death. Now I couldn’t even get a chance to say thank you to her. I felt bad for judging Doris wrongly just because I was jealous of her. Yes, I admit that I was jealous.

I hear people say there’s a difference between thrift, pre loved, pre owned and okrika clothes. Taking a pig from the mud into the palace doesn’t change it from being a pig. It is what it is.
Whether you shop from an online thrift store or you bend down to select from Mile 7 okrika night market, just pray that you don’t buy the item that’ll ruin your life.

I didn’t get the job at Briggs Logistics but atleast I got my life back. Please if you see Doris anywhere, kindly tell her that I am grateful.