Not alone in castle estate: Pt 2 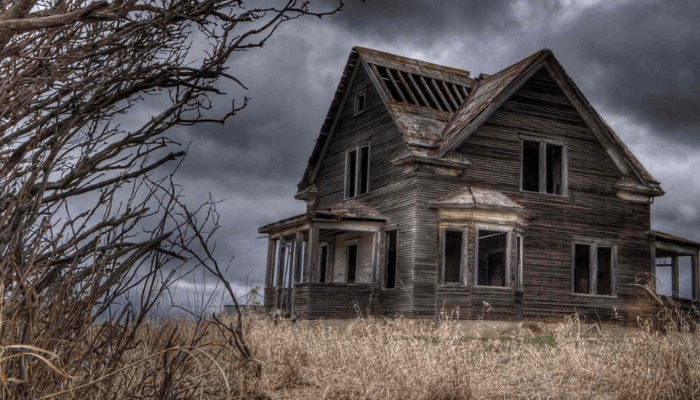 Just like she said, she was there when I opened my eyes and she was humming to one of my favourite party songs. I had lost the strength to scream. I knew at this point that there was nothing I could do. Even if I wanted to run out of my house, where will I go at that time of the night? Why me? Why was this happening to me? I stirred in my bed and my movement caught her attention.

She turned to me and asked, “Did you watch Casper the friendly ghost when you were little?”

She got no answer from me.

“Anyways, Call me Anthonia your friendly ghost, sorry I didn’t introduce myself earlier.

Let me tell you something my new friend, you have to get used to having me around ok. And if starring at my face scares the shit outta you, you can look at the roof or somewhere else. I can tell you this for free, my face scares me too”.

I tried not to laugh, she obviously had a sense of humor and I was holding back. I guess she saw my face because she teased me and said,

I couldn’t hold it back this time, I managed to let out what sounded like a chuckle and surprisingly I felt a little relaxed.

Anthonia told me that she used to be nice and bubbly just like me when she was alive. “We would have made such good friends” she said.

“Betty, I promise to be out of your hair once you do what I ask. I can’t imagine what my family would have been through all these years without knowing where I was or what happened to me. I want them to have closure. I want my killer to be brought to justice and I want to rest in peace and you’re the only one that can help me. You have to trust me that I’ll not do anything to harm you, I’m not that type of ghost. I just need your help and I’ll be gone.”

I was quiet. I didn’t know what to say. I was looking down at my hands because I couldn’t bring myself to look her in the face. Yes I was a little relaxed because she assured me of my safety but that didn’t take away my fear or rule out the fact that I had a ghost in my home and I was about to embark on a mission for it, her, Anthonia, whatever!!!

“I’m going to be with you every step of the way… (she continued), I can’t leave this house because I’m trapped in here but I have friends that will be with you to make sure you’re safe”.

I jumped out of my bed and shouted “Please don’t tell me there are more ghosts in my home”.

“No no no…I’m here alone but I know how to get my friends to go with you only when you’re on assignment for me, they’ll be there to make sure nothing happens to you”.

I thought about it again. I could tell that Anthonia was a good person so helping her was the least I could do.

“Whew” I sighed. “Tell me what exactly you want me to do for you Anthonia”.

I could hear the relief in her voice when she said, Thank you Betty. Now I can finally get what I’ve been praying for”.

Did she just say she’s been praying? Do ghosts pray?. Now that’s strange. Anyways, I listened attentively as she instructed me on the ‘mode of operation’. I couldn’t believe my ears when she mentioned her killer as the young tele-evangelist, Karl Kalunta. This was a big shocker for me. I bought my house from the Kalunta’s and I know that Karl is their son.

Anthonia told me that she had been friends with Karl for a long time and it wasn’t unusual or out of place for him to invite her for lunch, so when he called her that fateful day, she didn’t suspect anything at all. She was doing the dishes when Karl grabbed her from behind and strangled her. She tried to kick and fight back but her 5ft 6″ frame was no match for his 6ft 3″ well built body.

When he realized that she wasn’t dead, he smashed her head with a baseball bat then he buried her corpse at the back of the house. When his parents returned from their trip and asked why the backyard was cemented, Karl told them that he found a way to stop the grass from growing and they thought it was a brilliant idea.
It wasn’t long after that they began to hear scary and strange noises around they house, they had to leave when it became bearable.

That being said, I have to reiterate that Karl is a respected preacher. What could be the motivation for killing his friend? Well, I was about to find out. I tried to reach him but my efforts did not yield any result. Either his protocol team would not let me see him or his secretary would tell me that I needed an appointment to see him. I eventually made an appointment to see the ‘almighty’ Karl but he was too busy to see me. Then one day, Anthonia suggested that I attend his church and try to get his attention somehow. This was exactly what I did.

I was glad when they called for people who had testimonies, I almost fell down on my way out because I was running. When it was my turn, I gave thanks for my friend Anthonia McJoe who was back from the dead. I made eye contact with Karl Kalunta and I was sure I had his attention. The congregation didn’t need to understand what I said as long as I got the desired reaction. Just as I envisaged, the curious Karl instructed his ushers to bring me to his office afterwards.

He wanted me to explain my testimony further because he found it intriguing. Well, I thought there was no point beating about the bush since he was making it easy for me so I cut to the chase and told him that I now live in what used to be his family house and I’ve been in touch with Anthonia. He looked like he didn’t believe me at first until I gave him a blow by blow account of what happened the day he killed her. I saw his jaw hit the ground literally. This was something I couldn’t have known so he had to believe me. He was shaking. He explained how he was influenced by the lavish and expensive lifestyle of his friends who told him that he could be like them if he could bring the blood of someone dear to him. He chickened out and couldn’t go through with the ritual after taking Anthonia’s life. Fear and guilt pushed him to a church where he repented and later became a pastor.

I wasn’t moved by the tears of the distinguished Pastor KK as he was fondly called by his numerous followers. As a matter of fact, I was disgusted. The hands he laid on his followers were stained with blood and the day of reckoning had come. Anthonia wanted him to call for a press where he would openly confess to what he did. He didn’t see this one coming. He asked that I beg Anthonia on his behalf and let her know that he was a changed person. I wasn’t there to bargain with him and I told him so.

Karl wasn’t going to take this lying down. He threatened to deal with me if I said anything about this to anyone. I thought this guy was a Pastor!. Was he going to kill me like he did Anthonia? I was scared for a bit until a strong wind blew off the pictures on the wall, the papers on his table and files in the cabinet were not left out, then his chair was pulled out of his bum and he landed on the floor. Anthonia’s friends were with me just as she promised. Boy was I glad. I smile at him and said, “touch not mine anointed”.

The look on his face was priceless.

With what just happened, Karl knew that his threat had nothing on me. He had twenty four hours to do the needful or face the consequences of his actions. On my way out of his office, I informed him that our conversation was recorded.

After I left the physically and mentally drained Karl, I embarked on another long search to locate Anthonia’s family. Words cannot express the emotion that unfolded when I told them everything. The pain of a missing child was terrible in itself, finding out that the child was killed by her friend was even worse. They were eager to go to the Police but we had to follow Anthonia’s instruction. We had to wait for the twenty-four hour ultimatum to elapse before doing anything. It was a tough decision for the family but they had to do it.

I couldn’t go back to my house that night, so I stayed over at Anthonia’s parents. We hardly slept a wink that night and by the crack of dawn, the shocking news about the death of the popular preacher was everywhere. It was reported that he committed suicide. This was a good time to hit the press with my story and the recording I made. The evidence was compelling and it turned out to be the biggest news of all time.

In the days that followed, I couldn’t bring myself to go back to my house so I moved from one friend’s house to the other.

Finally, it was time to do the last bit and Anthonia’s body had to be exhumed and given a proper burial. Her family had the closure they always desired.

At the memorial held in her honor, I sat at a corner trying to absorb everything that was going on and my eyes were drawn to Anthonia’s picture. She was a beautiful girl. So sad her life was cut short prematurely.

I was sure that I saw the picture wink at me. I blinked several times to be sure I wasn’t imagining it. Then she winked at me again and mouthed the words, “Thank you”. I froze on my seat and turned around to see if anyone else noticed what happened but no one did. She promised to be out of my business once I helped her and I hope she keeps to her word.

The dust has settled somewhat. Karl is dead. Anthonia got what she wanted. But there was another problem. I could not imagine going back to live in my house. Life in that space will never be the same again. How can I ever get over the thought that someone was murdered and buried in my home?

The ghost house in Castle Estate had become popular and every realtor was avoiding it. The option of renting or selling it wasn’t feasible because everyone was afraid.

Anthonia is finally resting in peace but she has taken away my peace of mind. I can’t even imagine living alone again. Maybe I should just go back home to my mom and siblings.