Linus Idahosa, the president and CEO of Del York International, has in conjunction with Huffine Global, his United States partner, visited the Kingdom of Saudi Arabia on an investment drive mission.

The delegation’s visit followed that of US President, Joe Biden to the Kingdom, and they met with key government officials, investment fund managers, and strategic investors interested in taking advantage of partnership opportunities between the Kingdom, the United States, and Africa.

The Del York CEO was part of a select team of business interest follow-up mission to the Kingdom to expand on established protocols and opportunities between the US and Saudi Arabia initiated during the previous week of the Presidential visit.

While on the visit, Idahosa met with a number of key stakeholders and investor groups who indicated a very keen interest in exploring partnerships in the US and Africa in key areas such as Agriculture, Energy (Gas & Power), Defence, Transportation, Education, Mining and Tourism.

He also took the opportunity to pitch his company’s ongoing partnership with the Lagos State Government for the development of a multimillion-dollar film city project soon to commence in Epe.

Commenting on the visit, Linus Idahosa said the team is hoping to introduce a number of high-powered investors, who have formalised partnership arrangements with the team on the trip to mutually beneficial opportunities with partners at the subnational level with important private sector operators in Africa.

According to him, Nigeria at this time is in dire need of dollar-denominated capital, and the opportunity offered by the trip could not have presented itself at a better time.

“Expectedly, our partnership with the Lagos State Government to develop a major Film City project in the state is top on our agenda, but other important and interesting opportunities across other sectors which we believe will be of immense benefit to the business community back home were concretised over the course of this visit,” Idahosa said.

The US delegation led by Edward Huffine, the president of Huffine Global Solutions, accompanied by Sultan Alsadoon, the CEO of the King Abdullah Global Humanitarian Fund, a special representative to the Crown Prince, and a team led by the President of the Financial Coordination Centre (FCC) met with Saud bin Nahar bin Saud Al Saud, the governor of the Mecca Province of Taif. 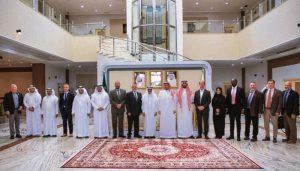 The delegation also met with ministers, heads of multiple Saudi investment fund groups, among other influential high-level chief executives, who indicated a firm interest in exploring and executing the business opportunities.

They are expected to leave Saudi Arabia upon completion of their engagement with other high-level state functionaries during the week.

Fast and luxurious: Three of the world’s best jets in 2022

A saint and a sinner

The Benefits of Aligning Your Personal and Business Branding