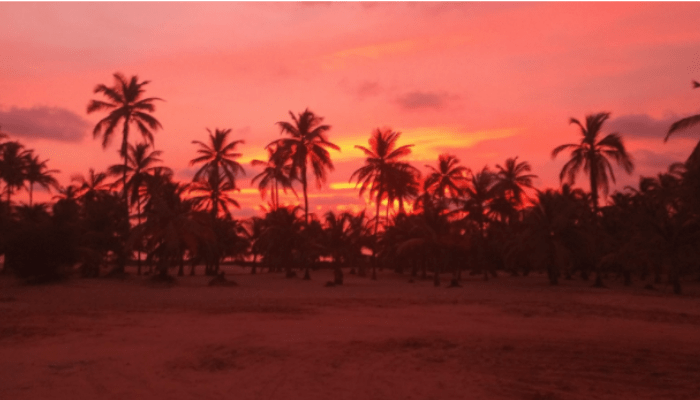 The by turns sandy, congested, and stifling, the predictable urban Lagos-leaning buildup that has become Cotonou may prove fatiguing for the visitor, but the newly-constructed beach road west from the airport offers a hard-to-beat opportunity for the novice or more serious walker or runner to stretch out, breathe some fresh air, and recharge. A right turn at the Erevan roundabout, 200 meters south of the airport’s arrivals exit, puts you on the fast track straight out of Cotonou’s urban wahala. A 10-minute drive from the airport will drop you off on a sandy track smack dab on the beach, with the occasional coconut vendor or fishing village to keep you company.

Less than a kilometer later, the beachside buildup falls abruptly away in favor of the breezy, open beach on the airport runway’s southern, ocean-side approach, a further 1.5 km brings you to Fidjerossé roundabout, which, though somewhat congested at rush hour, offers a choice of surfaces: the wide, ocean-side tarmacked dedicated pedestrian walkway, a lightly used feeder access road, or the beach itself for an uninterrupted stroll or run for 5, 10, or 20 km out-and-back stretches.

A recent beach coconut grove reforestation initiative immediately west of the Fidjerossé roundabout has enhanced overall beauty.
Although Cotonou’s urban plan forbids further development between the road and the shoreline, some see this ambitious new road as an environmentally-irresponsible initiative aimed at expropriating long-standing fishing villages in favor of jumpstarting luxury real estate developments stretching west along the coast, just north of road.

The new paved road extends along the beach for 10 km west from Fidjrosse roundabout, with traffic steadily peeling off until it dead ends. With solar street lamps the whole way for the committed night runner, security issues are rare-to-nonexistent. Beyond this point, one may cut down the short distance to sandy tracks directly along the beach, cutting through coconut groves and fishing villages until emerging, 20 km beyond the famous Point of No Return monument in Ouidah.

Roughly halfway to Ouidah, a discrete sign and cleared swathe of land indicates the point at which the offshore natural gas pipeline from Nigeria comes onshore to feed the new power plant inland at Calavi.
If your seaside shuffling works up your appetite, there are a generous choice of food and drink spots scattered the whole way along the road. Whether it’s a down-to-earth fish fry spot, beachside coconut or pineapple vendor or more upscale oriented seafood or pizza, all restaurants have seating either directly on the beach or positioned to catch the steady ocean breezes from the southwest. If the beachside place is pumping the very Afrobeats you’re attempting to escape, keep moving along for a little way for a less amplified alternative. Some of the places making the most noise in the afternoon or evenings are havens of tranquility for the early riser or mid-day lounger. Some of the more formal restaurants are closed on Mondays; it’s worth checking. 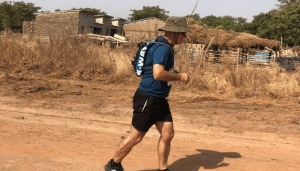 Meet up with friends at a beach lean-to for some weekend grilling on the weekend, or if you’re taking a mid-week break, enjoy the quiet tranquility of uninterrupted stretches of undisturbed beach.
Getting there and away: Call a Gozem (Uber-equivalent motorcycle or taxi) and have them drop you either at Erevan, the Fidjerosse roundabout, or further west out of town and then work your way back. 4G network works all the way along the beach to Ouidah.

Vaccine hesitancy and the place of empathetic communication

The case for consolidation in the Nigerian media industry