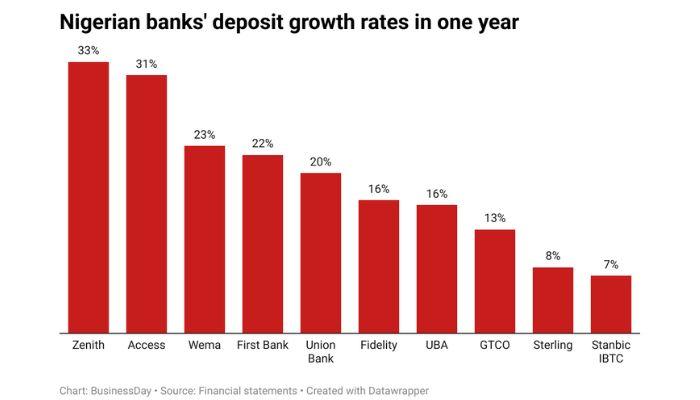 Zenith Bank Plc, Access Bank Plc and Wema Bank Plc saw their customer deposits grow the most in the 12 months to September 2022, an analysis of the deposits of 10 lenders shows.

Data compiled by BusinessDay from their financial statements show that the 10 banks grew their total customer deposits to N41.9 trillion as of September 2022, up 22 percent from N34.3 trillion in the same month last year.

“Total deposit base grew by 19.0 percent to N51.8 trillion in 2021 on the back of an increase in economic activities throughout the year. Tier-1 players again took charge, contributing 64.1 percent of deposits,” Victor Ndukauba, deputy group managing director, Afrinvest (West Africa) Limited, said last month at the presentation of the firm’s 2022 banking sector report.

Zenith Bank led the pack with the highest customer deposit growth of 33 percent to N8.04 trillion in September 2022 from N6.04 trillion a year earlier.

Wema said its customer deposits increased by 22.8 percent to N1.08 trillion in September, while that of First Bank rose by 21.7 percent to N6.6 trillion.

Union Bank of Nigeria Plc grew its customer deposits by 19.5 percent to N1.53 trillion in September, while that of Fidelity Bank Plc increased by 16.2 percent to N2.29 trillion.

United Bank of Africa Plc boosted its customer deposits to N7.03 trillion as of September, up 15.6 percent from a year earlier.

Analysts believe deposit money banks (DMBs) will see a significant boost in deposits on the back of the Central Bank of Nigeria’s plans to redesign, produce, and circulate new series of banknotes at N100, N200, N500, and N1,000 levels from 15 December 2022. The existing notes will cease to be legal tender on January 31, 2023.

“With the expected redesign of the naira notes comes the influx of cheap deposits into the banking system, invariably leaving more liquidity in the hands of banks to deploy in the relatively higher yield fixed-income market, as depositors bid their time for the deployment of the redesigned notes,” said Ayodeji Ajilore, an investment research analyst with ARM Securities.

He said for the purpose of this transition from existing to new notes, bank charges for cash deposits have been suspended with immediate effect and that DMBs should note that no bank customer shall bear any charges for cash returned/paid into their accounts.

Emefiele said customers of banks are enjoined to begin paying into their bank accounts the existing currency to enable them to withdraw the new banknotes once circulation begins in mid-December 2022.

Analysts at CSL Stockbrokers also expect more deposits within the system to lower funding cost as many of these deposits will likely come in as current and savings deposits.

“We also expect the banks will have more funds available for lending and investments post-CRR (cash reserve ratio) requirements and this should be positive for assets yields. On the flip side for the banks, we expect a lot of cash management expense and the portion of fees gotten from deposits will be lost for the period of the implementation,” they said in a note.

Tesleemah Lateef, a banking analyst at Cordros Securities Limited, said that from observation, banks had not since this announcement recorded a significantly higher deposit influx from customers. “We have the cashless policy system to thank for this,” she added.

“We await the banks’ full-year results to shed more light on the impact of this directive on deposit growth. Also, we expect pressure on the exchange rate as some individuals might opt to exchange their naira for dollars,” she said.