The lender’s profit dropped 38 percent to N2.08 billion compared to N3.38 billion a year before.

In a media briefing on the bank’s performance, the Executive Director of the Bank, Ebenezer Kolawole, explained that the bank was affected by the loss made on Agric loans and revaluation loss.

“We made a revaluation loss of N4 billion as we were short on foreign exchange, if not we would have performed much better in 2020” Kolawole said.

Bismark Rewane, CEO of Financial Derivatives Company said most Tier-1 banks did well in 2020 because they made profit from revaluation despite the challenging year but Unity Bank did not have this luxury.

The Central Bank of Nigeria (CBN) devalued the naira three times in 2020 and this translated into revaluation gains for banks with foreign exchange.

Also, Unity bank gave a total of N206 billion loans and advances to customers of which 86.9 percent were agricultural loans. 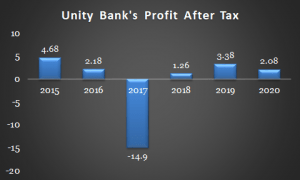 About N4.1 billion of the agricultural loans was classified as expected credit loss, this is 86 percent higher than the N2.2 billion recorded last year.

Kolawole also explained that Unity Bank had a reserve of N91 billion in 2020 but were heavily debited by the CBN and this also impacted their growth for the year.

However, despite a low yield environment in 2020, the bank grew interest income by 9 percent to N39.1 billion from N35.1 billion the previous year.

The lender’s Fees and commission income grew 6 percent to N5.2 billion from N4.9 billion a year before.

A loss of N1.62 billion was also made on other operating income compared to a profit of N 3.6 billion last year.

Depreciation of property and equipment dropped to N1.69 billion compared to N1.7 billion in the same period of 2019.

Why Nigerian banks have lowest staff costs per revenue