The banking industry lending rates have been on a downward trend since 2017 as seen in the economic report of the Central Bank of Nigeria (CBN).

A prime lending rate is the interest rate that commercial banks charge their most creditworthy customers.

Credit conditions in the banking system have improved supported by the CBN’s new policy measures announced in June 2019, which requires banks to maintain a minimum 65 percent loan to deposit ratio. 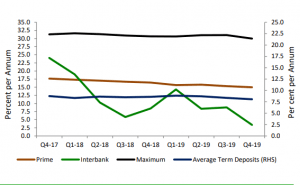 The Monetary Policy Committee (MPC), at its November 2019 meeting said it was hopeful that the Loan to Deposit Ratio (LDR) initiative must be sustained as interest rates being paid by borrowers have so far dropped by up to 400 basis points between June and October 2019. These have happened with corresponding decline in Non-Performing Loans (NPLs) to 6.5 per cent at the end of October 2019.

“These measures have placed our banks in a much better position towards supporting a stronger economic recovery,” Godwin Emefiele, governor of CBN said in December 2019.

Interest rates moved in tandem with the level of banking system liquidity during the fourth quarter of 2019 with developments in banks’ deposit rates mixed.

At its meeting last month, the Monetary Policy Committee noted that gross credit in the industry grew by N2 trillion between May 2019 and December 2019; channelled primarily to the employment-stimulating sectors such as agriculture and manufacturing, in addition to increased lending to the retail and Small and Medium Enterprises (SME) segments, which is expected to help boost domestic output growth in the short to medium term.

To retain the gains from credit expansion and current industry focus on lending, the committee advised the Bank to sustain its LDR policy and in addition continue to deploy its Differentiated Cash Reserves Requirement (DCRR) policy which directs new funding for greenfield projects and expansion to critical sectors of the economy.

The CBN at the last MPC meeting in January retained the Monetary Policy Rate (MPR) at 13.5 percent, citing comfort with its policies so far and the need to yet again, allow time to understand growth trend for the year.

In consideration of rising inflation and surging liquidity, the CBN last month raised the Cash Reserve Ratio (CRR) by 500 basis points to 27.5 percent from 22.5 percent since 2016.

Accessmore App: The mobile banking application changing the face of banking in Africa