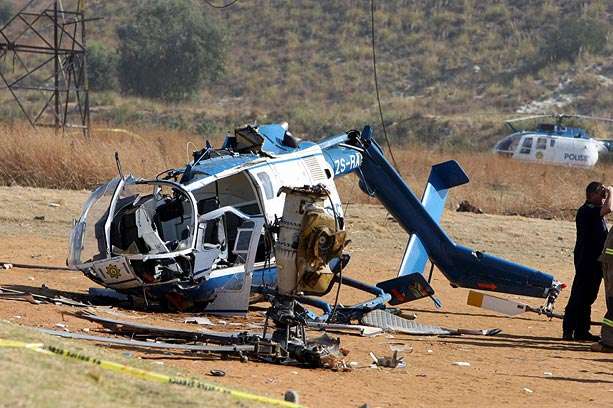 The report of the Caverton Augusta Westland 139 Helicopter 5N-CML crash in Kabba, Kogi State, involving Osibanjo was among four final accident reports released by the Bureau, which also issued another nine safety recommendations.

Other reports released are the Aero Contractors Bombardier Dash 8-Q-400 with registration 5N- PBU in 2017 and two crashes from the International Aviation College (IAC) Diamond aircraft DH40 and DH42 with registrations 5N- BNH and 5N-BRM, respectively.

Akin Olateru, commissioner and chief executive of the AIB, who released the reports, attributed the crash of Vice President Osinbajo’s aircraft to ‘brownout’ which caused the crew to lose visual as well as misjudge distance from the ground to air.

The AIB commissioner said the Bureau was able to issue two safety recommendations with regards to the Augusta crash of 2nd February 2019, including one to the NCAA and another to the Office of the National Security Adviser.

He reeled out the causal and contributory factor of the crash, stating that the flight crew encountered a brownout condition during the hover to land, which led to the loss of external visual references, spatial disorientation, and loss of situational awareness resulting in a misjudgment of distance and ground clearance.

He also attributed contributory factors to inappropriate landing technique used, non-adherence to company procedures for known or anticipated brownout condition during landing and lack of risk assessment, limited landing site preparation and planning prior to commencement of the flight.

“Another safety recommendation 2020-002 has been issued to the Office of the National Security Adviser as it should consider whether the Presidential Air Fleet (PAF) Unit should be involved in the coordination and preparation of all high profile Executive VIP mission (flights) in order to ensure that all Executive VIP flights are conducted in accordance with the PAF Unit’s Standards and in line with its approved operating procedures,” it said.

The other incident involving an AeroContractors Bombardier Dash 8-Q-400 with registration 5N- PBU according to the commissioner was not reported to the Bureau which found out via social media.

According to the AIB, scheduled flight NIG316, while cruising at FL240, 80 NM inbound Lagos from Port Harcourt, experienced bluish smoke which gradually increased in density within the cabin.

The smoke progressed into the cockpit. The lavatory smoke detector aural warning activated, and the AFT baggage light illuminated on the Fire Panel but there was no burning smell perceived.

It identified causal factor as engine oil leaked onto a hot surface of the engine causing fumes which mixed with the engine bleed air supply to the air conditioning system, resulting in smoke in the aircraft cabin, cockpit and lavatory/ cargo compartments.

The two Safety Recommendations made were,” Safety Recommendation 2019-024: Aero Contractors Company of Nigeria Limited should ensure that Cockpit and Cabin Crew are alive to their responsibilities during emergencies vis-à-vis establishing effective two-way communication.

“While the second, Safety Recommendation 2019-025: Nigerian Civil Aviation Authority should ensure that operators utilize the New Oil Analysis Technology made available by Pratt & Whitney Canada in order to identify an impending failure of the carbon seals on PW150A engines that are yet to comply with SB 35342R1.”

According to the commissioner, safety recommendations for Diamond DA-42 5N-BNH are as follows:

“Safety Recommendations 2019-026: NCAA should intensify its oversight on International Aviation College (IAC) and ensure that it adheres strictly to the use of Checklists and appropriate procedures during all training sessions and phases of flight.

“Safety Recommendations 2019-027: International Aviation College (IAC) should improve on its Crew Resource Management training vis-à-vis the need for trainees to be assertive when necessary.

“Safety Recommendations 2019-028: NAMA should devise means to ensure duty air traffic controllers, DATCOs, maintain a continuous watch on all aircraft movements within the vicinity of the aerodrome.”

Diamond DA-40 attracted Safety Recommendations 2019-029 which states that International Aviation College (IAC) should have in place a stringent flight training policy to discourage disruptions of students’ training during the stipulated period.

“Safety Recommendations 2019-030: International Aviation College (IAC) should develop and incorporate in their training manual, procedures to ensure that corrective actions are developed and implemented to prevent observed deficiencies such as ‘exceeding required minimum hours for solo flight’, duly signed out by Instructors and records kept in the student’s file prior to conducting a solo flight,” it said.