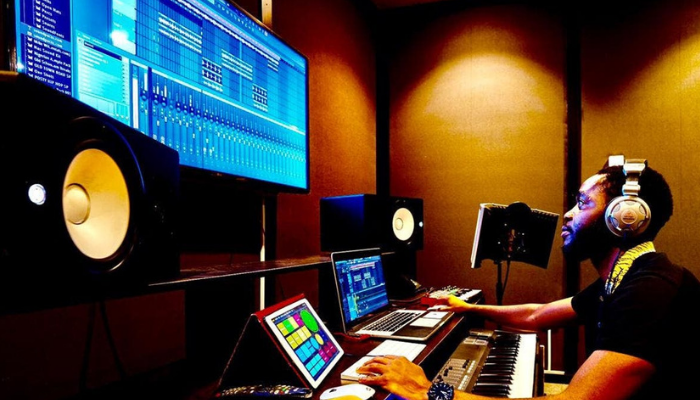 As global attention shifts to Nigerian creatives following Grammy Award wins for Burna Boy and Wizkid, another major achievement has been scored with the launch of a multi-functional world-class Ogidi Studios in Lekki, Lagos.

Dignitaries and stakeholders who attended a two day launch ceremony in Lagos left with a big impression and renewed confidence in the global dominance of Nigerian talents and content production.

Ogidi Studios is nestled on two-floors and equipped with the latest cutting-edge technology in audio recording and video production. Among the studio’s star attractions is the Neve Genesys Black console, a delight for sound engineers and producers due to its multi-functionality of bridging the gap between analog and digital. Complementing these is an imposing green screen 17 by 11-foot green screen with adjunct tastefully furnished spaces such as dressing, beauty, make-up and waiting rooms.

Describing the studio as a revolution in entertainment production, Yemi Osibanjo, vice president of Nigeria, in a video message relayed on a giant screen at the occasion lauded the founder, Idris Olorunnibe and his team. He said, “With the Ogidi Studios, Nigeria now operates on the same level of sound and video technology with major global players. Now the stars, not just Nigerian stars, but from all over the world have a place in Lagos that is as good as any studio they have ever recorded in”.

“World-class script writing, music recording, video making, and editing, can take place under one roof, at the Ogidi Studios. The entire value chain in music and entertainment can now be local. So, we are at the cusp of a revolution in entertainment production, creative talent and services, and a major economic opening for business in Nigeria”.

Speaking separately at an event to mark the launch of the facility, Sunday Dare, Minister of Youth and Sports Development lauded the founder of the facility, Idris Olorunnimbe for his foresight and intervention to put Nigerian creative on the same pedestal as global players.

While announcing a pledge to sponsor the training of 1000 youths at Ogidi Studios, Dare explained that the launch of the studios “resonates with our youth because it excites and employs our youth.

“I see that the future of some of our youths would be built here. The most important task for me is to announce a partnership between the federal government through the Ministry of Youth and Sports Development. We would support and train 1000 Nigerian youths in 2 to 4 weeks courses”, he said.

“We want to make sure that every month a hundred of them come here, we will pay full expenses, they can get certified and they can become entrepreneurs, creators of wealth, employees of labour and also contribute to national economic development. We are committed to that on the part of the Federal Government.

On his part, Governor Babajide Sanwo-olu, said, “I am here to endorse this project in tandem with our economic agenda, which is project THEMES. The E stands for Entertainment and Tourism. The future is for our young talents and with facilities like this, it is how much they can grab without holding back.

As a Government, we have consistently shown and demonstrated our support to the creative industry. We have partnered with Ebonylife Productions to train youths in their academy. We are also in collaboration with Del York to train between 500 to 1000 youths in their online programme”.