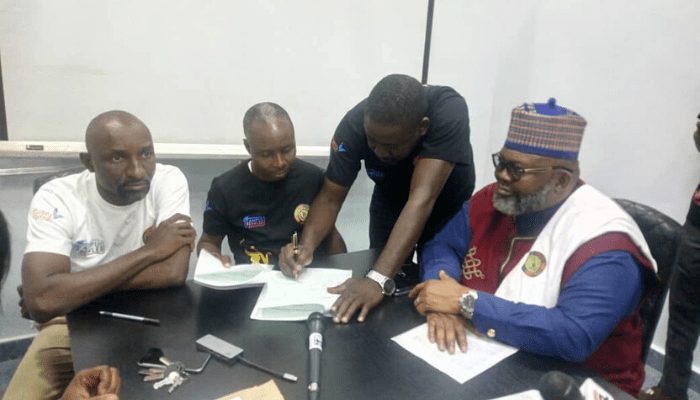 Plume and Partner Limited, a creative content development company, is sponsoring the deal through Campus Prowler, its subsidiary. The production agreement with SONTA was signed in Abuja on Wednesday by Professor Alex C. Asigbo, president of SONTA, and Samuel Bob-Manuel, chief executive officer, Plume and Partners Limited, on behalf of their respective parties.

The theatre production deal is expected to involve over 45 universities and 20 collages of education offering courses in Theatre Arts in movies and documentaries production tagged, Project Hostage, an acronym for Harvest of Stage.

The project with the production cost put at about N1 billion is aimed at bridging the gap between stage and the screen, script to screen play and between theory and practical.

The agreement will culminate in the production of 35,000 hours of audio-visual programmes, spanning 90 epic and contemporary movies of about 120 minutes, 45 minutes advocacy documentaries on any issue of interest and 45 campus series of 20 minutes by the various theatre arts departments of high institutions across the country.

Speaking on the project, Bob-Manuel stated that his company was motivated by the need for quality content in the country’s movie industry.

He believed that coming from the professionals, the production would not fall short of standard in both artistic and technical contents.

He disclosed over 88 professors, 122 doctorate degree holders, as well as, over 10,000 theatre arts undergraduate students would be taking part in the audition to be conducted in various set roles.

“Theatre Arts departments are expected to develop scripts for entries in the different categories while Nollywood actors shall be included in lead roles in order to give the movies commercial value.

“Project Hostage shall have a strong academy of judges made up of one nominee each from member universities of SONTA and five nominees from Plume & Partner Limited to rate performances in various categories of awards, which include the best picture and the best actor of each season”, Bob-Manuel explained.

Bob-Manuel added that the partnership would create opportunities for undergraduates of theatre arts to make entries into the movie industry as they would be featuring in the script developed by respective universities.

Describing the project as the biggest production deal in Nigeria, with SONTA, Bob-Manuel said that, “Though we are not discarding those already in the field because they brought the industry this far. So, to give the production commercial value, actors should be part of the production.

“It is also a very big opportunity for streaming companies, who should go into Nigerian market with the production that we are into partnership with SONTA.”

He assured of the participation of intellectual and creative expertise to make the project a success. “It will generate job opportunities for artistic and technical crew, as well as, the undergraduate students not less than 10,000 across various universities who would be vying for various roles in the course of the production. We thank SONTA for giving us the opportunity to work with them”, he concluded.

Also explaining the project further, Professor Asigbo, the SONTA helmsman, noted that the project would avail every university offering theatre arts the opportunity to be represented in the production.

According to him, heads of respective theatre arts departments will liaise with lecturers to emerge with quality creative content that will not only meet the yearnings of the viewing audience but will also have commercial value.

To ensure that only the best are selected for production, Professor Asigbo informed that there would be academy of judges that would be drawn from among lecturers in every theatre arts department for screening and selection of the best scripts from both regional and national levels.

Considering that theatre arts department involves a lot of creating writing, he was optimistic that involvement of the academia in movie content would boost the industry with quality content that would take care of several unprofessional movie contents in the market.

For the sake of the project, the president stated that some theatre arts graduates who are already professionals in the field and whose appearances will enhance the production would be brought in to feature alongside the younger generations of artists.

“Every head of theatre arts department is a member of SONTA and they are aware of the kind of contents that are required for the project. If not for the break across the country, scripts would have started coming in but they are being developed in all the universities on the various genres of arts including documentary, epic and contemporary movies, soaps and series.

“So, all the heads of theatre arts departments are aware of the partnership. As such, the scripts or contents will not be a problem because that is our work. We are only hopeful that Plume will be able to contain with the deluge of scripts that would be coming from our members.

“For us, it is like a competition for the various theatre arts departments. At that level, the head of departments can liaise with the lecturers in looking at the scripts in terms of quality of content and how it will impact the society when produced”, the professor said.

He urged every university to come up with as many scripts as possible, but also bear in mind that there is a minimum pattern that every script should meet up with before it can go for production.

However, Plume and Partners Limited has stressed the ability and capability of the company to produce as much contents as would be available.

According to the company’s boss, production begins immediately the scripts are ready.

Excitement as Big Brother Naija returns with Season 5 in July

Excitement as Big Brother Naija returns with Season 5 in…