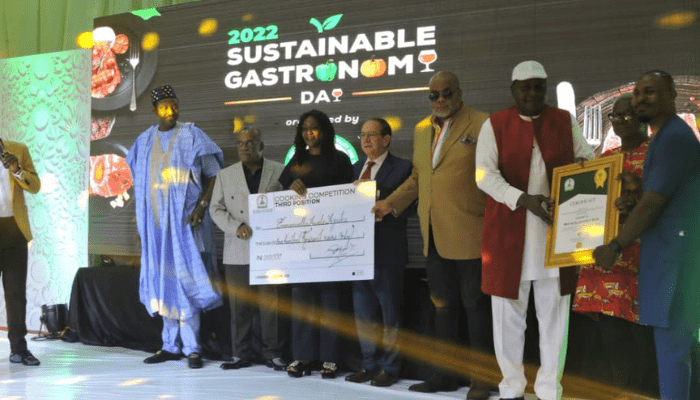 In the last six years, June 18 of every year has been dedicated to the observance of Sustainable Gastronomy Day globally. The observance was predicated on the adoption of United Nations General Assembly Resolution 71/246.

However, Nigeria did not join the global community in observance of the day until in 2021, when against the challenges posed by the impact of the pandemic, the National Institute for Hospitality and Tourism (NIHOTOUR) held the first ever Sustainable Gastronomy Day (SGD) in Nigeria.

The 2021 edition, which was the fifth to be marked globally and first in Nigeria, was a huge success with over 1500 attendees across industry stakeholders; including government agencies, private sector and related businesses.

Riding on the success of the maiden edition, NIHOTOUR rolled out more drums for the second edition this year, which held on the theme: ‘Placing Nigerian food on international map’.

Amid the fun at the International Conference Center, Abuja, the convivial venue for the ceremony, the participants were drilled on the need for collaboration in promoting Nigerian foods and cuisines for both domestic and international consumption. The promotion, according to the organisers, was imperative for entrenching sustainability and food security for the country, as well as promoting Nigerian food culture across the world like the Americans, French and Asians are doing with their cuisines that are now on the global menu.

Offering the rationale for the observance of the Sustainable Gastronomy Day in Nigeria on June 18, Nura Sani Kangiwa, director general, NIHOTOUR, in his welcome address highlighted the rich cultural diversity of Nigerian cuisines, noting further that the diversity and richness are enough credentials to put the country on global map as a preferred gastronomy destination in Africa for the global tourism community.

“Nigeria is the most competitive Gastronomy tourist destination in Africa. This can be found in the diversity of our ethnic groups and corresponding unique foods culture”, he said.

Looking beyond just the cuisine to the economy of food, the director general disclosed that elevating Nigerian cuisines to global standards would make our food a veritable tourism product amid high demands and multiplier effects, especially job creation for the unemployed youths.

“The abundance of Nigerian cuisines exhibited here, today, are reflective of Nigeria’s gastronomic beauty and diversity. The cuisines poignantly reveal the ‘farm to table’ processes which signposts the economic multiplier-effects and social value of a thriving tourism industry”.

He assured participants at the one-day ceremony that NIHOTOUR would continue to intensify efforts at hands-on-skill training for youths and professionals in the travel tourism and hospitality industry in order to place the nation’s tourism and hospitality industry in the right position as an economic activity for the socio-economic benefits of the country.

Earlier, while declaring the ceremony open, Nora Ladi Daduut, a professor, senator and vice chairman of the Senate Committee on Culture and Tourism, noted that Sustainable Gastronomy Day is beyond the one-day celebration and more of a call-for-action on food security and promoting the Nigeria’s rich food culture to the world.

To promote Nigerian food across the world, the senator insisted that there has to be food security in the country first, which should also be in the front burner of our national discourse.

“Today’s celebration is a further call on the government and all stakeholders to intensify efforts on food security because food is a basic necessity, and food security will not only fight hunger, but also eradicate poverty. But food should be both available and affordable to the people”, she concluded, while urging NIHOTOUR to sustain the celebration in order to put Nigeria on the food map of the world. 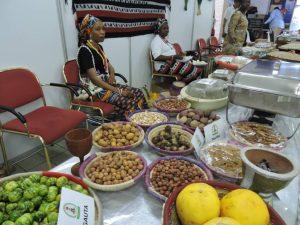 From the government perspective, Ifeoma Adaora Anyanwutaku, permanent secretary, Federal Ministry of Information and Culture, the supervising ministry of NIHOTOUR, said that government is committed to the growth and development of Nigeria’s cuisines for internal consumption, as well as, for export, which is a sure source of foreign earning.

Considering the vast fertile land across the country, the permanent secretary, who was represented by Patricia Narai, director, domestic tourism in the Ministry, she said the country can grow enough food to feed her populace and the world, but that such ambition can only be realistic when more Nigerians go into farming even if it is at subsistence level.

Other speakers including members of the Diplomatic community also commended the NIHOTOUR for the gesture, which, according to them, is drawing global attention to Nigeria.

The Chinese community was on hand to extol the NIHOTOUR team and also present their food offerings to Nigerians.

Later in the ceremony, winners of the institute’s essay competition were rewarded. They are: Fortune Obasi of Salem Academy Abuja, the winner; Emilia Etuk of Government Secondary School Kubwa, Abuja, second place, and Seyi Otitoniyi of Premier Academy Abuja, who came third.

While the overall winner went home with N250,000 and additional N100,000 from Samuel Alabi, BOT chairman of the Federation of Tourism Association of Nigerian (FTAN), the second and third place winners went home with N150,000 and N100,000 respectively.

Another highlight of the occasion was the unveiling of the NIHOTOUR Mobile Training Kitchen, an initiative that is first-of-its-kind by NIHOTOUR to upscale the outreach of its hands-on training in cookery and hospitality management.

Yet again, the main action was the food exhibition, where food menus from different zones of the country were presented and tasted by the waiting participants, though led by the NIHOTOUR director general and other dignitaries.

From the East, West, South South, North East, North West and North Central, NIHOTOUR repackaged and presented food for all taste buds. The private sector took advantage of the exhibition too, with the likes of Danone Fan Milk, Delifrost, Startimes, Association of Professional Chefs of Nigeria, Mila Kitchen, Association of Mushroom Growers and Marketers of Nigeria, FCT Tourism, among others.

On the foreign menu, Ethiopian Embassy, Spanish Embassy, Chinese Embassy all brought their countries’ menu to Nigeria at the ceremony, with many eating their fill.

At the gala and investiture night, marking the end of the one-day celebration of the 2022 Sustainable Gastronomy Day, there were displays of specially curated food amid live band music, drinks and networking by the guests.

It witnessed many exciting activities. One of them was the presentation of prizes to the winners of a cooking competition.

But the investiture of some dignitaries with Fellowship Awards was a major highlight of the award night.

The five awardees of the night include; Samaila Muhammad Mera, Emir of Argungun; Appolus Chu, Oneh-Eh Nchia X of Eleme Kingdom; Kabiru Adelaja Agbabiaka, Osola of Isolo; Ifeoma Adaora Anyanwutaku, permanent secretary, Federal Ministry of Information and Culture; Samuel Alabi, chairman, board of trustees , Federation of Tourism Associations of Nigeria and Nike Okundaye, founder, Nike Art Gallery. They were honoured by NIHOTOUR for their various contributions to the promotion and development of the tourism industry in Nigeria.

The climax was the unveiling of the new logo for NIHOTOUR Gastronomy Festival by Nura Sani Kangiwa, director general of the institute, who also promised to sustain the festival as an annual event, while working to make every year’s event surpass the previous editions.